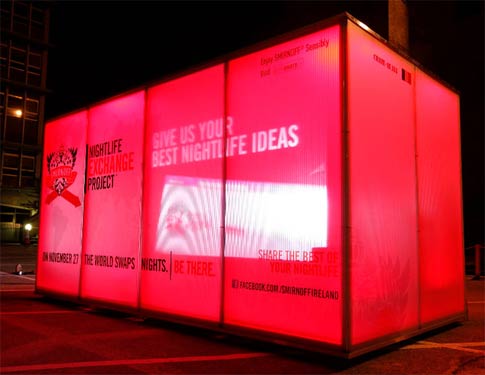 Early this year, I got the opportunity to travel to Johannesburg courtesy of Smirnoff’s Be There campaign with the result being a fruitful trip into the Shangaan Electro scene amongst other things.

Smirnoff’s latest idea is called The Nightlife Exchange Project and it sees 14 countries swap nightlife for one night on the 27th of November. Argentina, Australia, Brazil, Canada, Germany, India, Ireland, Lebanon, Poland, South Africa, Thailand, UK, USA and Venezuela will all be sending a crate containing the best of their country’s culture to its chosen destination.

Smirnoff are looking for the suggestions from you on their Facebook page on what best represents Ireland’s nightlife. Your suggestion could be an Irish band or DJ, garlic cheese chips, fashion, artwork or anything that makes a good night out. POD’s Siobhan O’ Dowd will then curate public suggestions on what fills the Irish crate before it gets sent off to its final destination.

Even better, you can win tickets to a Nightlife Exchange event in another city in the world on the 27th of November with 3 friends and that’s really worthwhile.