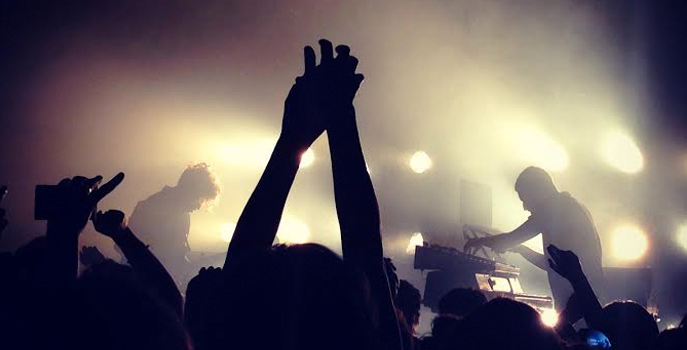 Kelis and The Strypes complete the Sea Sessions lineup

Nicolas Jaar is only 24 years of age but has cultivated a reputation for sonic composition that crosses the divide between dance, electronic, ambient, jazz and neo-classical. The Chilean/American’s outlook is worldly, his music is otherworldly (just like his label, which is called Other People).

Darkside, his collaboration with Dave Harrington, his latest project, was arrived at naturally after the acclaimed debut album Space Is Only Noise. The pair came to Darkside with a depth of musical knowledge and experience that most bands just do not have.

If, like me, you were expecting chilled Tuesday night grooves (the first time I saw Darkside at Sonar By Day it was exactly that) from the show, think again.

Last night’s set at Hidden Agenda in the Button Factory in Dublin was an applicable blend between sensory ambience and groove-based dance music. Where Psychic spends much of its time building up to a groove and disintegrating, those subtle changes in tempo where a song kicks from a build to a beat were festival-sized. ‘Paper Trails’ swirls from a funk organ passage to beats, lilting on record but room-shaking here.

Jaar and Harrington’s musical inventiveness means less reliance on sticking to a 4/4 beat even when employing it to such big effect. Harrington’s funk guitar lines stick close to the groove at times, while most other times, the solos over percussive hits and synths are old-school bar blues riffs. That lends the music a timeless, weightless quality.

There’s an attention to detail from all perspectives. The band bring in their own sound desk and visual setup which, was intricate, moody and muted. Like the flip of a coin on an axis (and the album’s front cover), a giant circular mirror reflects light and motion back onto the audience. Actual smoke and mirrors.

‘Golden Arrow’ is 11 minutes on record but could have easily doubled that length last night. It was hard to tell where songs ended and others began. There were fluid movements between each. Whether they diverted into a house jam breakdown, a scrape of ambient noise, dance-funk, or plodding pleasantness, it was all utterly engaging.

It was hard not to get carried away at a show like this. Jaar is a future artist working in the present and Harrington is his perfect foil, focused but with a loose grip. Where Jaar’s own show features a willingness to experiment on stage, Harrington helps focus the range of sonic explorations to the understated palette that Darkside occupies.

Where there were moments that the music felt peerless other times, it reminded me of Air’s Virgin Suicides soundtrack, foreboding, stalking yet teeming with much more physicality. It was less referential to the past.

The only conclusion you can draw from seeing something so masterful is that everyone else has to step up to Darkside’s level now. You can catch them again at Body & Soul.