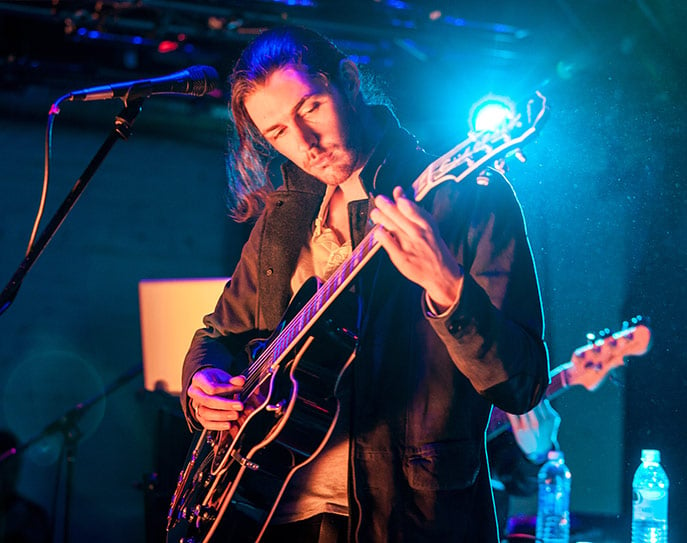 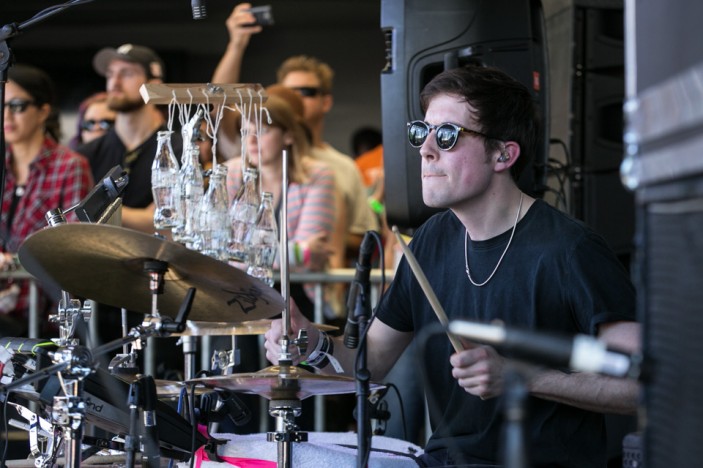 Photo by Glen Brown for TLOBF.

The first set of my entire six-day SXSW experience was also one of my best. In a packed Spotify House, the London music collective Jungle, whose soulful throwback pop productions have brought them an XL Recordings deal, were revealed, unlike their artwork and videos, which would suggest the work of two black Londoners, to be fronted by some very white guys.

As initially diverting as that is (like that moment when you discovered Average White Band were actually British not American), their Avalanches-esque music with singers channels the Bee Gees’ style of singing and pairs it with nostalgically-charged sunshine soul. This is music made for good times, regardless of the throw-off image tactics.

On a tiring last day in Austin, there could be no better solution than Melt Yourself Down to take you from that afternoon to evening lag with an invigorating set in the British Music Embassy’s Latitude 30 building just off 6th Street.

The London band ply a soundclash-style of Afro Egyptian funk with emphasis on Pete Wareham’s Cairo-influenced sax and dirty stankin’ rhythms. Singer Kushal Gaya is the suitable ringleader goading the crowd, the bar staff and his fellow musicians into a stirring sweaty club vibe. Melt Yourself Down would be a fine addition to almost any festival.

The new kid on the Top Dawg Entertainment label, held his own at the iTunes Festival at SXSW (incidentally, ACL at the Moody Theatre is one of the nicest kitted-out venues I’ve ever been in). The Tennessee’ rapper has no problem filling the large, large stage for an energetic performance. Tracks like ‘Soliloquy’ and ‘Ronnie Drake’, the latter featuring an appearance from sizzling new TDE label singer SZA leave enough of a mark against what follows that night – Schoolboy Q and Kendrick Lamar. 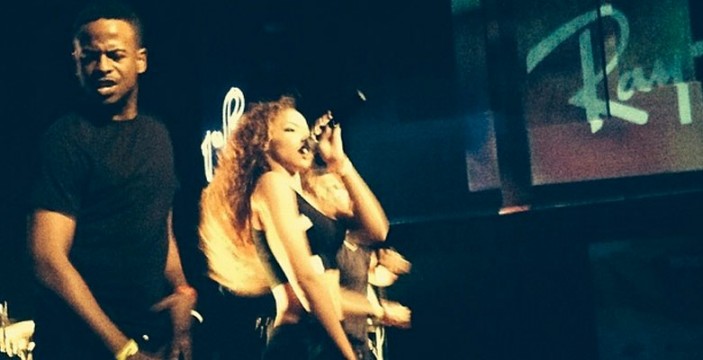 Tinashe has been an actor turned R&B singer in limbo for a bit musically and while her set of body-poppin’ R&B is very enjoyable, there’s something off about a choreographed short set from a svelte LA actor/model/singer at Boiler Room. The girl has some tunes though and DJ Sounwave is on hand, along with two male dancers to lift the set. The only problem, in a Boiler Room context that there’s a fine line between trying too hard and owning that shit. Tinashe doesn’t quite transcend the platform, there’s a bit of lip synching in there and it feels more like a potential pitch to an underground audience than an easy sell. In the right context, and aimed at the right market though, Tinashe should be huge. 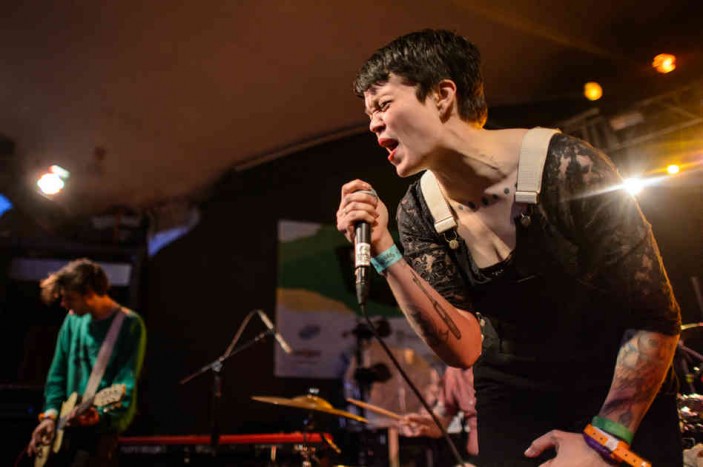 Sometimes you just need a blast of no-nonsense ferocious rock and Perfect Pussy’s lacerating music is it. The sound of a relentless rock band with punk and hardcore at their core, the Syracus’ New Yorkers is filthy and furious. There’s no time for any song structures, just balls-out tongue-out spit-friendly rock music that doesn’t want to stop. Meredith Graves’ unintelligible vocals lead the way, and through her words are not discernable, her tone sharp and full of character leads the sonic equivalent of a barrel roll down a large hill. 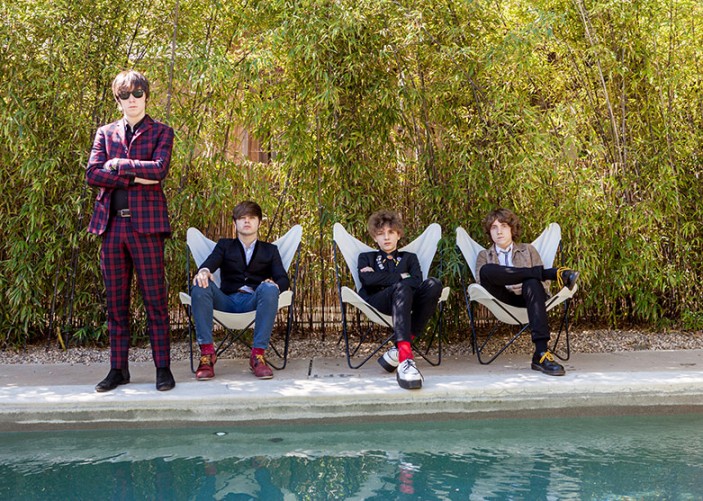 Photo: James Goulden.
Look, we all know the deal with the Strypes by now. Most pertinent to their future is how they can transcend their narrow set of influences if they are to make a career out of it (though the band do suggest punk and new wave to me as recent listening / influences on new album recordings).

For now though, the band, who were awarded the SXSW Grulke Prize winner for Developing Non-US Act for their SXSW shows, stick to what they do best, and that’s provide a rip-roaring standout uncynical set of bluesy rock’n’roll that is youthful in its exuberance and infectious in its delivery.

Representing recent facets of the Chicago underground, DJ Spinn and Rashad are the main proponents of the city’s footwork and juke scene, taking in old-school turntable skills, stuttering 808 rhythms and towel-waving hype MCing to make for a vibrant fun time dirty bass set to shine to. Their set in Elysium at the Resident Advisor party is a rinsing partystarter.

Unlike Tinashe, DJ Mustard at Boiler Room makes perfect sense – a topline producer in the spotlight. The man (first name Dijon) in the producer’s chair for hit rap songs trailed by that “Mustard on the Beat” ident plays 45 minutes showcasing his own beats which includes Young Jeezy’s R.I.P., Tyga’s Rack City, 2 Chainz’ I’m Different, Ty Dolla $ign’s Paranoid, YG’s ‘Who Do You Love?’/ ‘My N***a’ and more. There’s room for some nods to influences – Da Luniz, Eazy-E and Mac Dre is spotted in there too.

He’s just been signed to RocNation so expect to cut it to more DJ Mustard from now on. 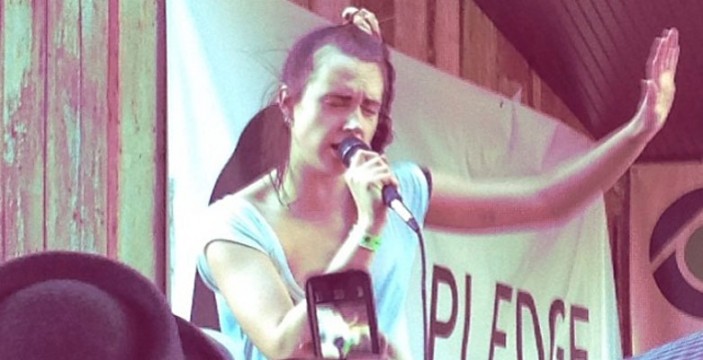 One of last year’s SXSW success stories on a victory lap the month her debut album No Mythologies To Follow drops. In the backyard of a bar on Rainey Street it was good to see her particular brand of electro indie pop hasn’t diminished but improved. The current creme of Danish pop, who knows how to work a stage and a crowd and delivers crowdpleasing numbers to boot. There’s even room for a cover of Spice Girls’ Say You Will Be There and she makes it her own.

Other sets that I enjoyed: