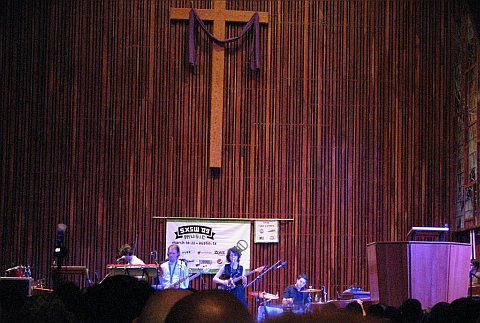 I’ll be more verbose in my State.ie review later on but right now a quick recap. Austin during SXSW is competely mental. It’s like an indie mardi gras. Everywhere you look there is a band playing on a stage. The main thoroughfare is 6th street, a colossal sized strip of concrete on a grid which seems to serve the only purpose of being a street lined exclusively with hundreds of venues, takeaway food, bars and some t-shirt shops. Lots of the venues are like Eamonn Dorans but amplified by 100, there’s just so many dodgy bars with stages (but with a bit more charm). On top of that there are many many many outdoor stages that allow you to take advantage of the beautiful weather here.

Here are the highlights of the bands today in brief:

Absolute Highlight:
St. Vincent – Annie Clark playing in a seated Presbyterian Church alongside Department of Eagles, Camera Obscura and more. Cracking. She’s got a new record out in May called Actor which is directly inspired by Disney films like Snow White. Inspiring stuff. Here’s the opening track from the record and the opener from tonight’s show. What a song.

Here she is playing ‘Marry Me’ from about four hours ago..


Biggest douche? Graham Coxon giving out about the crowd at Fader Fort not listening to his morbid alt-folk compositions and insulting their intelligence in the process.

Tomorrow the Irish stuff begins amongst everything else… Now to sleep. More photos here with more to follow from Dan Dennison.