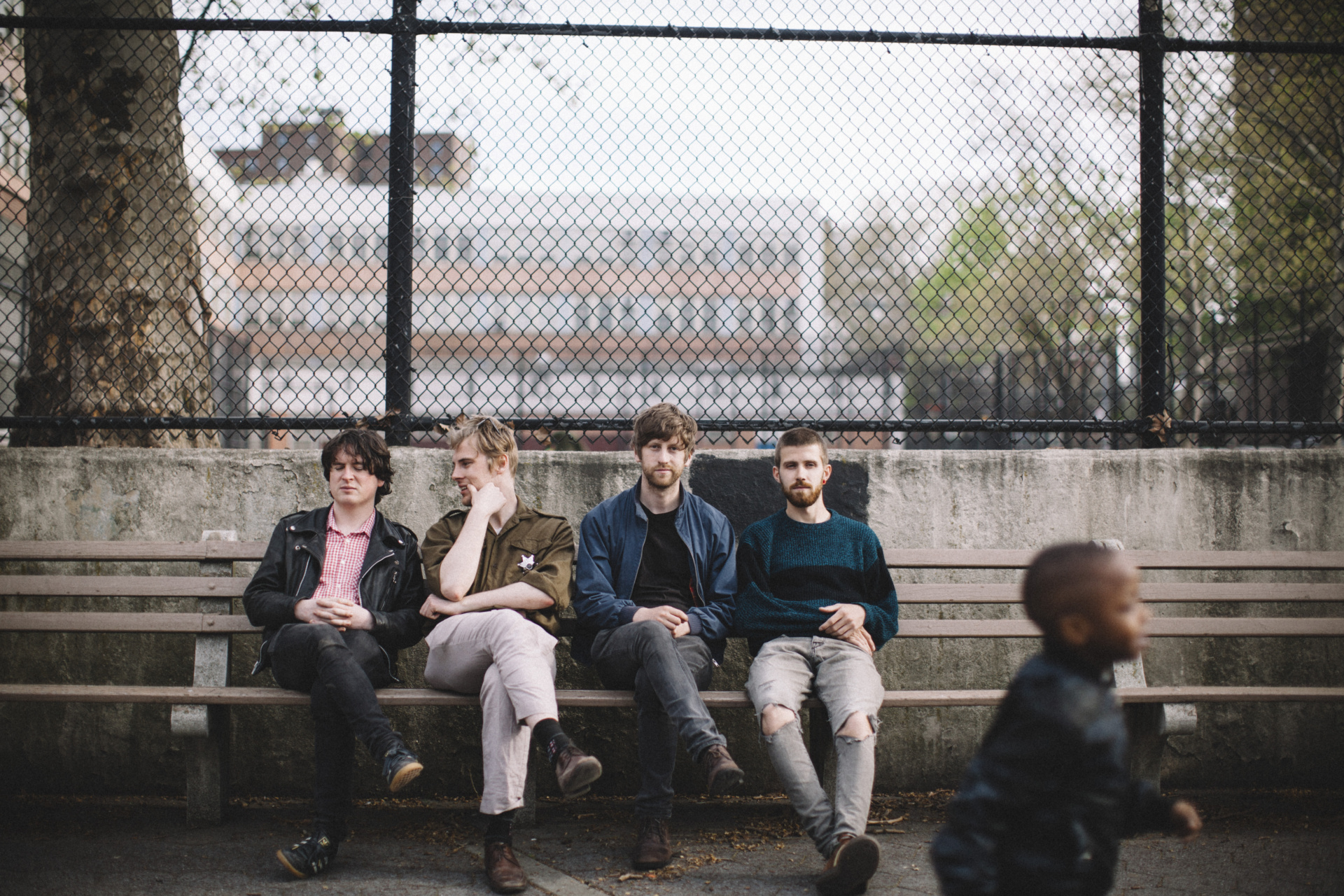 "You know, when we came back to start writing we were like 'let's not book any shows. Let's not do anything on social media or anything like that. Let's just go in and write because any sort of momentum was long gone at that point.'"

Most bands would be disillusioned to find that “any sort of momentum” they’d built up off the back of their first album had disappeared.

Not so Girl Band.

Instead, Alan Duggan gives the impression that the band were more than a touch relieved about the situation the Irish noise group found themselves in at the creative inception of The Talkies – their soon to be released second album.

The band had been quietly building a following since first releases in 2012, though that trajectory went stark skyward following the critical and public reception of their debut full-length Holding Hands With Jamie.

Suddenly, perhaps unexpectedly, this industrial-tinged, no-wave leaning noise group from Dublin were on KEXP, booked for big shows across the Atlantic and being held aloft as the most exciting band to emerge from the nation this side of the Y2K scare.

Shows were pulled, tours were cancelled and the group announced that they would be taking an indefinite hiatus in 2017. They were gone – until they weren’t.

Rumours circulated at the dawning of the year that Girl Band had recorded a new album. Sure enough, the group announced the release of a new single ‘Shouderblades’ in May. A follow-up, ‘Going Norway’, was released a couple of months later with the official announcement that The Talkies would be released on September 27th.

Naturally, we were eager to catch up with the group ahead of the album’s release to talk through just how The Talkies came to be and to see what, if any, plans the band had going forward. So we did just that, sitting down with guitarist, songwriter and producer Alan Duggan.

We begin by trying to pin down the album’s inception. “Well. It’s hard to say exactly when. It’s kind of written over the space of three years I’d say. After we put out the first record and we started touring we had to cancel a load of shows for health reasons. We came back to Dublin in October 2015 and myself and Daniel were like ‘let’s just go down to the space and just start writing anyway’ because you know, it’s incredibly depressing coming back to a grey Dublin & you’re like OK we have to stop everything. So we just went down and started writing”

A bleak time it may well have been, but not without its merits. Duggan cites the release of Kendrick Lamar’s seminal To Pimp A Butterfly as “an eye-opening record for having this general theme run throughout the whole thing. It made us start reassessing records that we already loved…Loveless does that too but in like much subtler ways.”

“Darragh doesn’t use any pronouns throughout the whole record. There are a good few tracks where he’s just making either breathing or vocal sounds.”

Bereft of a touring schedule, the band were able to pore their focus into the foundational motifs which would go on to become The Talkies. “We definitely knew we wanted to have some sort of cohesive element to the whole album. You know as opposed to just ‘let’s go in and write 40 songs and pick the best 10’.”

This reach toward cohesive elements would shape much of The Talkies assembly, though they came together gradually. “Let’s try to do something and then, slowly but surely that started to make more sense as to what it was…So a lot of the record is in A (a specific key – a term which donates a hierarchy of notes and chord changes in a given piece of music) and there’s like rhythmical things that kind of reappear and there are counts that reappear too.”

Formulating a specific theme or concept around singer Dara’s often impressionist lyrics might prove a little challenging, instead, the singer opted for a more top-down approach toward cohesion. Alan explains that “Darragh doesn’t use any pronouns throughout the whole record. There are a good few tracks where he’s just making either breathing or vocal sounds.”

The latter point should be highlighted. The Talkies opens with the subversive ‘Prolix’. A recurring rhythmic motif with Dara’s laboured breaths in lue of written vocals.

This could be described as a happy accident, though the adjective might not squarely sit. Alan walks us through the backstory. “With the breathing thing, the way that came about was in 2015 when we were back after the cancelled shows Darragh came down and he wasn’t in a great place but was kind of up for doing something.”

“We had worked on this ‘buh buh buh buh’ – that thing.. We had this whole rhythm track behind that which we end up getting rid of. But he was like ‘I’d really like to do something there but I’ve no idea’. I said oh maybe just try to breathe, just give that a go. He ended up having like a bit of a panic attack which is what’s actually recorded – so you know we just left it. When we came back to it we’re like ‘that could be a really strong opener for the record’. It’s not something you can really replicate. So that’s the actual audio recording from 2015.”

The Talkies underwent a disparate writing process. The band had cobbled together a few rough demos by the time they decided to take a hiatus in 2017 – including some time spent in a New York studio recording “loads of weird percussions and weird effects” into loops to use for transitional tracks.

Returning back after a year and change, the band found in their rough demos “definite jumping off points”. “When we start in 2018 we really kind of fleshed out those ideas and it started making a lot more sense as a record.. Rough demos just sound awful but you can kind of imagine what it’ll be like. It’s only really when you start getting everybody in the room that it actually starts making sense.”

It’s interesting to note that the tracklist didn’t really change all that much in the interim between hiatus and return. Duggan says of the group “We’re actually just not the kind of band that can have 40 tracks to choose from. The first album was similar as well.”

By the time the band came to Ballintubbert House in October/November 2018, the songs on The Talkies “were like 90% finished”.

Self-producing and mixing the album means headaches for everyone. “You kind of lose your mind a little bit when you’re mixing because you’re just listening to the same thing over and over and you’re like ‘I have no idea’…I think as a band we’ve got a lot better at knowing what we want and being able to express that. I mean there’s still a good bit of like ‘that needs to sound more yellow’ and he’s [Daniel] like ‘okay I know what that means’.”

Yellow aside, Duggan seems pleased with the finished product. He expresses the band’s gratefulness to label Rough Trade for sticking with them through their hiatus with a chuckle, “if we were on a major we would have one hundred per cent been dropped.”

Going forward, the band have booked a few shows, including two dates in Vicar Street for November 22nd & 23rd (tickets). Though, Duggan & Co. seem remiss to commit to the same sort of demanding schedule that, in part, fuelled the necessity for their hiatus.

“I think the kind of plan is to just do those shows and see how we get on. I think ultimately we really like touring. We just can’t tour that heavy, yeah. We’re just not the kind of band that can do that. So we’ll just kind of pick and choose shows we do. We will do a few shows next year. I don’t know where. I don’t know how many. I wouldn’t say a whole lot.”

It’s hard not to be delighted that Girl Band are back making and releasing music, touring schedule or not.

The Talkies is out on Friday September 27th on Rough Trade.