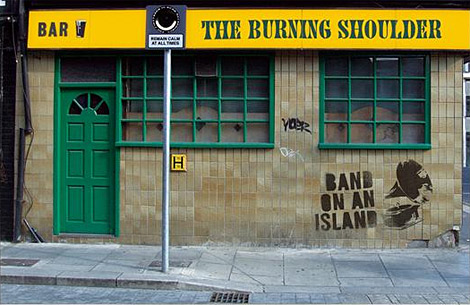 While talking to Bobby outside Jeffrey Lewis last week, the question of good Irish albums released this year came up. We cited Dry County, Super Extra Bonus Party, Delorentos, So Cow and Thinguma*jigsaw as examples of well-received Irish albums (as well as the forthcoming all-ready-well-received Cathy Davey album) yet as the Irish album poll I conducted here last year proved to me, it’s hard to pick 5 Irish albums you heard never mind albums you liked. It seems EPs are where it’s at this year. Excellent Irish EPs released so far include Adebisi Shank, Halves, Fight like Apes, Channel One with more to come from Jape and Terrordactyl. That’s why I’ll be adding an EP section to this years poll.

Another promising EP comes from Newbridge born-and-bred Band on an Island who released their Burning Shoulder EP last week. Good friends of mine, I’m delighted to see them enter the top 40 in the Irish charts this week as well as get airplay on Today FM and BBC Northern Ireland, so well done lads!

This is the lead track from the EP, “The Burning Shoulder”, a rousing rock ‘n’ roll tune with blaring guitar and underlying violin about a good night and a relationship gone wrong. The Burning Shoulder EP is out now on First Born is Dead recordings. You can get it in Tower and Road Records.

Band on an Island – The Burning Shoulder

[audio:http://www.nialler9.com/mp3/Band_on_an_Island_-_The_Burning_Shoulder.mp3] [ Band on an Island on myspace for gigs and stuff ]