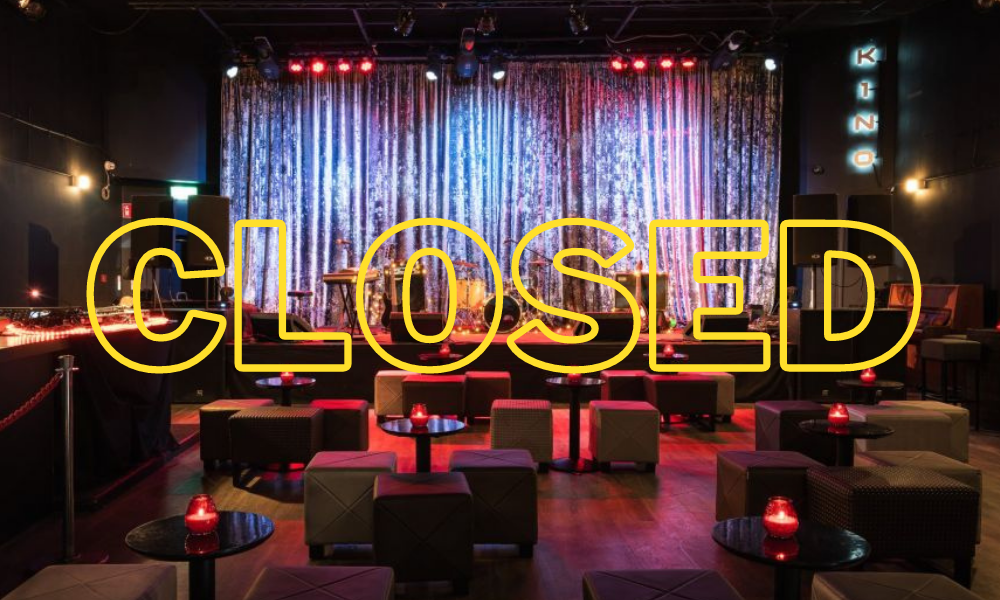 Ricky Powell, photographer associated with Beastie Boys passes away at 59

The Kino venue in Cork city has announced its closure amid uncertain pandemic restrictions that will affect venues abilities to open well into the year.

The Kino had only re-opened in September 2019 and was a smashing small venue, in a former cinema theatre space. We even did a Nialler9 Podcast there at the Cork Podcast Festival.

It’s the first venue casualty from the pandemic (that has let us know about its closure) and there are sure to be more into 2021.

The promoters, The Good Room, also look after It Takes A Village Festival, Live At St. Luke’s and the Cork Podcast Festival.

The promoter’s statement in full:

The Good Room has announced today that the Kino on Washington Street will not re-open. The promoters, who also run the Live At St. Luke’s concert series, took over the lease of the Kino in September 2019.

Unfortunately we’ve made the difficult decision to close the Kino for good. We had come to a new agreement with the landlord recently to stay until the end of the summer. But due to the latest government extension of level 5 restrictions we feel that it will likely be June or July before the live performance sector is allowed to re-open. It wasn’t feasible to continue paying substantial rent for the next several months in the hopes of maybe opening for a few weeks. Only to vacate shortly after in order for the building to be sold.

“It’s devastating to be leaving so much sooner that we had hoped but unfortunately the timing never worked for us in the Kino. We were only six months into what was a five year plan when Covid came along and we were forced to close last March.” – Joe Kelly

“In truth we had just found our groove and the venue was getting a great name nationally. We never got a chance to fully realise our vision for the Kino. Had Covid not come along we would be in a completely different situation.” – Ed O’Leary

“We’d like to thank our landlord, Philip O’Connor for his support and understanding all the way through. There was good communication between us and we all had to make compromises due to Covid. He was fair and wanted us to do well in the venue. It was a hard year for everyone but communication was key to making it work. We’re happy that we leave on good terms and wish him all the best in the sale of the building.

We’re extremely proud of all the great gigs and events we put on during our tenure. So many brilliant acts, both Irish and international performed there in the eight months we were actually open. There was real heart and genuine effort from our staff, crew and all the artists, we want to thank all of them for that. It made the venue the special space that it was. Everyone was sound and great at their job!” – Joe Kelly

“We lost a lot, but learned so much from the experience and genuinely loved every minute we had there. Everything we’ve learned from the Kino will all be put into practise in the next incarnation. We are exploring a couple of options in the city at the moment and hope to have a new venue for Cork before then end of the year.

The live performance industry as a whole is in tatters and everyone from promoters to sound engineers and all along the supply chain are hanging on by a thread. Supports like the Live Performance Support Scheme are the only thing keeping some of these businesses alive and these need to be continued and added to for 2021 and 2022 or there will be a lot more bad news like this coming.” – Ed O’Leary

“We hope to be back with Live At St. Luke’s concerts in the autumn and as soon as we can get back to live events we have some incredible stuff lined up. We’ll be hitting the ground running and know that we will only go from strength to strength once things open up again.” – Joe Kelly

The remainder of our Kaught At The Kino online shows as part of the LPSS will be streamed on The Good Room Facebook page and YouTube channel in the coming weeks.

Tickets for rescheduled shows that were due to take place in the Kino will be refunded and others are being moved to Live At St. Luke’s. All ticket holders have now been contacted.

If you have not received an email please use www.kinocork.com to get in touch.

“Thanks to every audience member and customer who has supported us during our sporadic year and a half in the Kino. There were some great nights and some lovely crowds. We look forward to seeing you all again, hopefully in the not so distant future.” – Ed O’Leary

Some of the acts to play the Kino during the eight months that we were open include:

13 new songs from Irish artists you should hear this week

Ricky Powell, photographer associated with Beastie Boys passes away at 59