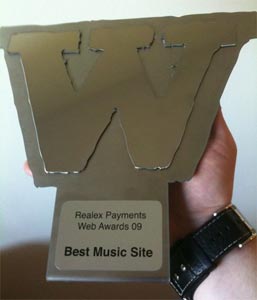 Before normal service resumes, a little bit of housekeeping..

Nialler9 won the Best Music Site at the Irish Web Awards 2009 on Saturday! Thanks to all who were involved be it in voting, judging, organising the thing (Mr. Mulley, Rick and co.) It’s the best goddamn web awards going. Sure where else would you get bags of crisps and rude t-shirts thrown into the audience? Great stuff. Full ist of winners here.

This weekend sees Hard Working Class Heroes kick off again and there are a number of things I’m involved in worthy of your time. As well as participating in the speed sessions in The Button Factory on Saturday from 10.30am – 1pm along with the people listed on the left here, there will be an interesting panels taking place in the same venue at 2pm. Media – Why The First, Last And Middle Words Are Online will take a look at the impact of online music coverage from MP3 blogs to music sites and how these websites affect bands. Chaired by Jim Carroll, the panel will consist of myself, Sean Adams (Drowned in Sound – the UK’s premier indie music site?), Anthony Volodkin (creator of The Hype Machine – seriously interesting dude), James Foley of the online music industry newsletter Record of The Day and Una Mullally (Unarocks, Sunday Tribune, Soundcheck) It’s a great mix of people so try and make it along if you can. (Free entry for anyone with a valid day / weekend wristband). More panels here.

Also later on that night at 8.30pm in The Twisted Pepper, myself and Una will be joining Jim once again for the 4th Banter discussion “Meet the new media cats” which will see us poking around in the Venn diagram between blogs, Twitter and the established media. Admission is FREE but please register your interest as capacity is limited. We’ll both be DJing in between the acts on the night in the venue there for HWCH. Playing in the venue are: Valerie Francis, Hunter-Gatherer, The Spook Of The Thirteenth Lock, Cities, Kyon, Yes Cadets, The Dying Seconds and The Holy Roman Army.

Finally, next week, I’ll be hitting CMJ in New York so expect some bits and pieces on that then.

The Power of MAP