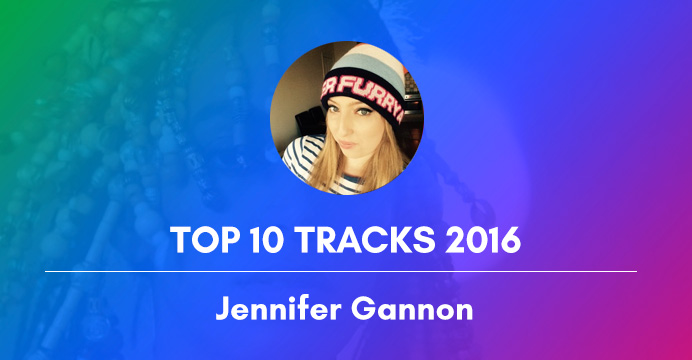 Jennifer Gannon is a pop culture and music writer. She is one half of the ’80s/early ’90s-tastic club night Lime & Fancy, which happens Friday in Wigwam and is free in.

Niki & the Dove – So Much It Hurts

Due to this year being a monumental shit storm I mostly took refuge in the glory of the sad-banger. Never have we needed to dance it out to deeply upsetting songs to make sense of the universe or to attempt to momentarily forget the damp sadness that manages to purvey the soul. Also, with every mewling bloke wielding an acoustic guitar willingly trying to destroy the sad banger in its purest form, we need to stockpile as many as we can. It’s a pop state of emergency.

In the Venn Diagram of Pop this track would be where Prince intersects with Fleetwood Mac. Not only does it namecheck Thieves in the Temple but the irresistible chiming keyboards and outrageous bassline are straight out of the Funky One’s bag of tricks, the lyrics though are pure Stevie Nicks. The cold disappointment, the searing rejection woven through the verses (dancing alone, the specific torture of the silent phone) before the giant, soaring chorus hits and it becomes a bizarrely life-affirming singalong, a howl of frustration about complete desperation with extra added handclaps.

Shura – What’s It Gonna Be?

2016 was most definitely the year of Shura. Her Mam endorsed album Nothing’s Real worked its way into every pop kids heart with its special brand of electro melancholy , a shyly told wonder about navigating heartache and repairing yourself with the help of friends. In an ideal world What’s It Gonna Be? would have been sitting at the top of the charts for a month. It evokes all the best ,glittery pop feelings, It’s the fizzy bang of a burst balloon in the Top of the Pops studio in 1987, it’s the first ice-cream in the sunshine, the scent of Hubba Bubba on a Saturday morning.

It could be the greatest song Carly Rae Jepsen hasn’t sung (yet) With its whizzy production and Boys of Summer-style guitar plucking, it could have easily been inserted in the San Junipero soundtrack. All keytars and drum machines and a chorus that demands intense shoulder shrugging slo-mo dancing or triumphant fist-pumping depending on the crowd.

All Saints – One Strike

Grown up pop at its finest. We may have all been stunned by Beyonce’s bitter brew of Lemonade this year but Shaznay Lewis was serving up a complex cocktail of her own,mixing her bandmate Nicole Appleton’s heartbreak into one long cold glass of truth. One Strike is a shattering tear-stained diary entry, a series of choked up late night phone calls, a song exploring the after effects of the emotional earthquake of infidelity. The Red Flag album is not just a soak in the deep waters of misplaced desire and sorrow it’s also a hymn to the hope and strength to be found in female friendships, from the stunning , loops and beats of Tribal to the underrated pop anthem One Woman Man it’s the soulful, sexy sound of self help.

To yearn is sometimes divine especially if it sounds as good as this. The centre of When You’re Lonely is a metallic whir that echoes the repetitive thrum of traffic that shudders through thin bedsit walls before it builds to the crescendo of a chorus that sounds like a shimmer of hope but is in fact the sour note of resignation, condemned to a life of longing.
This is the certain type of commonplace romantic loneliness keenly felt on the bus home as the windows fog up and another day dissolves into the tarmac. The spaces where it shouldn’t be, the harsh fluorescent lighting of the supermarket, spotlighting tired faces in the reflection of the full length freezer. An inner city claustrophobia, searching for the ultimate freedom of the dance-floor in the same vein as Robyn, Everything But the Girl, The XX, an ice-cold beauty that splinters the soul.

Every great moment I had this summer was soundtracked by this song. It was also punctuated by me accidentally punching someone in the face out of pure over excitement. It was singing all the wrong words in kitchens at crazy o’clock, on dancefloors with strangers, slaying in Croke Park. Every sweaty face bellowed for ladies to get in formation, not to put a ring on it but to get real and get fucking militant. This year needed a superhero and we got Beyonce in her imperial phase, ready to stomp right over the useless and kick the truth in a truly thrilling way that we had never seen her do before. A ferocious, vibrant celebration of every single nasty woman out there who causes all this conversation.

Jessy Lanza – It Means I Love You

This is all about elements, pop chemistry, attempting to figure out what it is that makes it completely addictive and failing miserably to capture its unique brilliance even when you’ve listened to it thousands of times. There are moments when she sounds like Paula Abdul relocated to a Brooklyn warehouse party, there are parts where she seems like a cool-girl character Kristen Wiig might have lampooned on Saturday Night Live and then there are bits where it’s as if the ghost of Aaliyah was haunting a hiccupping car-alarm. All of it melted together make this a stuttery, Timbaland style-sizzler.

Why can’t all other football songs sound like Yellow Magic Orchestra flying on a psych trip into the arms of Damo Suzuki? After a seven year hiatus the Furries gifted us with this cheery wave of tune that may have been the unofficial song celebrating Wales qualifying for the Euros but it actually ended up being their very own spacey version of Tour De France and the official song of my summer. Seeing them sign off with this at Electric Picnic to a packed tent and surrounded by old Furries friends was definitely one of my moments of the year.

Wake up Mister West indeed, we don’t know what Kanye we’re gonna get from day to day at the moment. Thinking back to the Kanye/Taylor controversy now seems like more simpler times, quaint halcyon days when we worried about who was gonna come out better in this bout of bitchiness and reeled at THE SHADE of Kim’s snake emoji tweet. ‘Famous’ now acts like a weird tiny three minute time capsule when it was only Yeezy’s ‘art’ and video making skills that were called into question.
It’s Kanye gone pop (not yet, not literally) it’s big, silly, bombastic and completely infectious. When you kick off a track with Rihanna cutting up ‘Do What You Gotta Do’ throw in a chorus that’s a massive sample of Sister Nancy’s endless jam ‘Bam Bam’ and end it with Nina Simone it has to be one of the songs of the year.

Solange – Cranes in the Sky

This year was a bit noisy, a bit extra, a bit too fucking much with everyone gurning right up into your face demanding attention, wanting to burrow their way into the tiny bit of space left in your mind. Thankfully there were still moments of subtlety to cherish.
Cranes in the Sky was like exhaling, it came at the time of year where you can see your breath hanging in front of you, an internal truth released. Solange pushed the personal truth out, the track an exhausted roll call listing every futile attempt to erase the painful past. It’s a fragile, delicate piece floated on silky strings like a thousand tiny paper cuts slicing up your emotions with its devastating simplicity. A light, soulful meditation about the aching to find some serenity, the origami of the broken heart attempting to reassemble, to take flight, ready to be set free.

Hope Sandoval’s vocals always sound halfway between wine-drunk catatonic and on the verge of tears which is possibly the perfect state to listen to this track. It’s a stark, paranoid slab of Massive Attack bleakness that’s wrapped around her feline purr which was used so effectively on Paradise Circus. The Spoils is almost its shy sister, a chiming electro charmer that unwinds on sinister strings with its hypnotic chorus almost becoming a mantra about the trap of a disastrously obsessional relationship.