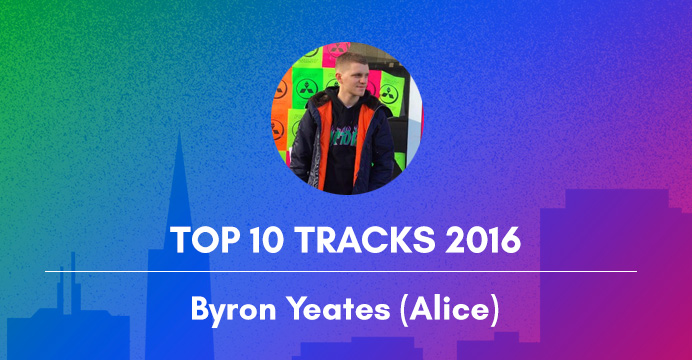 Byron Yeates is a Galway-based DJ with Alice. As a DJ he plays house, techno, acid, disco and Italo among others. Check his Soundcloud for mixes. This past weekend, he made his debut at Panorama Bar in Berghain, Berlin.

DJ Overdose and Cliff Lothar teaming up on this one to create one of my top tracks of the year. The synth/acid/electro/house hybrid sound which reminds me of summer, playing while the sun goes down.

Played in probably every one of my sets this year since its release. The Mike Servito remix seems to have gotten all the attention but I wayyyy prefer this version with the camp vocal sample and it’s kind of fun rippling sound.

The 707, the strings and the big cheesy trumpet. It works and it feels goooood!

Marie Davidson – Naive To The Bone

The spoken-word style vocal over those beats, I fell in love with this track the second I heard it, initially thinking it was old until I heard the “It’s 2016, get real lyric”.

Feel good house music that reminds me of long summer days on Inis Oirr. Production in particular on this incredible and the dub version hasn’t left my bag in a while.

Cheating with this one, but it had been on my Wantlist for FOREVER and got repressed this year. It encompasses so many of the things I love in an old record, with that proto-house sound.

Again, so many sounds I love in a record wrapped up in one. Always gets the party going when those freestyle synths kick in.

Super fun party track. The title pretty much sums the record up. I always love seeing people’s reaction as they hear it for the first time.

A weird, tingly, infectious track that really resonates through you.