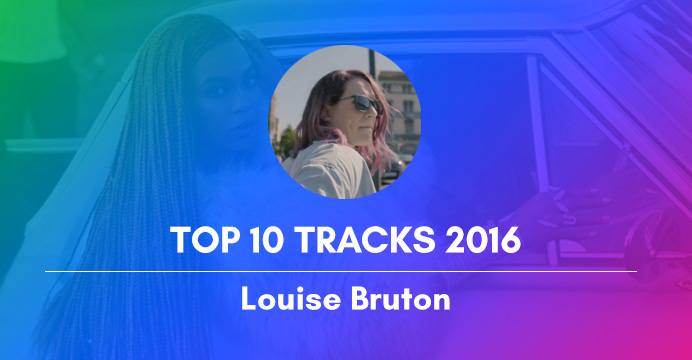 Louise Bruton is a freelance journalist, pop culture enthusiast, lone wolf and party ledgebag. She loves Craig David and getting famous people on her knee. She combined both of those things just this week. She also runs Legless In Dublin which reviews Dublin places in terms of wheelchair accessibility.

Aul Kanye gets a hard time but this song with dirty disco vibes and a bounce so smooth, your shoulders develop a rhythm of their own. The Life of Pablo is full of songs that give us insights into an unhappy life (No More Parties in LA, Real Friends) but Fade is a filthy club hit with dark undertones.

I was at a party full of Irish people in London when Formation dropped and we ended up pausing all other playlists and had the song on repeat for the rest of the night. Its combination of pop culture and political statements make it one of Beyoncé’s most powerful songs, adding to the resurgence of protest music for the masses.

When mopey Drake is kicked to the curb, we get dance delicacies like One Dance. This, for me, will forever be the sound of summer 2016. Even when I’m old and weary, the first few strains of this will take me back to dancing at a chip van in the wee hours of the morning at music festival, refusing to go to bed.

All Saints – One Strike

Now, this is a comeback. Influenced by Nicole Appleton’s divorce from Noel Gallagher, One Strike is an understated break up song about defiance that throws All Saints right back to that realm of cool that they specialised in in the late 90s and early 00s.

With its shrilling electric guitar riff and durrty R&B groove, Kiss It Better strikes me as the type of song that Lenny Kravitz wish he wrote. This song evokes wind machines, silk shirts and impractical sex scenes normally displayed in movies like Top Gun.

Not since Mousse T. has a song had so much horn. The collaboration between Run the Jewels and DJ Shadow is instantly recognisable and with lyrics that portray the worst of humanity, it’s an anthem for this trainwreck of a year that we’ve all managed to survive.

Ariana Grande – Into You

Although many pop fans were hesitant to accept another pop diva in our lives, Ariana came along with this song and we apologised for ever doubting her. With flirtatious lyrics and a throbbing beat, the dance floor becomes a very dangerous place when Into You starts to play.

NAO was the breath of fresh air that the pop scene needed this year and Inhale/Exhale is a smooth and swirling R&B treat that melts in your mouth.

Tove Lo is the bold outlaw of the pop world, writing songs that celebrate our shameful moments instead of hiding them. Cool Girl trips over itself and the words roll into each other, making it an effortless ditty that challenges the power play in relationships.

Jesus Christ. The first time I heard this, I felt like I had been reborn. Put ‘Em Under Pressure should be Ireland’s national anthem but this version gets the blood pumping and it awakens a tribal roar that you never knew you could muster. Paired with the national pride we had during the Irish fans’ triumph at the Euros this year, this was an attack of the emotions.