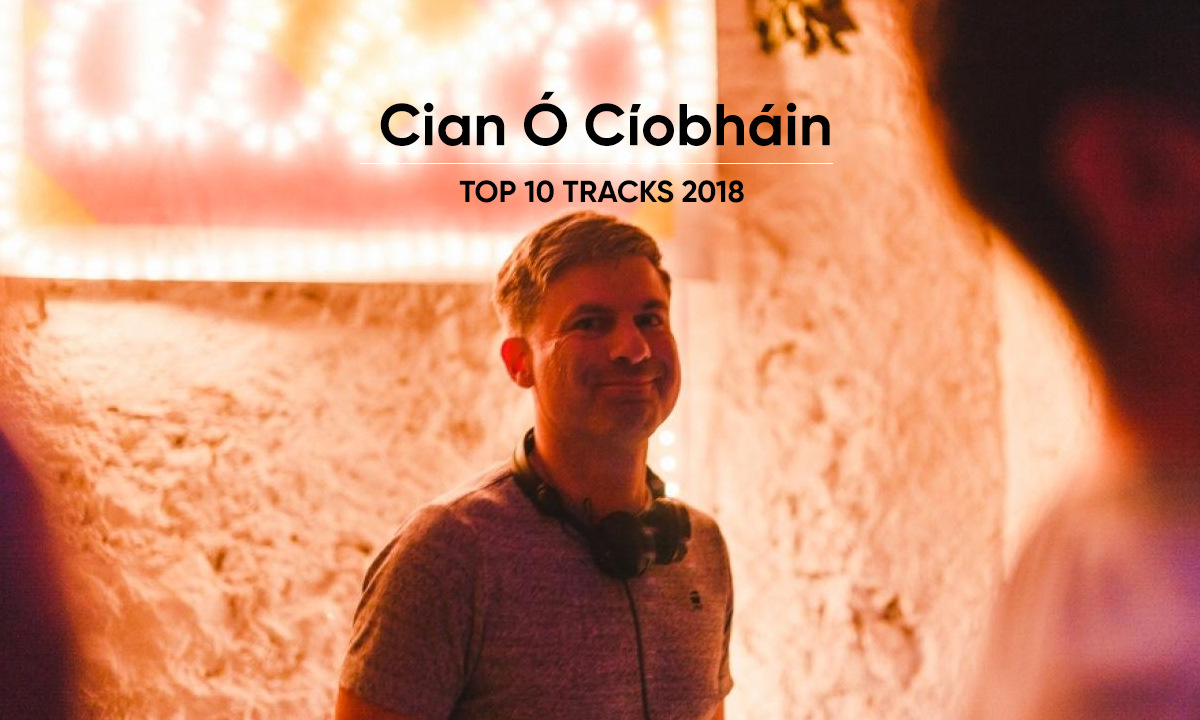 Cian Ó Cíobháin is a west Kerry DJ and radio presenter with Raidio Na Gaeltachta. Now based in Galway, the selector took time out of his schedule to fill us in on his favourite tracks on 2018.

Speaking on his choices for the list, Cian said “The prospect of compiling a top ten based on all the music that I heard from around the world this year seemed hugely daunting, so I narrowed it down to only Irish artists instead.”

I believe that this one has been doing the rounds in clubs for a couple of years, when Tr One featured both Eddie Reynolds and Dean Feeney (Tr One is now just Eddie, who’s been on a roll all year with so many quality releases) until it was finally released this year by Apartment Records. In a parallel universe, it would be considered the perfect summer anthem. A track bristling with anticipation and unless you were already aware of the title, the introduction gives no particular indication of where this one might lead you. Close to three minutes in, the first warm flutters emerge: yes, of this there is no doubt, this is a track oozing with the heady intoxication of the heart of summer.

Yawning Chasm – Oh I Do I Know

Quite simply, one of the most gorgeous songs I heard all year. From Galway’s Aaron Coyne’s latest album Songs From A Blue House on Rusted Rail. It reminds me of Sufjan Steven’s acoustic work, Stephen Merritt’s love songs (without the irony), Elliott Smith and – at times – brings to mind the spirit of certain poignant songs from the past from Galway’s own Cane 141 or Kilkenny’s Engine Alley (had these bands ever ‘gone acoustic’). While I’m on the subject of Rusted Rail, the recent LP from label supergroup Cubs also deserves your investigation.

Produced by two young men from Galway – Brian McNamara and Simon O’Toole – who like many others, are finding it increasingly difficult to eke out a living as the cost of living spirals in Dublin. This particular topic, as well as other social issues are highlighted on their Vandalise The Donut Shops EP on Goldbrick. I found myself playing this track on my radio show quite a bit over the summer months and after repeated exposure – all of a sudden, one balmy damp evening in Connemara – discovered that I had completely fallen head over heels with this gorgeous, lush number.

I could highlight almost any track on any of the two EPs released by the Kilkenny-based Moot Tapes label, but this low-slung number touched by the spectre of post-punk and industrial records of yore, from the imagination of Sunday Times’ John Hennessy is brilliantly executed and quite understated in it’s brilliance.

Derry-based Eoin O Callaghan has been wowing these ears with his compositions under his Elma Orkestra moniker over the past two years, but I think that this track might just be his best work yet. It came about when he was commissioned by Ulster Architectural Heritage to write a piece about a building that was important to him and he set out to compose a track based on the shirt factories in Derry, in particular with regard to the ladies who worked in them. This track features the voice of Maggie McIntyre, recorded in 1978, when she was in her seventies and the track also samples a sewing machine which is used as percussion. Rather than farther reveal the creative process behind it, l beseech you to check it out for yourself.

A timeless electro track from Dublin’s Matt Flanagan on Earwiggle, I found myself playing this loads on the radio and at gigs this year. It’s a flawless piece of work that people instantly warm to on the dancefloor. Actually, the whole Battery Blast EP from whence it is plucked is brilliant and I also loved the bangers he created with Sunil Sharpe under their Tinfoil moniker this year. But, when push came to shove, this was the one that I constantly found myself returning to.

As soon as I heard Colt, Hilary Woods’s debut LP I immediately thought: how much would David Lynch appreciate this? This is my favourite track on the album – I love the way her voice hangs over the yearning, dreamy guitar line (like some kind of sadcore riff on ‘Wicked Games’ by Chris Isaak). The record came out on New York’s impeccable Sacred Bones label which is practically all the endorsement you might need to go seek.

What a tour-de-force this one is from the fourth and – currently – latest EP from Dublin quintet Fontaines DC. The intro brings to mind the guitar play of Daydream Era Sonic Youth. Soon we find ourselves hurtling along at a lightning pace akin to the force of early Therapy? records, before the vocals kicks in: frontman Grian Chatten embracing what Tony Clayton-Lea describes as a ‘potent Dublin state of mind that few of their contemporaries have or care to deploy’, yes, all this over a bassline that might have been conjured up by Kim Deal. I’m making loads of lofty and potentially unnecessary comparisons here, but don’t mind me, check it out for yourself:
‘Is it too real for ya?’

One of Ireland’s brightest and most consistently enduring talents, no matter what style of music Kitt turns his hand to, this song which is based in my adopted city was a track that I listened to pretty much every week since I first heard it. It’s nothing short of perfect. Check out his brother’s R Kitt’s offerings from 2018 too, I took a particular shine to ‘Oíche Mhaith’.

Landless – The Trees They Grow Tall

Landless are a traditional vocal group from Dublin and Belfast who sing unaccompanied traditional songs from this island, but also England, Scotland and the US. They specialise in four-part harmonies and their songs touch on all the big themes – love, death, work, grief. John ‘Spud’ Murphy who has worked with Lankum and Katie Kim, recorded the songs on their debut album across some of Ireland’s most reverb-heavy churches and – relying solely on the natural ambience of these spaces for accompaniment – has managed to conjure up the ghost of a young Ivo Watts-Russell dancing on the Hill of Tara.