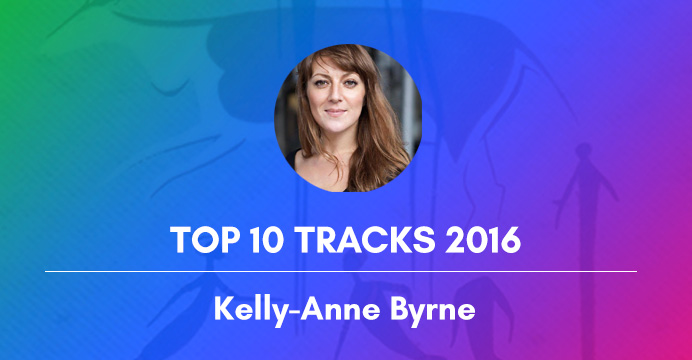 Kelly-Anne Byrne is a regular DJ at festivals throughout Ireland. She’s known for her love of disco and soul, which manifests itself in a monthly club night called Burnin’ Up in The Grand Social and a nationwide show on Saturday and Sunday night on Today FM called The Beat Goes On.

The Beat Goes On Christmas Party happens this Friday night in The Sugar Club.

This record blew my mind the first time I heard it, it sounds exactly like something from the 70’s, something I’d expect DJ Harvey to play- Koze’s production is unreal. I think I played it about 20 times in a row when I was first sent it. Lapsley has a beautiful voice, even though it’s about rejection, it has such an upbeat tone & the lyrics are so quirky.

I picked this up back in the summer & played it at a number of festivals, it’s different to the other stuff that Faze Action have done (although I like almost everything they do), more of an afro-beat feel, in many ways it reminds me of a William Onyeabor track and I love William Onyeabor.

Anderson Paak – Am I Wrong?

Malibu is one of the best albums of 2016 for me, Anderson Paak is like Q Tip meets Marvin Gaye, there are so many layers to the album & this is my favourite track on it, you can’t help but groove to it.

This is a stunning, soulful record by Dublin-based singer Emma Garnett, aka Feather. I love this track because it takes you on a journey, ending in a completely different place to where it started. I happened to be djing at a wedding during the summer for two people who listen to my show, Feather sang their first dance song, ‘At Last’ by Etta James, she has an amazing voice & I hope to hear a lot more from her.

Taken from the brilliant album Light Upon The Lake, this track by Whitney really warms my heart. I remember reading an article with Damon Albarn in which he spoke about the power of the perfect pop song, mainly those written in the 60’s by The Beatles, The Kinks, The Beach Boys etc, the magic of those songs was their simplicity, sincerity & subtlety, that’s what this track is like for me.

There’s something about this song that really moves me, it’s like it has a heartbeat. The album The Triad is one of my favourite albums of 2016, when I put it on I drift away. I saw Pantha Du Prince at Primavera & Electric Picnic this year, both shows were excellent.

This is my favourite Irish song of 2016, the guitar just grabs you from the start and what a voice, some of the lyrics are quite melancholic but I still find it hopeful, maybe it’s the ‘sha la la’ throughout.

I don’t know if there’s a finer record this year than Solange’s A Seat At The Table, in many ways it reminds me of Lauryn Hill’s The Miseducation Of Lauryn Hill or Marvin Gaye’s What Going On in its subject matter. I get a lump in my throat every time I listen to this. I love the words and her voice is so soft but really what’s a magical about this record is how gentle it is, even though its subject matter is anger, that’s what makes it powerful.

Lauer is one of my favourite producers of now, I love almost everything he does. I’ve been playing this out a lot lately, always get a great reaction, it’s like Depeche Mode meets Inner City.

Leonard Cohen – You Want It Darker

This track is so haunting, as ever with Leonard Cohen, I was hooked on the words when I first listened to it. What a way to leave the world, by giving us this incredible album and this song, which ironically throughout, says ‘I’m ready my Lord’.