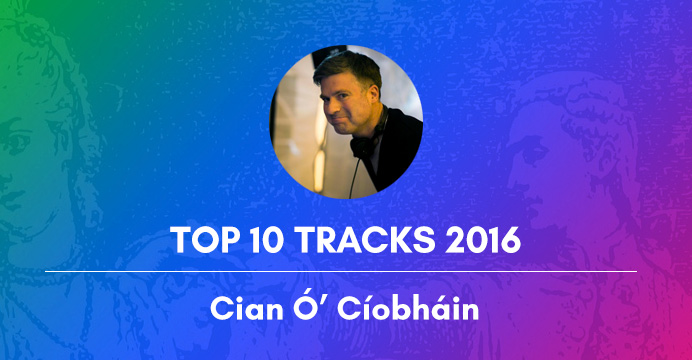 Cian Ó Cíobháin is the presenter of An Taobh Tuathail five nights a week on Radio Na Gaeltachta, he’s a DJ for 110th Street in Galway and for hire as a wedding DJ too (read my recent interview with him last year). He’s an excellent selector (but he just couldn’t limit himself to 10 this year)

Last summer, Cork-based Ellen King sent me seven of her most recent compositions, four of which are just about to drop on her ‘Romance EP’ on Art For Blind. Every single one of these tracks sent ripples through my life. I have no idea how many hours she has spent in the studio honing her craft, but to hear such carefully crafted & emotive outsider techno already sounding so perfectly formed has established her as one of the era’s most enthralling artists. The meticulous attention to detail in her sound design evokes Laurel Halo or Actress on top of their game. She’s already that good.

I know it’s impossible for even the most dedicated music lover to keep on top of listening to all the new releases, but when conversations regarding ‘album of the year’ came up at Other Voices in Dingle recently, I was aghast that nobody seemed to have heard of ‘Interior Memory’, the latest album from Dublin-based Rollers/Sparkers, a band who seem to be happily existing completely off the grid. I’m not sure how accurate this description is, but when prompted in Dingle, I speculated that the music sounded as if the band had spent their life locked in a room with no sensory stimulation, bar ‘The Wicker Man’ movie, post-punk’s broodiest records & the entire Can back catalogue. This is possibly the most immediately accessible track on what I should hope will come to be regarded as one of the all-time classic albums.

Italian girl-boy duo followed up their first ever two releases on Optimo Trax some months back (firstly a split EP with Muslimgauze, followed by a solo EP) with an extraordinary album at the tail-end of 2016. ‘Invito Alla Danza’ is one of my albums of the year. Loosely playing with house/techno forms, they also draw from other sources, most notably on the breakdown of this track: where hope-springs-eternal ambient textures from the dawn of the first summer of love mingle with ethnic vocal samples from sun-baked deserts, sounds that are magically manipulated into a track that should bring a thrilling sense of mystique to the most dead-eyed dancefloors. Oh, and just listen to those drums!

Bjarki R.Sigurdarson hails from Iceland, but is based in Copenhagen, where he’s been forging a treasure-trove of incredible tunes over the years, many of which have been picked up by Nina Kraviz’ Trip Recordings label (he released three LPs this year). Aphex Twin is the first obvious reference point when it comes to listening to his music: most notably in the song titles (a hodge-podge amalgam of digital media-speak, eastern European cold-call phone numbers & incorrectly spelt words), but also in the way he effortlessly fuses beautiful melodies to jackhammer beats. His take on techno sounds a tad more streamlined that Richard D James’ break-core demolitions but is also more attuned to how to work a dancefloor. This sounds like the kind of record you might embrace at a rave of at the end of a long Arctic winter, just as the first rays of sun return to the outer peripheries of the northern hemisphere.

So two precocious, teenage girls from Norwich somehow managed to write one of the pop songs of the year. It’s rare that such a complex pop song managed to sound so nonchalantly breezy. The slowly unfurling neo-psychedelic intro, which gives very little hint of what’s to follow, evokes the mechanisms of The Boo Radleys’ classic ‘Lazarus’ . When the kick-drum and vocals eventually drop, you would be forgiven for thinking you were dancing to a young Kate Bush in the first giddy throes of passion with the sounds of woozy folk and Balearic disco. They even manage to pull off a cheeky rap with aplomb. This is a record teeming with the confidence of youth. I would give anything to find out what records these ladies have grown up listening to.

Andy Stott – Too Many Voices

Ever since his low-slung, slow-techno days, every new record by Manchester producer Andy Stott has been received with particular gusto in this household. This is the title track (and the stand-out song) of his latest essential long-player and effortlessly sits Alison Sidemore’s vocals (redolent of ‘Hounds Of Love’ era Kate Bush or Bjork) astride a New Age backdrop, a potent reminder that we should perhaps find time to revist Enya’s old records with fresh ears.

February & Mars – Secret Storm At The Edge Of Night

I’m bending the rules slightly with this one as it was released at the tail end of 2015 on German label Mojuba Records, but I only became aware of it earlier in the year, in spite of the record being made here in Galway, where I live, by Jack Considine and Carl Rumberg and produced by John Daly. The production brings to mind Tusk-era Fleetwood Mac, but it’s the vintage synths that lends the record a timeless feel. The song-writing and arrangement is faultless and once you’ve fallen under this song’s spell, you’ll wonder how you ever survived without it.

* Honourable mention: Seti The First – The Wolves Of Summerland

The Not Not Fun label, based in California, have been on the money all year. Umberto, Delicate Features and Ssaliva all released wonderful LPs on NNF this year, but the stand-out release for me came was an album called TTNIK from Laura Hill, Brisbane’s “dehydrated disco” queen, who records as Scraps. This breathless slice of lo-fi, sun-bleached synth-pop recorded in her home studio – think: John Maus or John Foxx producing The Go-Betweens – has stopped me in my tracks more often than most songs released in 2016.

Floorplan – Tell You No Lie

This was easily the biggest track for me when DJ-ing this year, whether in clubs, festivals or – no word of a lie – even certain weddings. Robert Hood lifted his vocal sample from a 1977 disco record, Brainstorm’s ‘Lovin’ Is Really My Game’ and scattered his magic glitter all over it, until lo & behold, we had yet another joyous Floorplan techno/disco anthem that brought so much cheer to dancefloors this year. Then, cool as you like, like most of my favourite artists, he didn’t even bother to include it on the final tracklist of Floorplan’s 2016 LP ‘Victorious’, which also hoards an indecent arsenal of disco bombs.

Aphex Twin’s most recent work may not have been received with the same fanfare as his trailblazing work of yore, but I’ve been bewitched by some of his most recent output and this cut from the ‘Cheetah’ EP is one of my tunes of the year. That insidious, mournful riff that asserts itself half-way through the tracks wormed itself into my dreams this year. Listen carefully. Then have a nap.