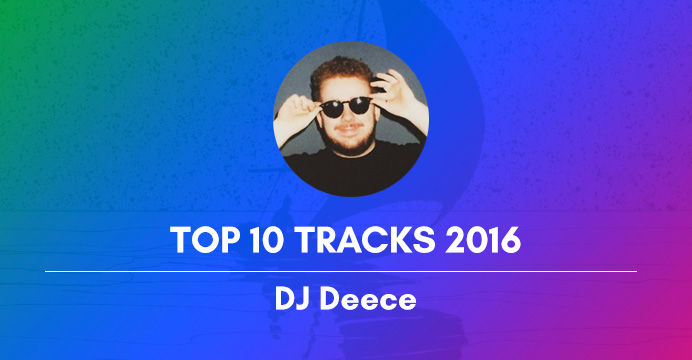 Niall D’Arcy aka Dj Deece is a Kildare man, a resident at Somewhere Club? on Wednesday nights  and a resident Hidden Agenda – watch out for his Deece Series. He has lot of gigs this month.

I know I said in no particular order, but this is my #1 track of this year. Midland’s label “Regraded” is all of my favourite things – raw house beats, disco samples, and big vocals! A massive tune at festivals worldwide this year, and will be for years to come. He uses the sample so well. How he heard the original, and thought to make this, I’ll never know. Amazing!

I probably won’t be the only one to name this in their top 10 of the year. An infectious piece of funk from one of the best albums of the year. This one has been getting played whenever I get the opportunity, and never fails to get people feeling good.

Slightly cheating with this one [yup], as it originally came out in ’93, but it got a repress this year with some nice remixes on a label called Misfit Melodies, and I’ve been playing it quite a lot. It has everything a good classic house track needs – super catchy bassline and a killer piano riff. Move D is the man!

The biggest club tune of the year in my opinion. From the first kick drum to the last, this tune gets you hooked. Killer acid bassline, very well sampled vocal, and plenty of claps. Perfect. Traumprinz/Prince of Denmark has built up this mental cult following, and it’s easy too see why, with belters like this.

The man can do no wrong. Imagine being able to release an album of tracks that didn’t cut it for the album, but they’re better than what most other artists are coming out with. This is the standout track from that “Untitled Unmastered.” record for me. Funky, soulful, and full of energy. One of the best rap tracks of the last few years I reckon.

From the brilliant MLIU 2016 compilation by Jeremy Underground, this is as simple as it gets, but it bangs so hard. When house tracks are this simple, it’s the sequencing and small little frills that make them stand out like this one does. It helps to have a catchy piano riff too, but I feel like it would be unfair to single the track out for just that. Can see this one being a classic for years to come!

By all accounts this has been one of the most popular tracks at Panorama Bar since DJs got their hands on it. It’s easy to see why. It builds very nicely, with a thumping beat and a few little bleeps every now and again to hold the interest. Then a slick female vocal comes in, and the euphoria commences. Massive, massive tune with serious drive from start to finish. Great use of minimal techniques.

John Talabot is the man. Didn’t know this was him until Gav (Adultrock) mentioned it to me, but it explained a lot when I found out. Similar to the Bwana track, this one relies on a big driving beat, backed up by little synth notes and other frills helping to build the track to euphoria. As the synth builds you can just sense the energy in the room building. If I was doing a top 10 breakdowns of 2016, the breakdown in this tune would win hands down. So, so good. Even though it comes in around the 10 minute mark, I rarely find myself mixing out of this one early.

Chaos In The CBD – Midnight In Peckham

Pure bliss. I looooove dance tracks that can work as well at 2am as they do at 10pm, and this is one of them. I recently had the boys over to play The Deece Series, and they absolutely killed it. Their stuff is all killer, no filler. This is the smoothest house joint of year, and a tune I could listen to on repeat for hours.

Drums, guitars, flutes, trumpets, sax, piano – this track has it all without sounding a complete mess, which is tough. This is probably the tune that came out this year that I most wish I’d produced. Had to try very hard, and be patient to get my hands on the record but I eventually got it. Another one that from start has your undivided attention, and then keeps it for a good 9 minutes. Always the sign of a great tracks when it feels way shorter than it is. Magic stuff from Glenn underground.

One of the most beautiful and interesting pieces of music I’ve heard all year. Hypnotic, pulsating and Irish, which always helps. Really gorgeous stuff.