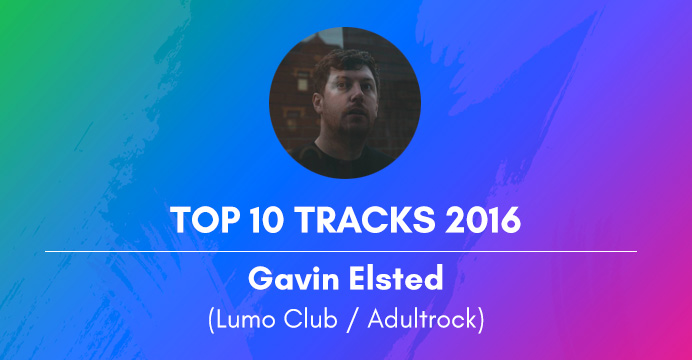 Gavin Elsted is one of the three resident DJs at Lumo Club (alongside myself and Simon Roche), the monthly night which celebrated being a a year-old in Yamamori Tengu in Dublin in October, a year in which we also took the club ethos to Body & Soul, Metropolis, Forbidden Fruit and most recently, Dingle this weekend.

Gavin is also the producer known as Adultrock, who released the fine Push & Pull EP this year.

The next Lumo is Thursday December 22nd – our Christmas party. Tickets here.

From one of my favourite albums this year. I had seen the name knocking about for a while and one of the online retailers like Phonica or Juno had posted this tune and I was hooked. Subtle, minimal instrumentation but a lot of emotional power in this track.

One of two tracks featuring Empress Of on my list. Pional’s productions are always very special and this is no different – equally at home on mainstream radio as it would be in the club.

I think I’ve played this at nearly every Lumo since I got my hands on it. A muscular modular workout from John Talabot under a pseudonym, this never fails to get bodies moving. The best bit is when it cuts to just the beat and the bassline – you can hear the tops off from a mile away.

I am fond of the occasional bit of maximalism and this definitely ticks the hyper hyper box for me. Very close to something off Rustie’s Glass Swords but more hook-laden and a bit more direct.

A beat, a bassline and vocals. That’s all this is and yet it manages to be as engaging as anything else you’re likely to hear. If this is what the full-length that this is from is going to sound like, I can’t wait to hear it.

Empress Of – ‘Woman is a Word’

My favourite pop song of 2016, hands down. Must have listened to it about 20 times on repeat when I first heard it. Super hooky, direct and to the point – no messing about.

Single handedly keeping me in shouty guitar man land are Cloud Nothings. This is technically a 2017 tune because the album’s not out yet but as teasers go it’s pretty enticing. Plus I wanted to put Brand New in here but I don’t think I’d get away with it.

Super slinky electronic funk from the DeeWee label. One for earlier in the night to encourage loosening up, a secret weapon in the warm up for me.

From the split with Ripperton (I reckon V is actually Ripperton as his remix history would suggest) on Fort Romeau’s Cin Cin label, classic chugging electro complete with New Order-alike bassline and Blue Monday-choirs. No complaints here.

I think the Mmoths record is an incredibly accomplished piece of work and this is the standout from it. Deft touches to the tune bring it out of the machinery it was made on and back towards a starker, more humanised sound.