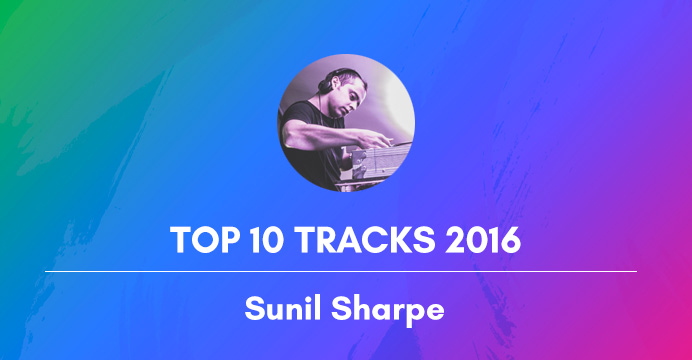 Sunil Sharpe is a Dublin techno DJ and producer who has had a good year with international recognition, an RA mix and Boiler Room appearances too. Catch him on Stephen’s Day in Opium Rooms.
See all the top 10 tracks of 2016 guest selections.

Jerome Hill – It’s Time For The…

To anyone who knows what Jerome does, he is not underrated, but overall I still feel he doesn’t get his rightful props. Here he does some clever chopping and arranging of elements from Cajmere’s ‘Percolator’, adding extra whistles and his own distinctive shuffling drums, to make a serious party track. I don’t have an absolute number 1 track of the year, but this has got played at pretty much every gig I’ve done since I got it! Was also a big highlight of Bloc weekender this year, when Jerome dropped it in his set on the closing night.

Not sure what style you even call this, tribal electro?! Nah, that description sounds quite tacky actually, but it is kind of the style. Either way, it has a really free spirited energy that also becomes very hypnotic. When you hear a track or style as defined as this, that sounds like nothing else around, you have to tip your hat. So often remixes are not really worth the bother but this works so well. Is like the next stage of where UR were going with some of those big, loose electro tracks that they used to put out.

After my Boiler Room set in Dublin I got loads of messages looking for the ID of this. A bellowing techno monster to awaken the dead and kill the dancefloor, this is one of the most powerful hard-edged tracks I’ve heard in ages. I like that it has such a prominent and obnoxious lead sound – something that I feel is missing in a lot of modern techno, much of which is overly focussed on distorted drums or thin bleep sounds.

Randomer has been on fire this year. Creator of such a rounded, rhythmic sound – he’s now becoming the Joey Beltram of his generation in a weird kind of way. Besides having a quite extensive sound palette that peppers his tracks, a lot of the magic lies in his busy but subtle arrangements too. Randomer’s techno has often sounded like another version of Blawan, but tracks like ‘Concierge’ are seeing him go further down a new path of his own.

What starts out like a pulsing, Arpanet style electro track, soon turns into a wailing rave weapon. Steve Conner was one half of the great brotherly duo Bitstream, and his solo material as Adapta since, always gets me excited.

Love KSP’s stuff, and his originals on this release on Vanta Series are strong, but Joe’s remix is the one that I played the most here (and throughout the last quarter of 2016). Intricate, clanging drums underpin a dizzying lead line, that wouldn’t sound out of place on an old shuffle beat Wassermann track or something.

This in fact came out at the end of 2015, but I got it in early 2016. Re-uses the vocal from a mid-eighties track by Quest called ‘Mind Games’ (LFO’s ‘You Got To Understand’ sampled it too) in a devastating repeated effect, all behind some sharp, springing 808s. Delft has been one of my favourite new labels, and LA-4A (aka Ambivalent) has been straddling the line between techno/acid and electro in a really pleasing way.

Actually there are some deeper, arguably more moving tracks on this record (on Answer Code Request’s ACR label), reminiscent of classic early Autechre, but this is the more “direct banger” from the record that I’ve been playing the most. A perfect tool for sending the crowd into a more spaced-out state, before shifting it up or down a gear.

Christopher Joseph – Outside The Lines

I played this a lot early on in the year, always a nice set-opener to kick off with a bang. Some otherworldly synth sequences turn it into an intense trip, reminding me a lot of ’90s Freddy Fresh, but in a tight, more modern production style. Christopher does a solid job with his label Flexxseal, and it’s refreshing to see new artists put everything out through their own label instead trying to land on ‘big’ labels, despite the fact that his music is big label worthy.

Have been following Optimo Trax as closely as I can since it started, and here and there, there have been some real gems. The original of this dates back to 1985 apparently, which while not having too many elements, does lay a solid foundation for what Shan and Janson do with their remix. It’s pretty textbook rave stuff – hoover stabs over breakbeats, but with added uplifting keys to give it a breezier feel. Not a million miles away from some of Special Request’s material, but of this style, this was the one I probably came back to most in 2016.