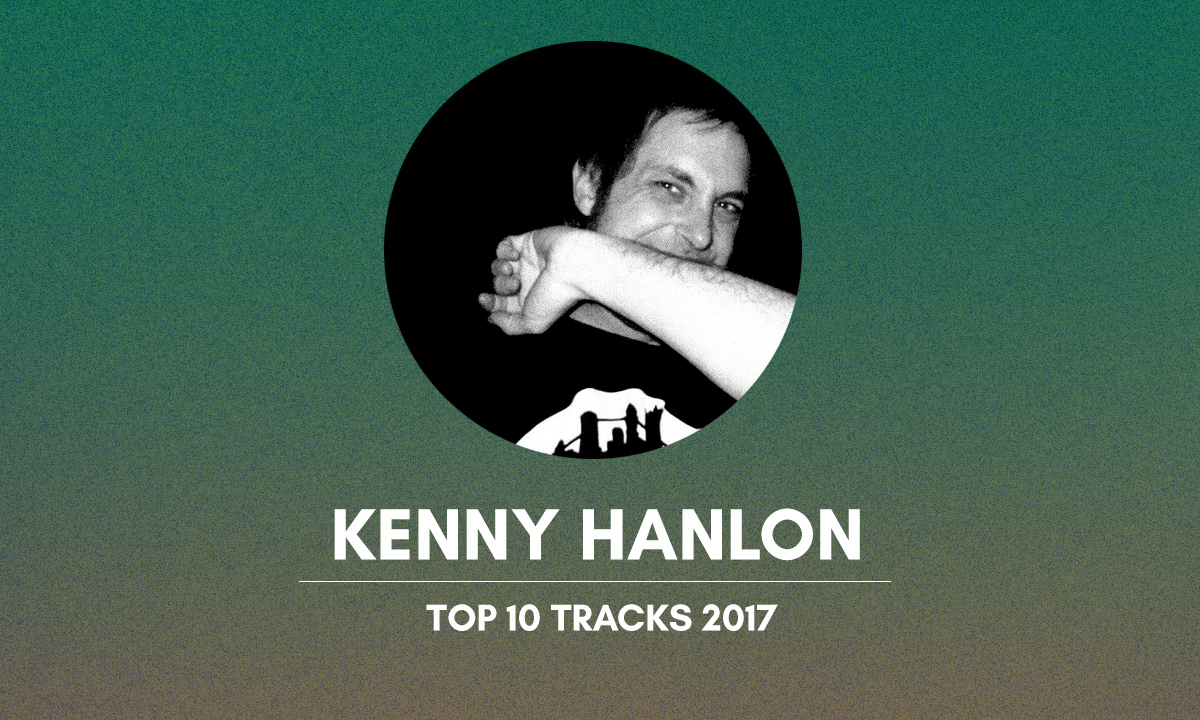 Kenny Hanlon is a DJ and the boss of Apartment Records, who just released a digital compilation of their first 10 vinyl releases.

Nu Era – Space Above Us

I came across a video earlier this year of Benny Klock playing a classic DJ Skull track at some outdoor party where I swear the front row of dancers looked like their grannies had all just died. How did techno get like this? A counterpoint to all the clad-in-black, po-faced navel gazing that has infected the genre in recent times is the joyful, freewheeling funk of Mark – 4 Hero – Mac’s Nu Era project. He returned with two stunning 12 inches that stole 2017, and it was hard to pick a favourite but let’s go with The Space Above Us from the Geometriks EP. Detroit techno meets UK broken beat with the result reminding you that dance music can be about hope too.

Alongside Andrés, Waajeed is an alumni of Detroit hip-hop crew Slum Village. In more recent years he’s been making more noticeable moves into the realms of house and techno and 2017 saw his profile tip over that lil bit more. Sure, he’d probably have done better for himself if he’d just sampled a 90s R’n’B vocal over a computer distorted kick-drum and called himself DJ Home & Away like every second other half-baked, gobshite chancer in 2017’s house music scene but instead, he crafted lush gems like Winston’s Midnight Disco where bass-lines rumble just slightly off to the side of skipping drums and spine-tingling disco-fied strings, creating modern soul & funk music for the dance floor. Massive shout out to the sleek afrofuturism of ‘Shango’ from the same EP.

2017’s freakiest, sweatiest slab of slap-bass, guitar and keys inflected FUNK comes from another long in the game mofo, Ron Trent who takes apart and rearranges even longer in the game Brazilians, Azymuth. This long game – and long song – results in the sort of composition that makes you question why you are bothering to wear clothes right now. Let it all hang out and get freaky.

That feeling of being on a dancefloor absolutely terminated to the point of not being remotely sure if what you’re hearing is right, wrong or even there; Laffrey’s 12-minute collage of Elvis, The Pet Shop Boys and Yello seems specifically designed with this scenario in mind. Gloriously frustrating with its warped teasing of vocal samples it just keeps going on and on and on for the seemingly sole purpose of keeping said terminated dancers wondering what the hell is going on. Beautiful. One could easily imagine Ron Hardy teasing the Muzik Box dance-floor with it throughout a night’s dancing.

Dublin 2017 meets early 70s West Germany in Kehoe’s wonderfully imaginative Short Passing Game LP on the reliably zero fucks to be given Wah Wah Wino imprint. Storm Desmond was its languid kraut-inspired centrepiece, especially elevated by Seán Mac Erlaine’s rich and evocative clarinet playing. All it was missing is Damo Sazuki ranting about god knows what over the top of it (actually, scrap that idea).

Dutch electro master and Producer Most Likely To Make It Into Every EOYL I Do, this time around Overdose has broken into Carl Craig’s studio and crossbred classic 90s Craig sounds into his own electro mainframe. I was tempted to include it in the list purely on the merit of it containing 2017’s most effectively placed handclap but it’s ever-pulsating synthesis of melancholic euphoria also helped it along tbh.

Time to get all soft and emotional. Weeping, melodic acid holds together rolling drums and gentle synths that slowly but surely envelope you like a massive blanket made of sheep’s wool of a cold winter’s night. If Four Tet or one of those lads with studios in a nice, beige room with a good view of a lovely little garden in the countryside had made this you’d have heard it everywhere. Instead, it was made by a little known Israeli producer on a brand new Tel Aviv imprint, so it got slept on. Give it a whirl.

Naive Ted – Death Of Me

The highlight of this year’s Open Ear festival was Naive Ted’s wrestling/turntablism / live hybrid assault on the senses late on the Saturday night. Some folk didn’t have a clue what was going on while others were accidentally clocking each other in the back of the head with flailing limbs – it’s just the way it goes sometimes. Death of Me was the finale; a warped, tricky and wholly unique blend of techno, hip-hop and 70’s prog rock.

Sneaking in there at the very last minute, the hot off the presses Always Evolving In The Sun 12” proved to be a mighty fine surprise when I picked it up in All City just last week. The A-side Pota (Restricted Intelligence) meshes wormhole tekkers with a nearly light, funky touch over its deep-fat-fried half-pounder kick drum. Also, spare a thought for All City employee Lee “Sage” Kelly who was all up in a tizzy ‘cause his boss, Olan, wouldn’t tell him who made the record. Word on the street is it might be Irish. Hupyaboya. (no stream/youtube of it up anywhere yet)

Alright, this one is dumb as all fuck. It’s nary got an original bone in its body but it’s getting a shout out for just being so damn good at what it does. Somewhat akin to being wedgied by a 303 it starts off with a dumb DOM DOM DOMINATION vox riff and continues on down that route until its fully booted you into submission with a never-ending cavalcade of snares and squelches – the ignorant polar opposite to PRZ’s gentle tweaking. Around the 2 and a half minute mark, an extra trance stab arrives in to just up the stupidity stakes a bit more, as if it were needed. Wonder if it would raise a smile in the crowd of that video I mentioned earlier. Probably not.