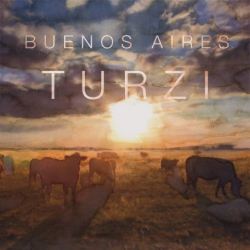 I wasn’t going to post about this at first but it turns out both of these tracks are supreme growers: like a beanstalk in my brain. Turzi are a French five-piece led by Romain Turzi who released an album A in 2007. At the end of the month, they release naturally enough, album B which will feature Bobby Gillespie and Brigitte Fontaine as guests. This chocolate-coloured 12″ taster was released Monday on Record Makers featuring the tunes ‘Buenos Aires’ and ‘Bombay’ and a couple of remixes.

‘Buenos Aires’ is motorik but cinematic and sort of sounds like it borrows the synth line from Enya’s Orinoco Flow.

On the flipside is a remix from labelmate Sebastien Tellier but I’m digging this Middle Eastern-influenced remix of ‘Bombay’ from Django Django.