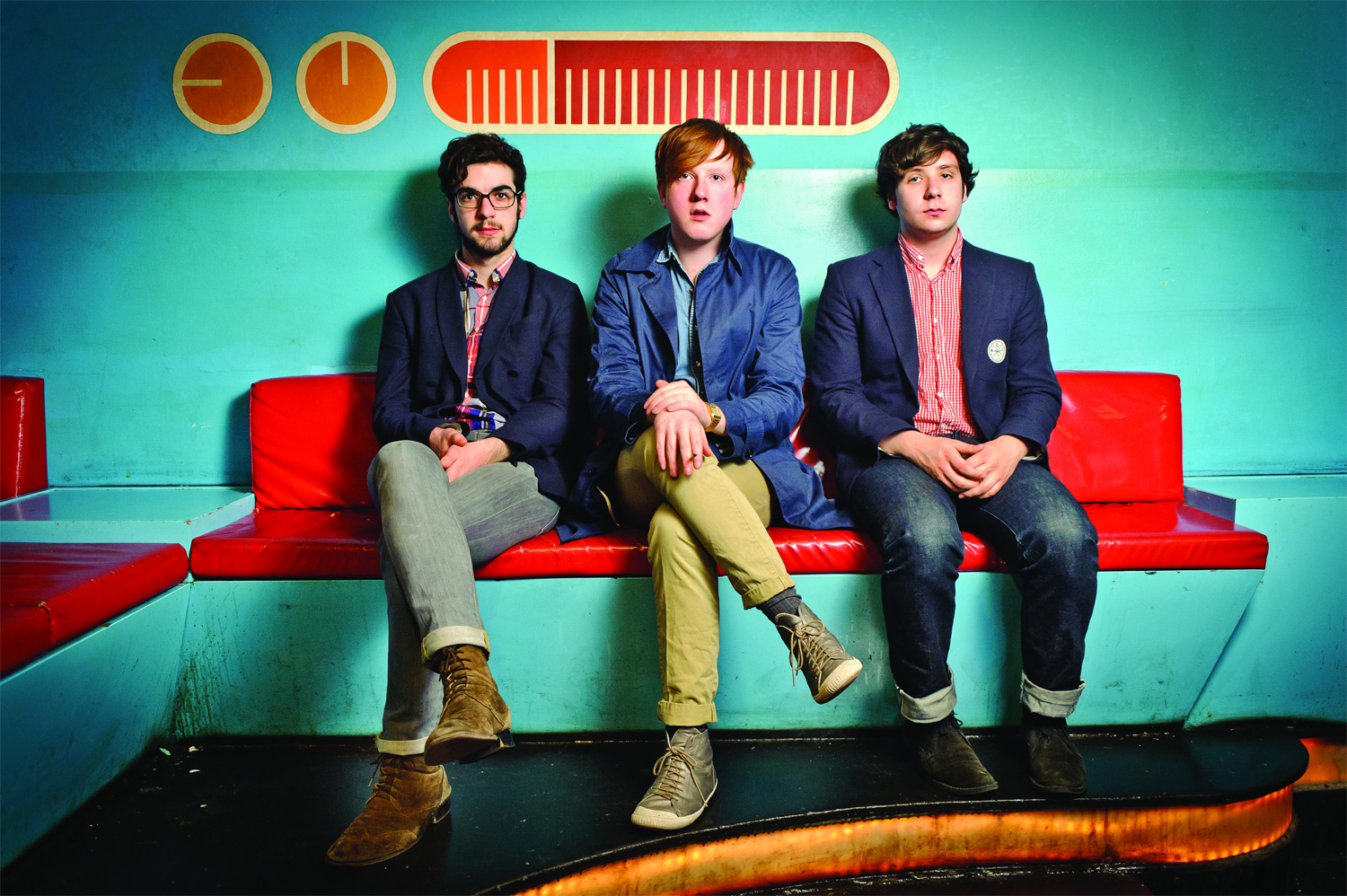 Between festivals, recording, touring and the small matter of one of them participating in the Olympics Opening Ceremony, county Down’s Two Door Cinema Club haven’t really let up since they first appeared three years ago. Now that their second album Beacon is out, not much has changed. The band’s calendar has North America, Europe, Australia and European shows up until next April and they’ve a big show in Dublin’s The O2 on January 19th.

The whirlwind of the last three years have culminated in Beacon. The trio of Alex Trimble, Kevin Baird and Sam Halliday took five months off to get the ideas for new songs and to record what would become Beacon earlier this year, while playing once-off shows in-between.

Trimble was listening to some well-known names he had perhaps, taken for granted. “I listened to a lot of The Beatles, Motown, Kraftwerk, Talk Talk and the Beach Boys,” he says. “Those huge bands that are in the background your whole life. I got into them and really appreciated them. But the Spice Girls and Jay-Z were also on the stereo, as was Little Dragon, Alt-J and The Walkmen. All kinds of stuff from all corners of the globe and all different genres.”

“The travelling aspect, the experiences, the crazy stuff that we do, the leaving people behind, wanting to be somewhere else; all of this informed the record” says Alex. “Most of the time you’re really enjoying yourself but there’s a lot of guilt and inner conflict.”

That guilt can be read in the lyric sheet of Beacon. “I don’t know where I am going to rest my head tonight / So I won’t promise that I’ll speak to you today,” opines Alex on Beacon opener ‘Next Year’. Or the homesick “drawn apart / New York and London / All I see now / Are distant drumlins” on ‘Sun’.

Familiar themes for young successful bands perhaps but no less hard to deal with the knowledge that others have been there before. Offsetting the guilt, there’s a palpable sense of wonder with other parts of the world they’re discovering for the first time, like so many before them.

“After the first album we went to America, Australia, Asia and all these crazy places like Mexico. We met all these interesting people, won our first award, we developed a self-appointed fan club which was amazing,” recounts Sam.

They were also the winner of The Choice Music Prize for Irish album of the year 2010 for their debut Tourist History, and picked up a €10,000 novelty cheque and a trophy as the surprise winners in a award show in Vicar Street in March 2011.

“It was really weird. Everyone always says ‘we didn’t expect to win it’ but we really didn’t,” remembers Kevin. “We hadn’t discussed what we would say if we did win it. To us, there was no chance. On the day we joked around talking about what we would do if we got it.”

“That was the first ever award we ever won as Two Door Cinema Club,” says Kevin. “It was really special for us to get that in Ireland and be recognised here by the people who first discovered our music.”

“We didn’t realise there was an actual prize!,” exclaims Alex. “It was either give it to charity or buy jet skies so we gave it to charity.” The money went to Abaana, a Northern Ireland based charity raising money for children in Africa.

“A couple of days after that we went to the MTV Woodie Awards in Austin, Texas and it was a huge production with a massive stage, giant LED screens and loads of celebrities,” says Kevin. “It was ridiculous.” A stark contrast to the intimate surroundings of Vicar Street. The band continued on in their constant routine of touring and breaking iinternationally, playing the likes of Jimmy Fallon and other big U.S. talk shows as well as picking up further memorable experiences along the way.

“There are a couple of pinpoints of really, really mindblowing experiences we had, like one was a day we had in Mexico city, a day off where we drove out to the pyramids,” sad Alex. “We had this crazy time where we met this native guy and he took us there, performed all these ancient Indian rituals, then took us to a bar in the desert and gave us tequila all day.”

“Travelling to these places really informed us about the culture and music of others,” says Sam. “I maybe wouldn’t have listened to 8-minute long electro track before. But going to a club in Berlin, just watching people zone out and dance to it, I got into it. I didn’t really understand how anyone would enjoy that kind of music until I’d experienced that.”

“Those kinds of things were great for expanding our musical horizons,” says Sam. “You don’t appreciate these things until you understand them.”

Listening Post: Kwes picks some of his favourite tracks…