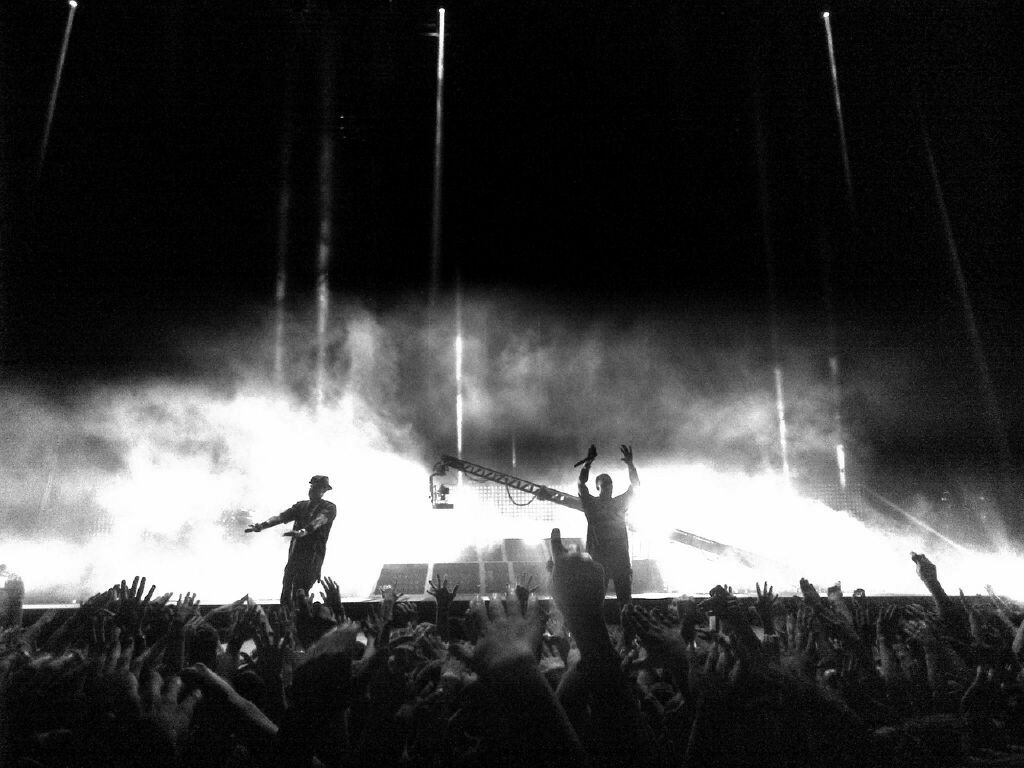 It can be very hard to separate the subjective from the objective when it comes to live experiences. Some gigs are great because you feel a connection to the artist playing or the songs performed. Some gigs are great because of atmosphere and occasion. An objective reading on Jay-Z and Kanye’s Watch The Throne show in the The O2 in Dublin on Saturday night, would suggest that this show had it all. Subjectively, throughout the 40-strong song set, I felt that a live concert experience rarely gets better than this.

From large plinths with visuals screens on four sides where the pair performed in the crowd to giant dual ultra-HD screens, a massive bank of LED lights and lasers to a massive American flag to a custom-built stage that looks like it was modeled on sets from Star Wars, Watch The Throne’s stage setup was next level.

Here was a show fit for two of the biggest rap stars in the world yet, all the pyrotechnics and fire is great but if you don’t have the show, it isn’t going to work. By joining forces as Watch The Throne, Jay-Z and Kanye also joined two of the richest discographies in rap, making the show a unrelenting set list filled with classic tracks, taking the set list also (just look at it below), to the next level.

It was fascinating watching how these two sparring partners performed. Jay-Z was the level headed of the two, the elder, the cool older bro, content and crowd-friendly. His solo songs from ‘Jigga What’, ‘Izzo (H.O.V.A)’, ‘Big Pimpin’ to ‘I Just Wanna Love U’ were performed with precision and to the track.

Kanye meanwhile, rages harder, popped around the stage, hit the floor on his knees regularly, stopped songs twice because he wasn’t happy that the crowd were giving as much as he was.

Kanye is still the diva, the one who pushes things forward of the two, the one who is, and was, audacious enough to do an album almost entirely in Auto-tune let us not forget. He falters during one of his solo runs during an elongated ‘Runaway’, the only time the pace and energy of the show dissipates. Performed on the centre plinth in the crowd unadorned by anything but red lights and visuals, Kanye’s outpourings almost feel intimate if a little indulgent. It’s not long before he finds his humour by instructing a girl he focuses his gaze on during his adlib to “look at me when I’m singing to you!!!” before losing any pretense by jokingly singing “Should I hit the knees?” in a heavy Auto-tuned voice before doing just that.

Together, they are unstoppable. Songs from Watch The Throne are performed alongside the duo’s big hits ‘Empire State of Mind’, ‘Stronger’, ‘Touch The Sky’, ‘Flashing Lights’, ‘Gold Digger’, Hard Knock Life’, ’99 Problems’ and ‘Run This Town’. There were personnel and a DJ at the back of the stage doing something, I’m not sure what exactly, but all these two need from them is a backing track to set the crowd off. There is no live instrumentation but you wouldn’t even miss it. There’s no room for guest appearances either, even ‘Monster’ is cut short before Nicki Minaj’s verse. This show was about two men and two men only.

The bums of those high up in the seats (including myself) never touch the seat once. There’s no time. From the opener ‘H.A.M.’, the show is as entertaining as it gets and the atmosphere is electric. ‘On To The Next One’ into ‘Dirt Off Your Shoulder’ was a personal highlight for me but they save the best to last.

‘N****z In Paris’ is the showstopper, performed 11 times in succession the week before in Paris, Dublin gets four renditions. Far from tiresome, the song’s beat is as repeatable as it gets. With every performance of the song, it got more fun rather than too much. I could have danced to that beat eight more times without question. That shit cray. One of my favourite gigs ever.

H.A.M
Who Gon’ Stop Me
Try a Little Tenderness (Otis Redding)
Otis
Welcome to the Jungle
Gotta Have It
Where I’m From
Jigga What, Jigga Who
Can’t Tell Me Nothing
Flashing Lights
Jesus Walks
Diamonds from Sierra Leone (Remix)
Public Service Announcement (Interlude)
U Don’t Know
Run This Town
Monster
Power/Power Remix
New Day
Hard Knock Life (The Ghetto Anthem)
Izzo (H.O.V.A.)
New York, New York (Frank Sinatra)
Empire State of Mind
Runaway
Heartless
Stronger
D.A.N.C.E. (Justice)
On to the Next One
Dirt Off Your Shoulder
I Just Wanna Love U (Give it to Me)
That’s My Bitch
P.Y.T. (Pretty Young Thing) (Michael Jackson)
Good Life
Touch the Sky
All of the Lights
Big Pimpin’
Gold Digger
99 Problems
What a Wonderful World (Louis Armstrong)
No Church in the Wild
Lift Off (Interlude)
N****s in Paris
N****s in Paris
Encore:
N****s in Paris
N****s in Paris

MCD Photo gallery from The O2.