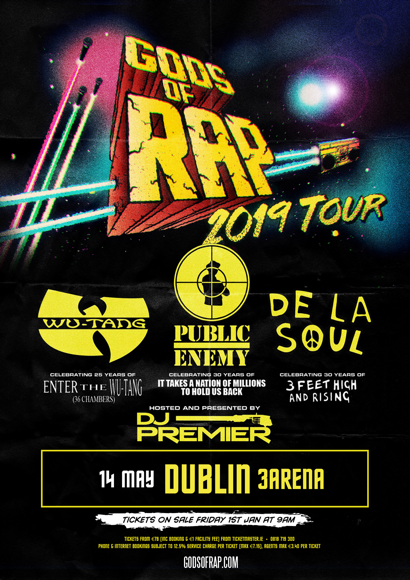 No joke. Three of the most influential rap groups in history – Public Enemy, Wu-Tang Clan and De La Soul will perform together at the 3Arena on May 14th this year as a triple header.

The night will marking the anniversary of three classic records:
Wu-Tang’s Enter the Wu-Tang (36 Chambers) which turns 25
Public Enemy’s It Takes A Nation Of Millions To Hold Us Back which turns 30
and De La Soul’s 3 Feet High and Rising which turns 30

The night will be hosted by none other than DJ Premier. It’s called the Gods Of Rap tour and tickets from €78 plus fees will go on sale this Friday 01 February at 9am from Ticketmaster.