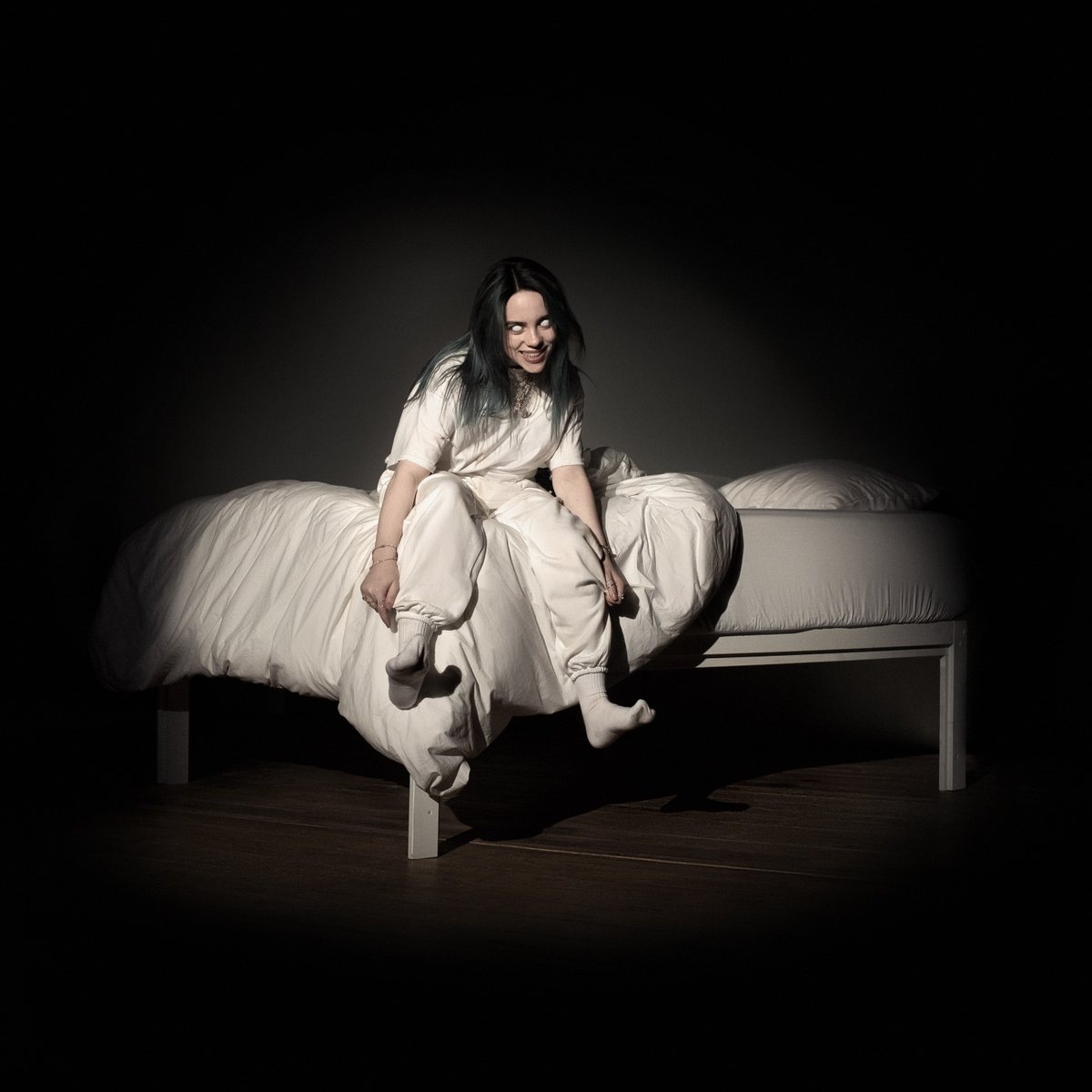 There’s something strange about saying that a 17-years old’s debut album has been long awaited, but that’s the reality with Billie Eilish.

This teenager is already a music industry veteran having signed her record deal back in 2016 after her delicate ballad ‘Ocean Eyes’, originally uploaded to share with a dance teacher, went viral on Soundcloud. Within the year she soared to the peak of pop music gentry with a stellar EP don’t smile at me, sold out a world tour and become one of the biggest streaming artists in the world.

The lead single from that EP Bellyache detailed the casual murder of her best friend, and yet that did little to fend off any interest from her peers – in fact, it stimulated it. That’s one of the most interesting things about Billie and her draw, her music and aesthetic are totally targeted towards people her own age, but that doesn’t mean old fogeys like you and me can’t enjoy it too. The singer possesses the dark pull of Lana Del Rey and the blithe social awareness of Lorde but comparisons to Marilyn Manson and Billy Joel are equally justifiable, Dave Grohl even cited her as the saviour of rock and roll – which presumably was his way of saying Eilish is someone who could change popular music.  The singer contains multitudes, yet what is consistent is her ability to translate this range of influences into an upbeat manner and that’s what makes her music so accessible to young teens.

This appeal is laced all over When We All Fall Asleep, Where Do We Go?, the album and rhetorical question that she attempts to answer throughout the 14 tracks. She told Zane Lowe that the album was inspired by sleep paralysis and night terrors, and this is something worth bearing in mind on first listen (it’s also worth bearing in mind the bass threshold of your headphones – it gets heavy). There is nothing cohesive or cogent about sleep paralysis and the same goes for the record; it rises and falls sporadically in all of the places that you’d least expect it to and expels most of its energy in the first half before drawing to a gentle lull towards its end, just as sleep paralysis does.

For an album that’s centred on decoding the monsters that exist under her bed, there is little discernible fear in her. In ‘Bad Guy’, Billie mocks the traditional archetype of a ‘tough guy’, “so you’re a tough guy, like it really rough guy, just can’t get enough guy, chest always so puffed guy” and then challenges this by presenting herself as an equally sinister and menacing presence, “I’m that bad type, make your mama sad type, make your girlfriend mad tight, might seduce your dad type – duh”. Similarly, in the bass saturated ‘You Should See Me In A Crown’, she offers the title as a brazen response to someone calling her pretty.

These lines suggest that Billie isn’t as detached from all that teen bravado as she has formerly lead us to believe; in the outro of ‘Bad Guy’, she sings “I like when you get mad… You said she’s scared of me?, I mean, I don’t see what she sees, But maybe it’s ’cause I’m wearing your cologne”. Ouch. It’s moments like that that catapult the listener right back to being 16 and trading jibes with your peers, cat-fights in the school yard over boys with the gravitas of Brexit disputes.

In ‘Xanny’, the singer refuses prescribed drugs but employs trippy vocal effects that would convince you that she’s on them, “I can’t afford to love someone, who isn’t dying by mistake” she croons. The song presents anxiety in a succinct manner and arcs it in a way that a lot of teens can surely relate to, “I’m in their second hand smoke, still just drinking canned coke, I don’t need a Xanny to feel better”. It presents Billie as anti-drug, and it almost feels like a clap-back to the medication consuming demographic that are her age-group. The same can be said for ‘ilomilo’, a song inspired by the video game of the same name, where she addresses anxiety about losing those closest to you, “the world’s a little blurry, or maybe it’s my eyes, the friends I’ve had to bury, they keep me up at night”.

We already knew that Billie and her brother Finneas (who produced the album) were prolific lyricists, but the album takes this to another level: in ‘All The Good Girls Go To Hell’, she sings “all the good girls go to hell, cause even God herself has enemies, and once the water starts to rise, and heaven’s out of sight, she’ll want the devil on her team”, while ‘When The Party’s Over’ has the ability to soften even those tough men she sings about earlier in the album.

‘Listen Before I Go’ is reminiscent of material earlier in Billie’s career like the exquisite ‘Burn’ or ‘Six Feet Under’, with minimal instrumentation and no cheap jives or digs. It’s delicate, vulnerable, and shows her to possess the maturity of a writer twice her age. The song starts off as a gentle ballad before a massive bass sweeps in and reveals that there’s a greater vision at play here.

The vocal production on the album deserves a whole paragraph itself – not once does Billie over exert herself, if anything she renders close listening mandatory with a feather light vocal tone and emotive, deep breaths that are audible on the mic. It’s unusual in pop music not to hear the singer belt in the chorus or aim for the crystal high notes – but if we were start talking about the different ways in which Billie defies the pop rule book on this album, I’d need a larger word count.

Finneas’ presence can be felt all over the record. Where the lyrics become dark and sinister, he counteracts it with bright synth lines and xylophones and where the mood shifts momentarily lighter, he throws in a larger than life saw-tooth bass to level the playing field. There’s a lot of unusual sonic elements; one of the squeals you hear in ‘Bury A Friend’ is actually a voice recording that Billie took at the dentist of an instrument being used to shave off her Invisalign, and the quote at the start of ‘My Strange Addiction’ is taken from the America Office TV before a seductive, Justin Timberlake worthy synth melody enters.

The fact that the only credited writers on the album are Billie and Finneas in impressive, especially in an industry that usually employs five+ writers at a time to craft a song, let alone when those songs are going to be housed on one of the biggest albums of the year. This is surely a contributing factor to the single mindedness of the record, unlike recent albums from some of Billie’s contemporaries such as Sigrid or Maggie Rogers that felt like safe successes in their carefully curated formats and predictable structures. It might very well serve as a lesson to labels not to meddle with the creative process of their artists.

Two and a half years ago I wrote that “it’s in her slower songs that Eilish really shines” and this still rings true. She truly saves the best until last with ‘I love you’, the guitar based ballad that sees the album out. There are no sonic surprises here, no sudden bass swells or vocoders, just Billie and Finneas harmonising each other over acoustic guitar strums and heart-wrenching vocals that has the ability to win over even the most skeptical of listeners.

When We All Fall Asleep, Where Do We Go? is a record that revels in its dark moments and basks in its lighter ones, and is already an early contender for album of the year. As for answering the rhetoric When We All Fall Asleep, Where Do We Go?, the album might not have all the answers but we’re not in any rush for Billie to figure it out if it means she keeps making music like this in the mean time. It exists on a lunar-outpost of its own creation, far removed from anything in the pop periphery, and we think it’ll be a while before it’s joined there by anything of similar calibre.