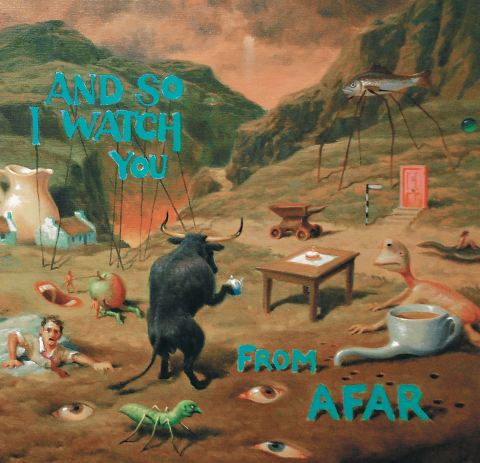 You’ve not likely forgotten the Irish acts hullabaloo in The Ticket and on Jim’s blog a few weeks back. Well just to stress what rude health Irish music is in at the moment. Here are the top 5 Irish albums I’ve heard so far this year, in no particular order.

Jesus, it’s only April and we’ve got more great records than Ireland got Olympic medals last year. I will get around to talking about all these on their own merits but right now I want to talk about how much Belfast band And So I Watch You From Afar‘s debut is knocking my socks off. It’s such a hard thing to make instrumental rock music without falling back on cliché and repetition but I’m super impressed at ASIWYFA’s stab at bulging rock histronics. It’s epic and engaging for the entire 65 minutes of music, waves of riffs and crashing cymbals continue to keep the manic atmosphere going. As James Hendicott notes in his review for State, “there’s not the slightest hint of the two dimensional”.

One thing I often do while listening to albums which I’ve never disclosed here before is listen to them in reverse order. It shows up front-heavy albums for lack of sustainability they actually have, serving you up the weakest songs first. If an album’s last quarter is not as grabbing as its first quarter then it’s just not a good album. Full stop. There is no excuse in this single-track generation for filler. Thankfully, ASIWYFA’s debut suffers from nothing of the sort. ‘Don’t Waste Time Doing Things You Hate’ as well as being a good life mantra also serves as the heaviest Efterklang-sounding track you’ll ever hear. The reversed order is frighteningly well-segued and leading to the mammoth opening track ‘Set Guitars to Kill’ is aired. Incendiary stuff.

All of this times perfectly (and coincidentally, honest) with State’s first proper foray into gigs tonight in The Purty Loft in Monkstown (It’s the burbs – what a novelty!). State has teamed up with AU to bring you the triple bill of Villagers solo, Alphastates and And So I Watch You From Afar from 8.30pm tonight with myself and others spinning tunes til 2.30am. I can’t wait to hear what this sounds like live. Turn this UP!

And So I Watch You From Afar – Set Guitars to Kill

And So I Watch You From Afar is out on Smalltown Records.

I Am The Cosmos State Mix

State Top 50 Albums of the Year