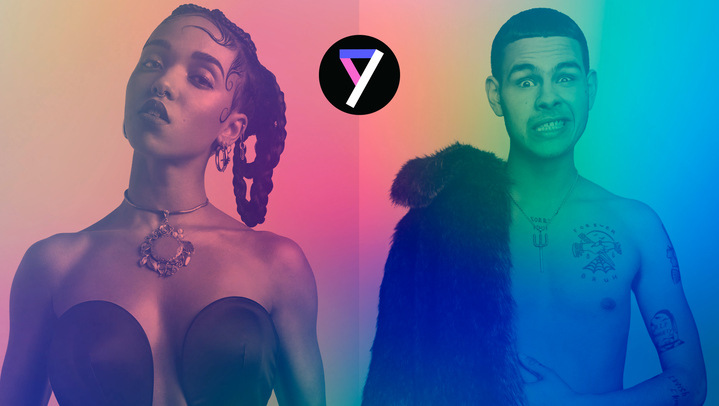 Hot Chip recently announced their upcoming album A Bath Full Of Ecstasy, the first since 2015’s Why Make Sense? and last week they shared a new track and video to give us a taste of what to expect. ‘Hungry Child’ is a synth-saturated, disco-beat laden bop that will remind you of all the reasons why you fell in love with the band in the first place. The music video is fantastic too. They play the Olympia in October.

No One Is Any Fun

All Tvvin’s new album Just To Exist comes out this Friday and they’ve done a good job of getting us hyped up about it with a steady stream of great singles, the latest of which saw release last Friday. ‘No One Is Any Fun’ featuring Sorcha Richardson is an irresistible slow burner with ascending synth lines and building percussion lines that reach a booming drop after the second chorus. Sorcha’s influence is discernible in the nostalgia-laced lyrics which, mirrored with All Tvvin’s electro-infused melodies, is a collaboration we’d love to hear more of.

Take it straight from the horse’s mouth – “Music to me is the biggest connector of people. It don’t matter what social circle you’re from, it bonds people across divides. And that’s why I do music: to bridge the gap and bring people together.”

Anderson .Paak has been putting the pro in prolific lately. Ventura is the second album from the Californian in 6 months. We thought it was largely hit and miss, but the smooth R&B vibes of ‘Jet Black’ mark it out as an easy highlight from the project.

Two artists at the very forefront of Ireland’s electronic/pop scene came together to make ‘Dancing Bug’ and the end result is as glorious as you might expect. Both Le Boom and Æ Mak bring their fine china on this one, motivated enough to fall into the realm of dance and more than catchy enough to be considered pop. Plenty of good dance moves and even better fruit in the video too, know your nutrition!

FKA Twigs returns with a hauntingly beautiful track, accompanied with an equally stunning music video. The video is particularly personal for the artist after recovering from laparoscopic surgery to remove 6 fibroid tumours from her uterus. She posted on Instagram saying that dancing played a huge part to her recovery. The video showcases an emotional dance performance by the singer. The track has a soft piano playing throughout which perfectly compliments FKA Twigs airy and trembling vocals. A steady drumbeat builds in the song making this number very hypnotising.

London’s finest Grime MC Stormzy made his long-awaited comeback, following the release of the superb Gang Signs & Prayer in 2017. ‘Vossi Bop’ heads the right direction from the get-go. While we loved the emotional maturity and open-mindedness of Stormzy’s last LP, to hear the MC come back full of aggression and braggadocio on ‘Vossi Bop’ is so very welcome. Production is absolutely ace too, put some good headphones on and check out the low end on this one.

There’s a distinct gospel quality to Rakei’s ‘Say Something’, with added depth courtesy of the modern electronic arrangement. The single comes as part of a double announcement, the first being Rakei’s new LP. Called Origin, the album will be released on June 14th on Ninja Tune. Rakei has also announced a tour to coincide with the album’s release. This, thankfully, includes a Dublin date on October 8th in The Academy.

Ireland’s breakout act of 2019 put their debut LP Dogrel out into the world at the start of the month. Luke reviewed the album in-depth at the time. ‘Roy’s Tune’ remains an easy favourite, with its lilting detachment and sweet melancholy.

Fly-Lo has got a new record on the way. ‘Spontaneous’, featuring Little Dragon, is one of the singles from it and it’s a baffling mix of funk, soul and avant-garde electronica. Rejoice.

The Art Of Living

Warp Record’s man Bibio went hard on the English folk influence on his new LP Ribbons, not that we’re complaining. ‘The Art Of Living’ is a beautiful track, a hybrid of art folk and electronic influences.

Just Mustard’s ‘Frank’ is a song that the band have recognisably played live in recent months and is up there with the best of their tunes so far with vocalist Katie Ball’s vocal performance ebbing and flowing against the band’s undulating atmospherics. It’s a split release with another tune called ‘October’, recorded in Start Together Studios, Belfast by Chris Ryan. Both songs are on a 12″ vinyl that can be ordered on Bandcamp.

The collaborative LP between Quiet Arch artists Ryan Veil & Elma Orkestra seems set to be one of the strongest domestic releases of the year. ‘Arrival’, its latest single, is an immersive and cinematic piece of electronica.

Kevin Abstract is the founder of Brockhampton, the boy band made up of 15 various artists from rappers and producers to art directors and artists, and this track ‘Georgia’ is taken from his new EP as a solo artist ARIZONA Baby. The song plays on lyrics from the classic ‘Georgia On My Mind’ and gives them a hip-hop makeover with pitched vocals and smooth synth lines.

Davy is back with a new release, The Pilot on the label and the lead-track from the 12″ gave me chills of excitement. Live shows from Kehoe have really leaned into the kraut, electronic, noise-making world-building you can hear on ‘The Pilot Part One’ and it’s a thrill-ride for its entire duration with nods to those genres alongside industrial, minimal electro. The band Suicide are the closest comparison to this piece of music, a suspended rolling rhythm that creates its own angles, a void for the music and Kehoe’s howls to exist.

Derry dream pop artist Soak is back with her new album Grim Town and she is going from strength to strength. Soak’s first album, Before We Forget How to Dream, excellently depicted the troubles of a teenager. Now her new album shows the maturing that she and her music has undergone. ’Maybe’ is the fifth track on the album and it’s a showcase of her talent in songwriting. The song features flowing vocals and a guitar riff that will have you in the mood for summer festivals. We’ve been waiting four years for this comeback and judging by this track it’s definitely worth the wait.

Holy Ghost! haven’t released an album in six years but we haven’t long to wait now: last week they finally announced their upcoming LP titled Work and confirmed that it’s set for release later this year (date TBC), along with a new track ‘Escape from Los Angeles’. The track comes in just over seven minutes long and it’s got all the analogue synths and disco beats that you’d want from the band, plus delicious, hook-laden vocal tones from the pair.

The Rusangano Family Clare MC God Knows has been on an energy crush this last few months in the gearing up into the release of his debut solo single. First, there was was the Loah Bantum remix before his appearances on the Sim Simma Soundsystem EP alongside fellow MC Denise Chaila.

So we arrive at that solo single ‘Crown’ recorded with French producer and singer Awir Leon in Funkhaus Studios in Berlin as part of the PEOPLE collaborative festival run by The National’s Dessner Brother and Justin Vernon. ‘Crown’ shouts out GK’s peers in Irish rap with references to Kojaque, Lethal Dialect, Jafaris, JyellowL, GI, Same D4ence, Costello among references to international artists like Obie Trice, 2Pac, Kendrick and Childish Gambino.

Need some dark electronica in your life? Well, we have you covered. Imi’s ‘The Fence’ is foreboding, constantly adding layers of suspense and intent. It’s a relatively minimalist mix, not that you’d notice. Instead, the listener finds themselves totally immersed in this murky world.

Conor Oberst and Phoebe Bridgers’ collaboration under the Better Oblivion Community Center name continues to bear fruit with the affable ‘Little Trouble’. The pair’s shared chemistry, especially on vocal duties, and their poetic diction continues to tie the material together and provide ample individual personality to the music.

Aldous Harding’s Designer is a fantastic LP. Downbeat, haunting folk rock from the New Zealander. We get serious Elliot Smith vibes off of ‘Treasure’, especially in its fragile vocal delivery.

Emma Garnett aka Fehdah is really starting to show her vision on her most recent tracks.‘Buffer Fly’ is her newest, a most dynamic, dense and swirling song featuring a collaboration with sister Sallay Garnett aka Loah that pushes those production chops forward into a deeper melding of house and afrosoul, recalling the work of Machinedrum. It’s a confident and twisting turn from Fehdah.

Portland native Weyes Blood released her new album Titanic Rising last week and it’s been a hot topic of conversation ever since. The album is bursting with Lana Del Rey-esque electronica with a natural ambience thanks to rich instrumentation. ‘Andromeda’ is the second track on the album and it’s an interesting fusion of old and new; there’s a classic sensibility about it in the structure and lyrical content but there’s a futuristic undercurrent running through it too in the Stranger Things-esque stings and synths. If you liked Julia Holter, you’ll love this.

‘Gimme’ debuted in April on Zane Lowe’s Beats 1 show and features a co-production from Hudson Mohawke and BJ Burton (Bon Iver, Francis and the Lights) so it’s keeping in line with Banks dark pop aesthetic with interesting sounds and twisted vocal pops. It is a co-write with Frank Ocean’s keyboardist and player Buddy Ross (Frank Ocean, Vampire Weekend, Wet).