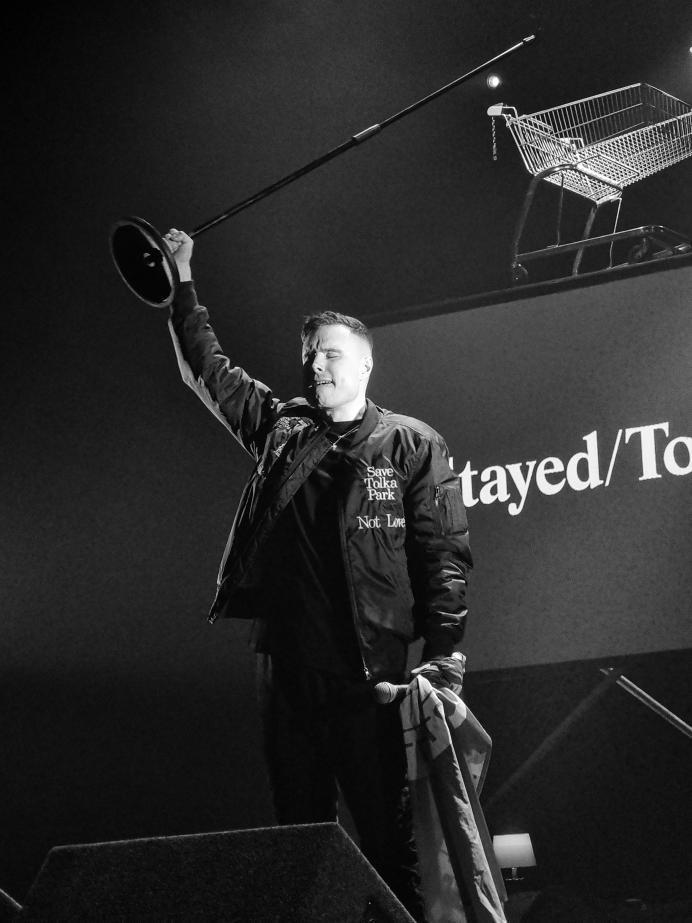 As David Balfe slammed his microphone onto the Olympia stage after an hour of brandishing visceral pain, hurt, anger, happiness and grief, it felt like a letting go, a necessary exorcism.

There is no background story to For Those I Love, David Balfe’s true story of friendship, hardship and dealing with the death of Paul Curran is writ large on the album, and on the stage.

Before the curtain opens, we hear Curran’s voice on a recording of ‘Dear James’ by the band that Balfe and others played in – Burnt Out, and Jackson C. Frank’s ‘Blues Run The Game’ sets the scene.

There’s an emotional and personal resonance to this show that felt like no other gig I’d experienced.

With a stage set that feels like a play backdrop, with flowers strewn on the ground, an elevated shopping cart on a scaffold, a suspended tree and two screens showing the visuals and 3D renders largely made by David Balfe himself.

“I have a love, and it never fades”

Alone on stage, with only a Shels FC Coolock Reds flag draped from his mic, David Balfe pours everything into the words that relay an intensity that is at times, uncomfortable and incredibly moving.

“I can feel you in this room!,” Balfe howls into the theatre to his friend passed away and I go to the bar after two songs just to reset myself. I’ve never blubbered so many tears at a gig.

Do you dance to someone else’s heart-on-sleeve pain? Dancing keeps the nervous system at bay, and Balfe’s productions evoke the best dance music of the past, weaving samples of grime, and nods to Mike Skinner’s own everyday confessionals.

Balfe’s bravery to open himself and his trauma to so many people in public is a cathartic experience, and it accessed a channel of billowing comforting sadness that had me thinking of those who have passed.

Balfe’s emotions were not without smiles or a Shels chant, yet what is left is one man’s deeply personal experience translated into a room of people filled with the magnetic acknowledgement of connection in loss.

His pain is personal, but that pain is universal.