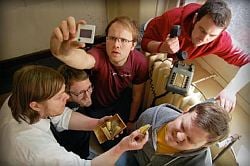 Barry Bracken presents Wired for Sound on 2XM along with Lauren Murphy and Jan Ní Fhlanagáin. The show goes out on Thursday 7pm, repeated Saturday 6pm. Here’s his top 5.

After a big splash in 2008 their recent relative scarcity last year has done little to mute anticipation (for me anyway) of their impending debut album – due this Summer. Their first EP Any Other Port In A Storm gained plenty of radio play, led to some Steve Lamcaq name-checking and landed them support slots with Vampire Weekend, The Macabees & Nada Surf. Not bad for a first release. Will the debut long player be worth the wait? I think so.

The Ambience Affair appeared on the scene in early 2009, quickly established themselves with two fine EPs and, most recently, a soundtrack appearance on CSI: NY of all places. Musically dexterous, the duo utilise loop pedals to create layered, intense and driven songs. They’ve a rather nifty sideline in beautifully crafted videos too.
The Ambience Affair – ‘Parting Patterns’

Recently home from a marathon US gig stunt that included SXSW among many others dates, Dublin’s Autumn Owls two E’s exude an intricate, intense, and lyrical sound inviting Wilco and National-esque comparisons. ‘A Thousand Blind Windows’ is a particular stand out track. They’re off to NXNE in Canada in June and intend to record their first album before year’s end with young Irish desk-merchant Ciaran Bradshaw (Dark Room Notes, Olivcer Cole, Subplots) slated to produce.

The Belfast thrash dance trio have already provided us with a bona fide pop gem in ‘Asylum’ – pretty much their first song. Freshly signed to The Richter Collective (hands down the most exciting Irish label at present) all they need to do now is get some more tunes out there. The future though bodes well, very well…

Another one of The Richter Collective’s “Massive”, Bats are a 5 piece mash-up of math, metal, post and progressive rock. Their live show can border on sheer lunacy. But their debut album shows real smarts – Red in Tooth and Claw is a great listen. Just sit back and enjoy the ride. Be really interesting to see where they go from here on album two.
BATS – ‘Higgs Boson Particle’ by Nialler9