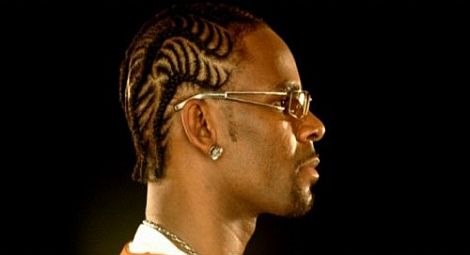 I read an article by Marc Hogan on R Kelly recently and I’ve been wondering what the answer to the question is. Is he a musical genius or a comedic novelty act?

Culturally and musically, he is responsible for the worlds first meta-song hit with the “Ignition Remix” – a song in which the main purpose of the chorus is to tell us the song is a remix as well as unique vocal style of syncopated singing rap he employs on his records. Let is not forget the seminal episodal hip-hopera Trapped in the Closet. It’s with these kind of tricks that Kelly blurs the lines between musical ingenuity and comedy. Of course, it’s hard to ignore the disturbing sexual allegations in all of this especially considering Kelly is a self confessed “sexosaurus” (See lyrics from the bizarre “The Zoo”) .

The genius of the man is his ability to appeal to different audiences as Hogan discusses:

So with that in mind, I present to you “Sex Planet” from Kelly’s new album Doubled Up. I can’t imagine anyone honestly listening to this song in the bedroom and feeling the pun-heavy lyrics in any heartfelt way. On the other hand, play it to your friends and enjoy the songs disturbed comedic value with literary lines such as:

“I won’t stop until I give you meteor showers”

With lines like this, I imagine Kelly living on both Music Planet and Comedy Planet but never committing to either. Why would he? He’s smart. Both camps sell him records (50m worldwide to date) and keep him in the public consciousness after all these years despite the sex charges. Try as you might to parody him (As Dave Chappelle did) nobody parodies Kelly better than Kelly himself and that’s why he is both a genius and a comedian. Just don’t play his albums in the bedroom.

Jupiter
Pluto
Venus and Saturn
I’m leavin Earth girl to explore your galaxy
Ten to zero
Blast off here we go
We’ll climax until we reach Mercury
Girl, Tell me are you ready girl
To take a trip out of this world
I guarantee you’ll like it
It’ll take your breath away
Gonna get you so excited
Once I’ve tasted your milky way
Girl spend the night come take a flight with me
Out into space

Girl you’re sending me these sexual energies
And i gotta grab it
Right now I’ve gotta have it
Shooting stars, a trip to Mars
I can get us there from where we are
So don’t trip i got a giant rocket
Glidin through just hitting your pocket

Chorus:
Sex planet
Come fly away with me
Right in my ecstacy
Out in the galaxy
Sex planet
Get ready for take off babe(hmmm)
Have a safe trip babe

Chorus:
Sex planet
Come fly away with me
Right in my ecstasy
Out in the galaxy
Sex planet
Get ready for take off babe(hmmm)
Have a safe trip babe

Chorus: (2x)
Sex planet
Come fly away with me
Right in my ecstasy
Out in the galaxy
Sex planet
Get ready for take off babe(hmmm)
Have a safe trip babe