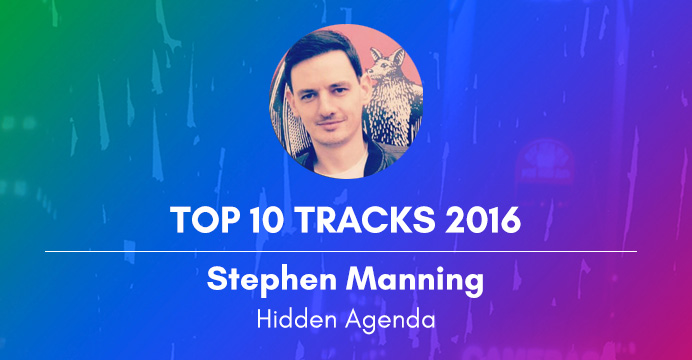 Stephen Manning is a booker, promoter and DJ with Hidden Agenda club who book fine regular nights of electronic acts of both local and international, mainly in Wah Wah Club and District 8. Hidden Agena also booked stages at Metropolis Festival and Forbidden Fruit. This is his latest mix.

From his new album Sirens and this was the standout track for me. Whether it’s solo or as Darkside, he always delivers. It was toss up between this track or ‘Three Sides of Nazareth’. Looking forward to seeing the next live show, he is always unreal. Darkside is in my top 3 Hidden Agenda gigs of all time.

Worth the wait and I love the haunting strings on this. I actually became a Radiohead fan by default as a 15 year old when my mam went into the Record Sleeve in Navan to get me a birthday present and said ‘my son loves music what do you recommend?’ and he gave her The Bends album. So thanks Mam and Record Sleeve guy, otherwise Id still be listening to the Prodigy.

This guy can do no wrong. His Dekmantel set was awesome and this track is a belter. I am a sucker for piano riffs and Moroder baselines and ‘Cloud City’ delivers on both counts. I supported him earlier in the year at the Button Factory and was in full fan boy mode which probably freaked him out. I nearly left him off the list as he scratched my last record when he took it off the turntable.

Criminally underrated producer who is destined for big things. This song is from the album Rojus and has been played at 90% of Hidden Agenda gigs this year, DJ Deece plays this on repeat. Rojus is the lithuanian word for ‘paradise’. You learn something new every day eh?

Most hip-hop gigs are shite but Q-Tip is one of the exceptions to the rule and his Dublin gig in 2009 is easily one of the most memorable gigs I was ever at. I was definitely sceptical that the new album would be of any use but thankfully it’s ace. It cements their status as greatest hip-hop band ever.

I caught Kurt Vile at Body & Soul a few years ago and became an instant fan. This song is lush and who doesn’t love a good duet?

This gets better with every listen. Futuristic jazz from a true genius and this track from the album of the same name adds to his incredible legacy. A man with more styles than Peter Marks.

High energy fist pumper from the versatile Midland. I have played this at festivals and clubs and it never fails. Guaranteed taps aff. It takes a lot for me to buy a track on vinyl these days but I shelled out for this gem.

Pure dance floor heat, hotter than a McDonalds apple pie. Every time someone plays this I ask what it is and then remember that I bought it. Sounds great when played LOUD.

One of my favourite producers and this track has a baseline to die for. His recent album (Love Songs Part 2) has lots of blues and jazz samples and flows really. Was raging I missed his recent set in Wah Wah Club.