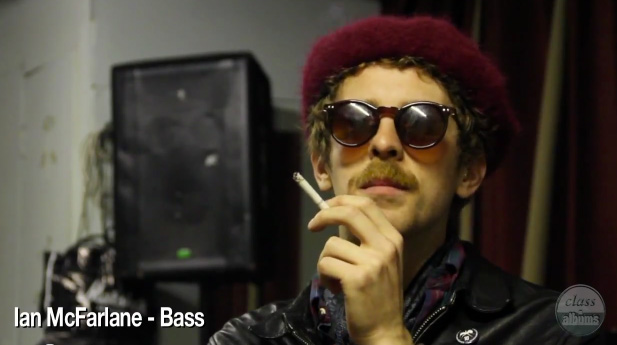 Album of the month: Twin Sister – In Heaven

Squarehead and Patrick Kelleher reconvene years later for an episode of the fake behind-the-music documentary series Class Albums to discuss the recording process of their 2011 split 7″ – ‘Just a Tragedy/Attention to Detail’. It was directed by Rupert from Bats. The real single and launch info is after the jump.

Choice quote (there are many):

“If I had to compare my bass tone to an animal it would be some sort of exotic cat.”

“We were the first Irish artist to use the word “breast” in a song. Of course, this was 2011 so it caused a lot of controversy at the time.”

“I’ve got a lot of ladies of the night…. who visit me during the day.”

‘Just a Tragedy/Attention to Detail’ is released on 7″ on October 28th through Popical Island. ‘Just A Tragedy’ was written and sung by Patrick Kelleher and ‘Attention To Detail’ was written and sung by Roy Duffy from Squarehead. Both tracks were performed, collaboratively, by Squarehead and Kelleher. It was mixed by Fiachra McCarthy of Pantone247.

The limited vinyl release will be released at a gig in the Grand Social on Friday October 28th with sets from both acts. Afterwards, selected record stores, including Tower, RAGE and HMV Grafton St. in Dublin, Plugd in Cork and the Bell Book & Candle in Galway will stock it. It will not be available as a download.

An online listening party happens on Wednesday afternoon at www.mumuplayer.com/popical_island.