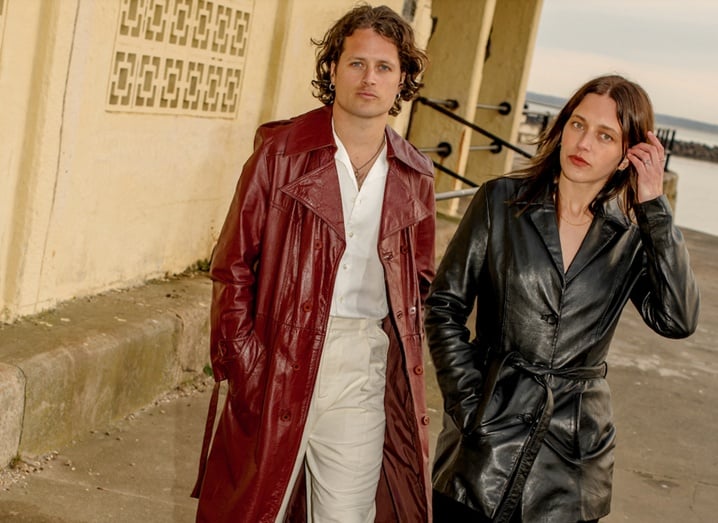 
The Limerick/London duo of Whenyoung, Aoife Power and Andrew Flood, have already shared two songs from their forthcoming album Paragon Songs out 7th April with ‘A Little Piece Of Heaven’, ‘Unchained‘ and ‘The Laundress’, two songs which marked a different sounds for the band.

New song’ Shame Train’ arrives today with a similar textured vibe, it’s very clearly not the same band who arrived back in 2017. Sporting a dark electronic mood, ‘Shame Train’ examines the litany of societal shaming that becomes more readily apparent when someone breaks out of the norm, or moves out of a coveted age bracket.

“I was deep in songwriting and self development, trying to overcome anxieties and complexes when I began to understand about shame as a traumatic emotion which affects everyone. Whether we’re aware of it or not, we’re made to fit into a mould and if we don’t, we’re shamed. There’s shame of aging, socio-economic status, religion, sex, image, the list is endless. This is the first song we recorded for the album and the theme of self love and respect, evident throughout the tracks, really evolved from this song.”

“We filmed the video for Shame Train in the empty, derelict hull of the Ramsgate Arts Barge in Ramsgate Harbour with director, Luke Ogden and the help of some friends. We got in there just before the ship was to be refurbished as a community arts space. The exposed walls and beams were reminiscent of a freight train on the tracks and the feel of the space really married with the song. We made an energetic performance piece within the dark, rusty space while bobbing to and fro on the tide and with Aoife wearing a contrasting white Simone Rocha dress.”

New album Paragon Songs is an exploratory journey through the dark depths of self-criticism, rises into an ambition for change and a desire to welcome healing and self-love – it’s a self-help and rite of passage album. It was written between a cottage in County Clare on the West coast of Ireland, and in a flat on a street called Paragon on the East coast of England.

It begins in the pain of an old narrative, arcs in the possibility of change and resolves in intention. Aoife elaborates, “Every step is a new time in your existence and noting it down marks it, celebrates it and reveals you to yourself. These lyrics represent who I am right now or who I’ve been the past year or two. My intention is to like myself and be kinder to myself. And so I can only present myself in the state that I am currently in which is healing not healed”