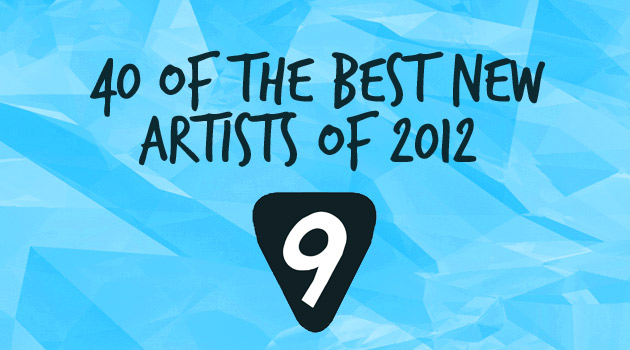 Ending the four part series this week, in which various artists, media and music fans I trust answer the question: “What are your five best new musical discoveries of the year?” Their answers were then rummaged through by me and I picked a cross-section list of 40 of the most interesting, diverse new artists, in no particular order, from their choices.

Los Angeles appears to be having a post-Foster the People moment of late with a slew of great acts playing lush pop coming to our attention from out there including The Neighbourhood, NO, Sr Sly and Wildcat! Wildcat! We dig Haim most of all, three sisters whose releases to date show they have a sure touch when it comes to an alluring mix of rock, pop and old-school r’n’b. Live, they’re a lot more unruly with the sparkling harmonies and infectious melodies getting amped up to 11. (Jim Carroll)

As eye-rolly as No Ceremony/// might appear, what with the three forward slashes and the mononym song titles, this group of Manchester mysterons have been more successful, and less feigned, than most with their secret-selves ambition. It all started with ‘Hurtlove’ a piano led 4/4 banger with a classic groove, twisted vocals wrapped in static fuzz, chops and loops, eventually crying: “I love the way you never stop.” Thankfully they haven’t. ‘Wearme’ is cut from the same cloth. They threw a curveball with ‘Deliverus’ – a plucked guitar, hollowed rhythmed, swirling indie ballad – and ‘Heartbreaker’ joined the dots. Omnipresent are traces of dissonant electronic ambiance, a dissonance that carries an implication of doom but something they manage to do harmoniously: plaintive melodies clashing off a subvert of acoustic and electric guitars and charged electro over house-informed dance rhythms. Their newest track, ‘FeelSoLow’, is a soaring, cacophonous ballad. It’d be gloomy, only it’s too glorious to be so. Up until recently, each tune came with an abstract video – swinging light bulbs, that kind of thing – with ‘FeelSoLow’ there’s a marked pauses as further light is shed on the trio: Audrey, Kelly and Jamie if you must know. (Alan Reilly)

This is a band I have been recommending solely on the strength of one song. After only one listen of ‘A Thought, A Mind’ it painted its name on the walls of my mind and made clear its intention never to leave. If there’s a musical equivalent of love at first sight, this was it. It’s made by people living in different places, and it sounds like a dozen old worlds rolled into one, blown along in a blustery breeze, leaves of different trees all turned the same quiet shade of gold. I expect more great things from them, but this is already enough. (Shane Culloty)

There’s a delicate determination to Lucy Rose Parton’s lissom songs; despite her fragile, husky, Feist-reminiscent vocals framing an assortment of romantic wounds, there’s a steely, clenched-fist fortitude to her debut, Like I Used To. Best known for her lengthy collaboration with Bombay Bicycle Club, in the studio and on tour, Lucy Rose shares Jack Steadman’s knack for thoughtful, intricate songwriting and a habit of hesitant, pleading phrasing, but she’s a more candid lyricist. The gorgeous ‘Night Bus’ — which is London’s answer to Gemma Hayes’ ‘4:35am’ — and the hands-off-the-handlebars freedom of ‘Bikes’ are highlights of an album that often feels like an intimate, early morning conversation, pricked with emotional scars and recriminations. Like I Used To is a beautiful introduction to a young artist with enormous promise and heart. (Kara Manning)

As the story goes, Hundred Waters grew out of Steven “Levek” Levesque’s backing band. It’s impressive that the two parties would deliver two of the year’s most interesting albums. Like his fellow Floridians, Levek also defies the terroir of his home state, eschewing palm trees and Jimmy Buffet for an album of songs that traverse English psych-folk, American indie and even a dash of Brazilian bossa. What makes said songs so cohesive, however, is a remarkable sense of intimacy. These are bedroom recordings that were afforded the luxury of a few sneaky nights in a nearby “proper” recording studio. The songs tell a story (best for you to uncover yourself) while the album begs for a nice pair of headphones in the daylight hours, or a quiet, candlelit room at night. (Dev Sherlock)

Miaoux Miaoux is 26-year-old based producer Julian Corrie, who has been knocking out tunes as a remixer and producer for a few years now. This year saw him release his first album proper, Light of the North. Miaoux Miaoux makes spacey electronica with indie and post-rock leanings, fluid and uplifting, these sounds evoke moods a million miles from dreary rain soaked city of its birth. Light of the North is a delicately weaved patchwork of beats, synths and guitars, with his pristine vocals gliding through a heavenly mist of lush harmonies, melodies and electronics. It may recall some of the finer points of Caribou, Hot Chip or Jape, but it has a groove all of its very own. (Barry Gruff)

From: Finland.
Chosen by: Daniel Harrison.

A producer whose hypnotic music stems partly from a wish to capture the ‘sense of movement at different simultaneous speeds’recalled from childhood train journeys. The Isolated Rhythms Of..., his debut album on Uncharted Audio, is an absorbing listen wherein familiar elements (Detroit techno, IDM, Reich) are subsumed into something genuinely unique and subtly shifting. Lengthy loop-based passages have an ambient feel that belie their complexity, while the euphoric swell of ‘Haukivesi Spirit’ is a particular highlight. Also recommended are the Spatia and Erriapo EPs, and an inventive mix for No Pain In Pop that re-imagined Detroit classics through an ‘alternative reality’ (Daniel Harrison)

There’s a freshness about Joey Bada$$ that’s been missing for quite a while. Part of New York crew, Pro Era, Joey delivers raw no-nonsense hip-hop without the need for choruses provided by hired pop songstrels. His songs aren’t a list of fancy things he owns. His videos don’t feature women shaking their bits and bobs at the ‘untouchable rap star’. The irony is that it takes a high-school youngster leaning heavily on 90’s hip-hop to make it exciting again. Where Odd Future arrived with a tornado of attitude but a lack of tunes to back it up, the two mixtapes Joey unleashed this year (1999 and Rejex) prove that this kid is the real deal. Roll on the debut album… (Shane Galvin)

Beat producer Barry Gordon aka Sina is probably the most overlooked producer in Ireland at the minute. He recently released an EP on Berlin’s Project Mooncircle called From Love to Dust which was three super chilled beats and three remixes. The stand out track being ‘Remembrance’ which has an equally brilliant video to go along with it. I’d highly recommend checking out the EP and his Soundcloud for his newer productions, it seems he’s building up quite an international fan base, hopefully in the next while Ireland notices him more too. Don’t sleep on this. (Matt Agnew)

The fastest rising electronic producer of the moment thanks to the stonking ‘Harlem Shake’, is Baauer. He’s been described as future-crunk, trap, dubstep, bass music and more but one thing’s for sure, his tunes is sending audiences into a crazed tizzy. oh, and Twisted Pepper have just announced he’s playing here on December 5th. (Nialler9)