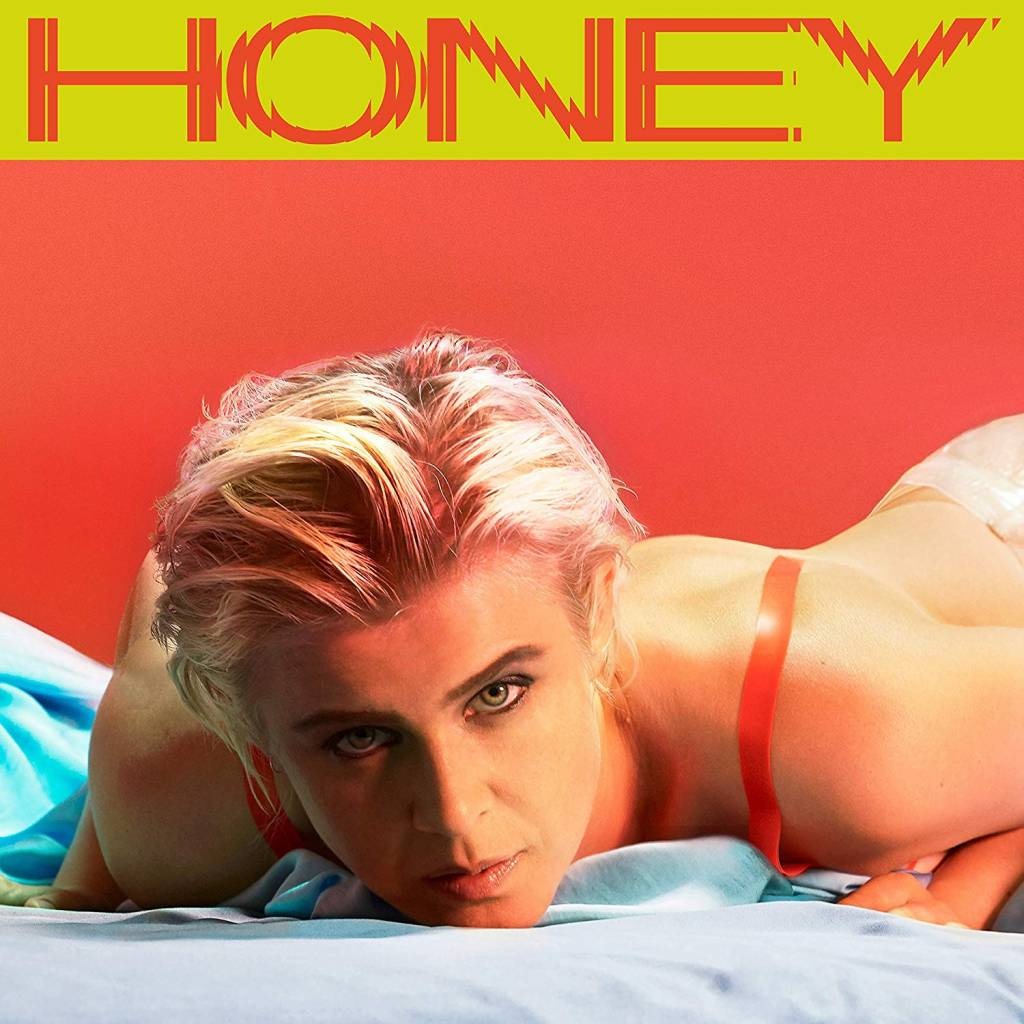 Robyn’s first album in eight years isn’t as pure and pop as the Swedish singer is known for. Honey is a melancholic record that largely skirts around corporeal pleasures of her past music for explorations of loss and grief. The album is fully informed by the passing of her frequent collaborator Christian Falk and as such there is a sombre and delicate thread throughout. This being Robyn, the productions are house, disco and electro-informed but more muted than before. This is Robyn, feeling different types of humanity and sharing it. She offers herself and others solace. Sometimes it’s unrealistic optimism like on ‘Ever Again’ where she promises herself never to feel heartbreak again and sometimes it’s open-hearted like on on ‘Missing U’ – “this is empty space you left behind / now you’re not here with me,” she sings while cascading synth notes fall around her – an armour against pain. “Because it’s in the music / Yeah, we were dancing to it / I’m right back in that moment / And it makes me want to cry,” she sings on ‘Because It’s In The Music’, encapsulating Robyn’s ability to make moving music out of the music of movement.

A sprawling beauty of an album from composer and musician Nils Frahm. All Melody was recorded in his studio in his custom-built studio in Funkhaus in Berlin which took advantage of reverb chambers and the space of the old place along with contributions from other musicians gives the album an endlessly exploratory feel and at 75 minutes that’s what it needs. It moves between ambient, classical and electronic, and the lines are increasingly smudged of those archetypes. It’s Frahm embracing possibilities in his compositions while still maintaining his own sonic imprint. 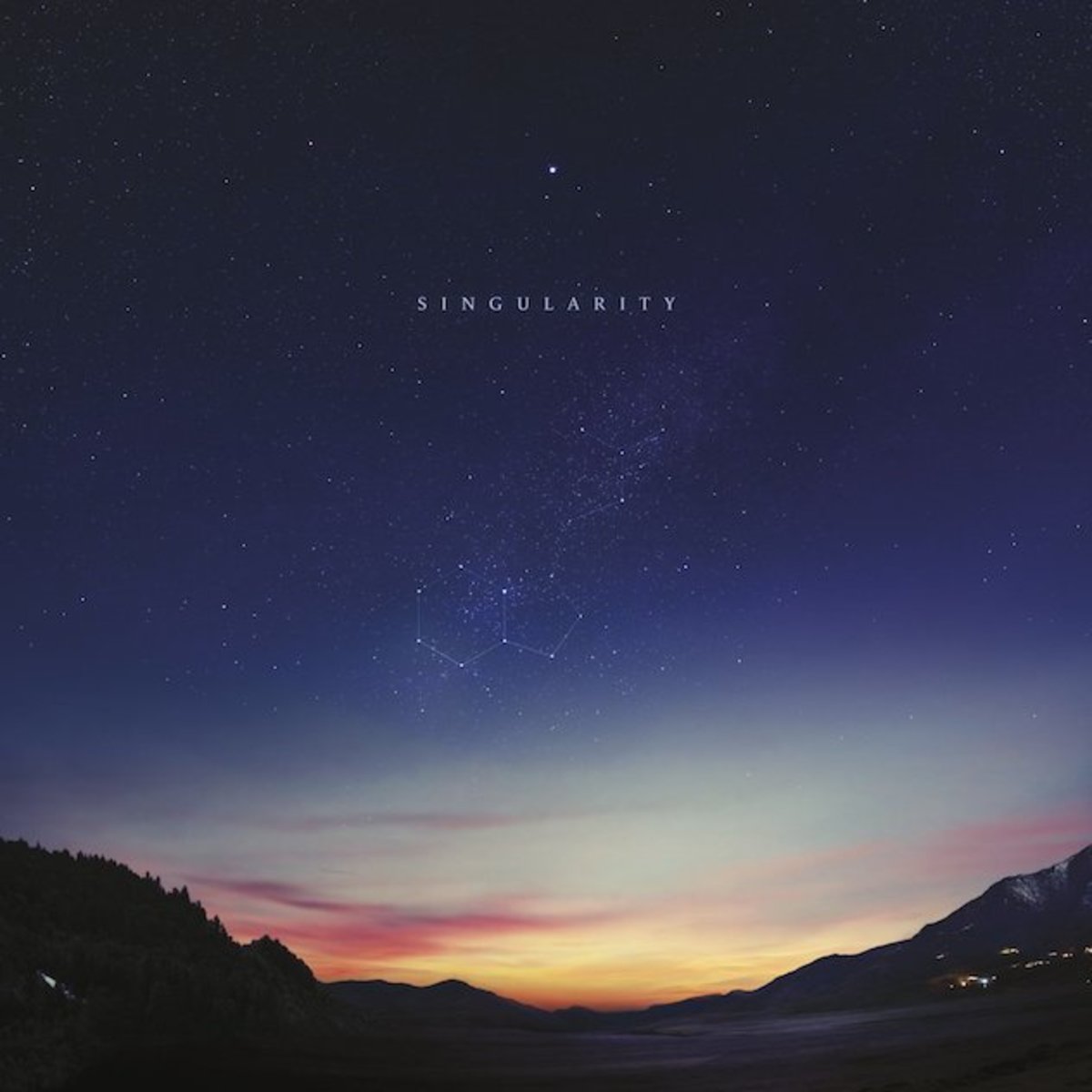 While the English producer and composer’s breakthrough fourth release Immunity was largely viewed as a new lease of life for experimental dance music, many expected it’s follow up to fall somewhere closer to the dance side of affairs. Hopkins has delved deeper into experimental synth sounds and grainy textures with Singularity while also making some of the most gargantuan music of his career. The obvious dancefloor fillers are still here but imbued with a dogged introspection. Hopkins has cited the influence of meditation and his interest in transcendentalism as a driving force behind the creation of this record. Singularity burns brightly and with a complex rolls of patterns over each track. While many of the sounds are epic and fitting for dancing (which Hopkins is well able to turn on live), there’s a pursuit of a sonic envelopment throughout that suggests Hopkins is seeking something deeper. 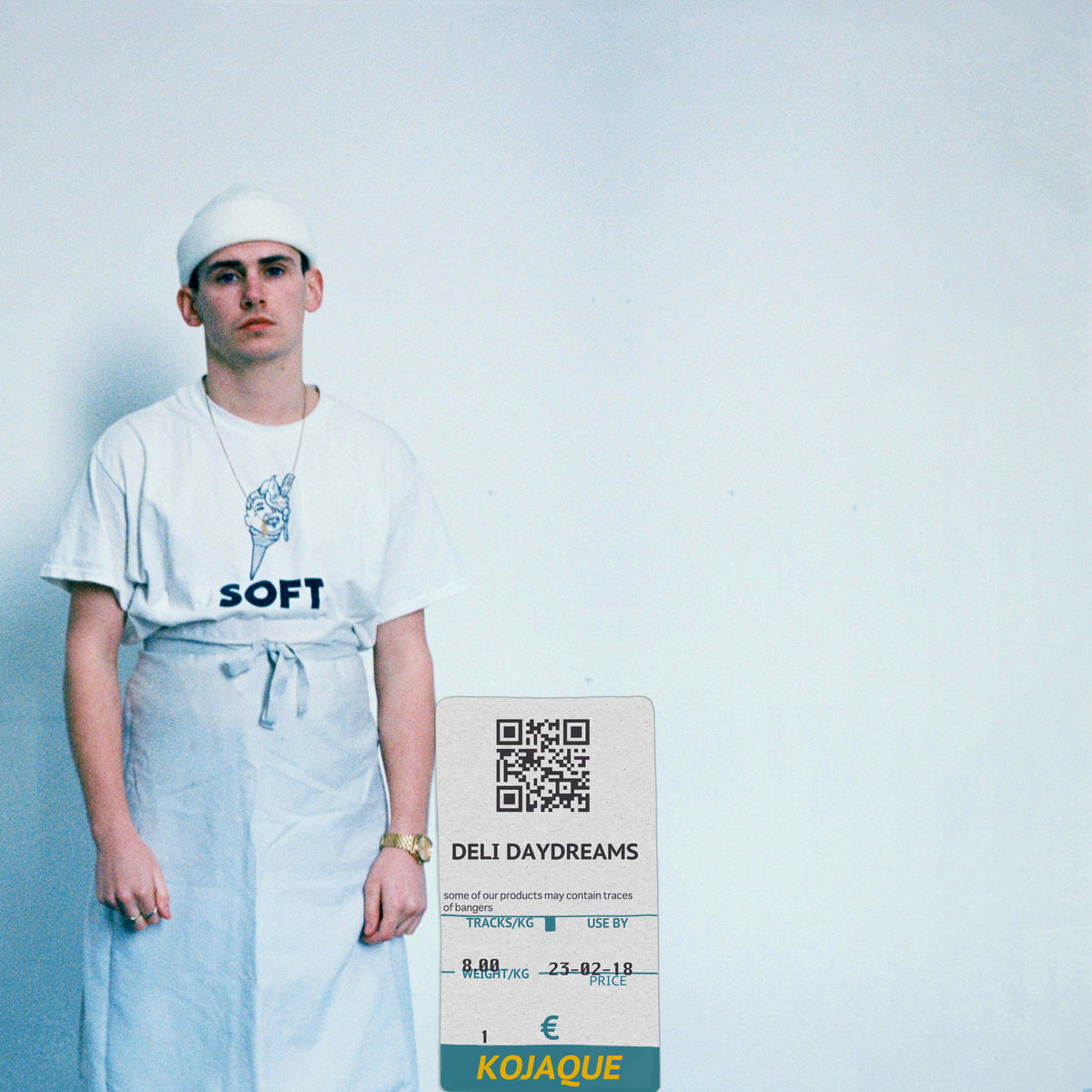 On Deli Daydreams, Dublin rapper Kojaque puts aside false bravado and instead offers a valuable insight into the psyche of the artist, as vulnerable as he is angry. The album skilfully avoids being overtly conceptual, being originally billed as the chronicle of the deli worker. Instead, Kojaque uses references to his working life in order to reflect how he and others view himself, most notably in ‘Love and Braggadocio’, “See I could love myself I’m just not there yet, they still make me rock a hairnet at the deli in fairness”. In many ways the underlying theme throughout the album seems to really be that of acceptance, both internal and external. – Luke Sharkey

Dev Hyne’s fourth studio album as Blood Orange is a personal project Negro Swan is a thematically concerned with issues of identity, specifically racial identity, but also with mental health, namely depression and alienation. The album’s sample of spoken word and conversations highlight the theme of acceptance in society and of the self – from people as diverse from P Diddy to writer Janet Mock. Hynes presents his unfiltered self including his fears and ambitions amongst them, from being bullied as a child to the self-acceptance of the title track. Musically, the album continues the vein of ’80s R&B that last album Freetown Sound embodied with warm synths, drum machines, jazz sax, NYC ambient street noise and sinewy guitar. Negro Swan is an album which exists in the modern racial and social ecology alongside the artist that created it.

Chicago MC Noname’s second LP finds her ascending into the highest ranks of hip-hop expression with a stunning release of jazz and gospel lo-fi hip-hop in the style of local trailblazing hero Chance The Rapper. Backed by a full band, and produced by Phoelix, Noname’s poetry are given soft focus and are as much spoken word as rap-influenced. Her conversational style is laid-back and relatable and jazz-inflected. She may endearingly laugh or break to adlib but weighty topics like the stereotype of black America, grief, politics, religion and sex. Noname explores those big issues with small moments, good grace and fresh insight.

Pusha T had taken a leave of absence from music over the past few years, opting instead to focus on his role as president of G.O.O.D. Music. Daytona is his first full length studio release since 2015’s King Push, a record which while promising in spots, failed to deliver on Pusha’s full potential as a solo artist.

On Daytona, Push pairs up with label partner Kanye West to prove he’s still one of the most vital creative forces in hip-hop. There’s genuine chemistry between Ye’s instrumentals and Pusha’s lyrics, something which lacked in his previous releases. There’s an underlying energy to the record that’s palpable, Push delivers his lines like it’s do or die. Coming in at just over twenty minutes, Daytona compensates for its brevity with content that never stops reminding you why Push is one of the best to pick up a mic. – Luke Sharkey.

Chris Davids and Liam Ivory’s second full-length LP as Maribou State was the kind of record that was a comfort to listen to. It’s not challenging, it hasn’t got much to say about the world, instead it’s an escapist album of worldly sounds, inspired by the duo’s touring in Asia, Morocco, America and India among other places. Kingdoms In Colour is a wanderlust – guests like Holly Walker, Khruangbin, North Downs contribute edifiying hook-filled vocals that augment the album’s defacto electronic and organic instrumentation mix, much like the expansive and beautiful music of Bonobo. Kingdoms In Colour is an album that pits stirring Indian-style strings against gentle club beats, and guitars against hook-filled melodies. It was an album that lifted me many times this year, and for that reason and its return value, it is high on this list. 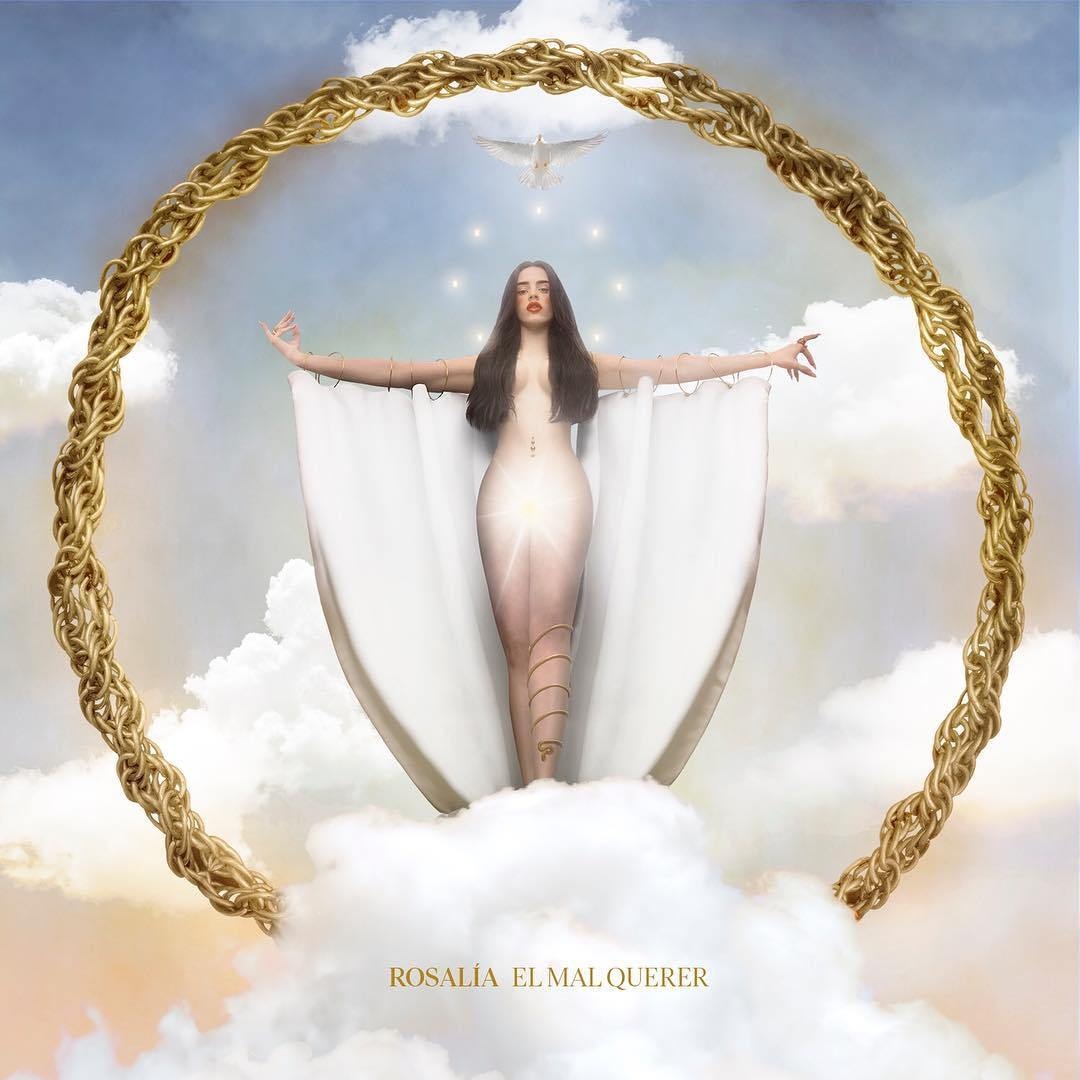 Flamenco music isn’t recognised globally for its contemporary releases, but Rosalía Vila isn’t any ordinary artist. The Spanish singer brought a brutalist intensity to her performances of an old art form on her 2017 debut album Los Angeles. The album featured fingerpicked nylon guitar by Raül Refree that was as much of an emotionally-charged whirlwind as Rosalía herself, darting from quiet minimal moments to high passion with a beautiful fresh voice that made her a star in Spain and put flamenco on a world stage, in a way it hasn’t been for a long time.

Except, that story isn’t going to be written. Rosalía hasn’t ditched the genre by any stretch but the 25-year-old has increased her scope and vision to take on R&B and pop sounds that were totally absent in her work so far on her storming 2018 album El Mal Querer. With it, she confirms a global star in the making who fashions a new contemporary pop style inspired by a thirteenth century novel about a woman imprisoned by her jealous fiancé.

El Mal Querer is a thrilling blend of handclap-assisted high-drama flamenco music, huge tightrope-walking vibrato and a rhythmic vitality that allows the sound of revving engines to be used in a song. Production comes from El Guincho, a Barcelona electronic producer who brings a hip-hop beat modernity to these songs. Justin Timberlake gave his blessing for ‘Cry Me A River’ to be used on ‘Bagdad’ and the visual accompaniments for ‘Malamente’ and ‘Pienso En Tu Mirá’ by the keenly talented Canada were easily among the best of the year. Rosalia’s vocals transcends any language barrier and El Mal Querer is a groundbreaking twist on an ancient form.

Curated artist soundtracks are a relatively new strange beasts in the world of music. More a marketing tie-in or a way to shoehorn an artist into the campaign of a movie (Lorde with Hunger Games comes to mind) but of course, anything involving Kendrick Lamar has to ability to transcend a smart business move. Sure, Kendrick has done some calculated guest verses in his career but the Black Panther Album, less a soundtrack, more an album “Music From And Inspired By” has a connection to the source material but uses it as a starting inspiration point.

The Marvel studio and the film’s director Ryan Coogler gave Lamar and Top Dawg CEO Anthony “Top Dawg” Tiffith carte blanche to bring a huge cast of rappers and singers to the table. Their are familar names: Anderson .Paak, 2Chainz, James Blake, Vince Staples, Ab-Soul, Jay Rock, Future, The Weeknd, Khalid, Jorja Smith and then there are relative newcomers drawn from South Africa like Babes Wodumo, Yugen Blakrok and Sjava who ably match their American peers and in the process, reflect the Wakanda heritage storyline of the film. What ties the soundtrack together is Kendrick’s and lyrical sensibilities exploring black identity along with tribal vocal samples of the Wakandan singers. Lamar is all over the album, even if he’s not listed as featured. Black Panther The Album is a landmark release, with nods to the film’s plot dotted among its lyrics. It transcends the tie-in by becoming an inspirational collection of music that mines Black Panther’s black superhero and African heritage themes for an epochal cultural response.