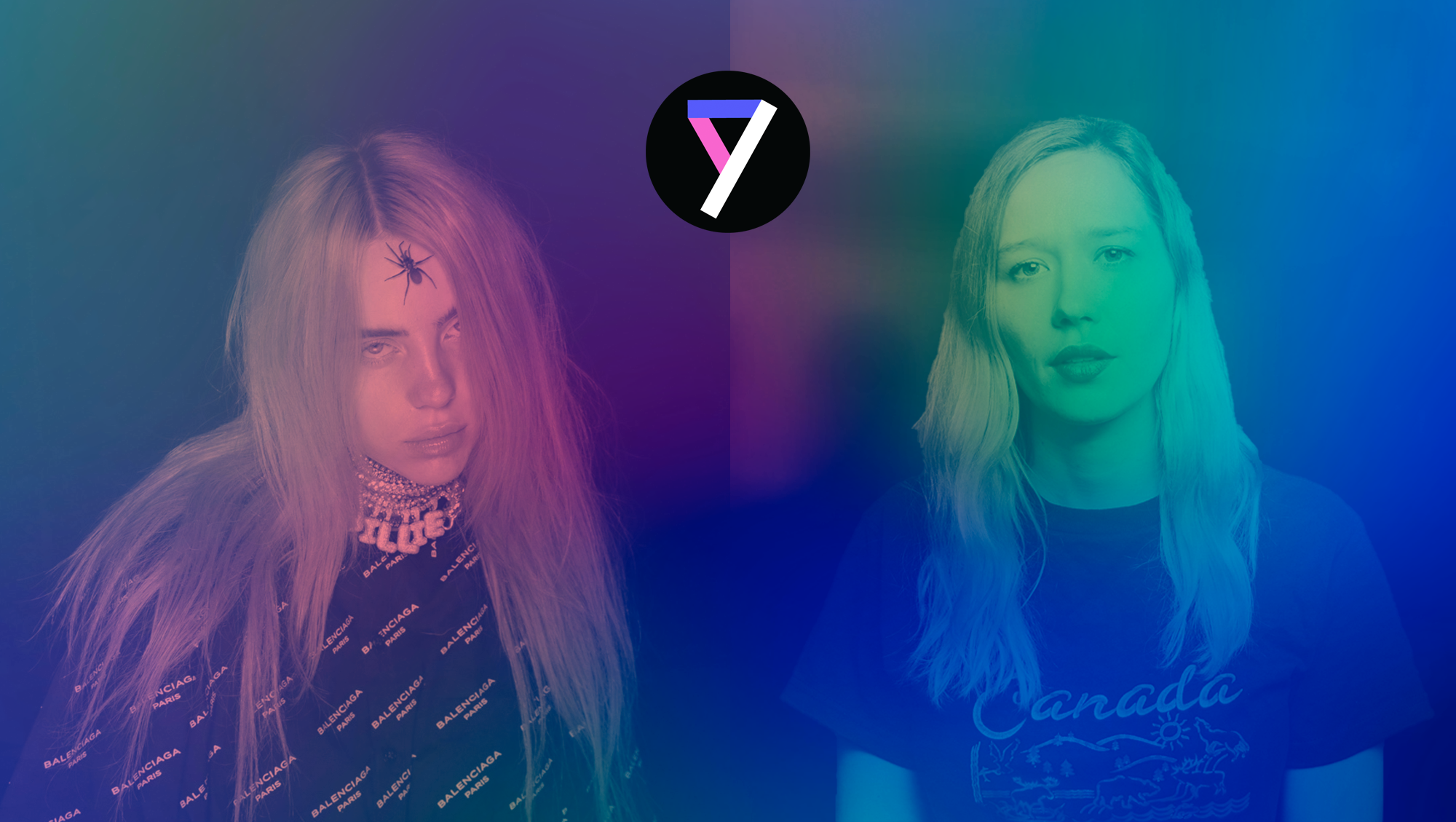 17-year-old Billie Eilish goes dark on the standout ‘Bury A Friend’. The track has a distinct underground hip-hop influence with the vocals half-rapped and the beat borrowing plenty from an industrial sound palette. Perhaps Eilish has been listening to Yeezus. Yet, Eilish’s pop origins remain visible for all. The eerie chorus line is the perfect catchy counterbalance to some of the more abrasive instrumental parts of the track. According to the artist, the track is written from the perspective of the monster under Eilish’s bed. Commenting on her own Genius page, she states “It inspired what the album is about. “bury a friend” is literally from the perspective of the monster under my bed. If you put yourself in that mindset, what is this creature doing or feeling?”.

‘Headroom’ is one of the best tracks that we’ve heard in a long time. It’s the first track we’ve heard from Skinner since 2016’s album Skint and we’re glad he’s back. This track is a semi-autobiographical account about excuses and avoidance that sees the 22-year old discuss the lengths people will go to mask their true emotions. He does this through some pretty gruesome imagery, “paranoid, run my hands through my hair, blood stained vomit and phlegm on the chair, asking ever tie why the time won’t fly by, cause I’m a nice guy – I live a nice lie”. Grungy guitar lines meet thrashing drums complimented by his quirky, accented vocal melodies.

The Dublin-based club night Sim Simma has branched out into original music that encapsulates their interests of dancehall, hip-hop and grime. The five tracks on the Pass The Aux Cord EP give new voices a chance to shine with great productions from Ben Bix and Semi-D. Man Like Me charges ahead with high-tempo percussive swing and sub-bass while Limerick-based MCs Denise Chaila and God Knows bring a thrilling energy to proceedings.

Kojaque was busy last week celebrating the one year anniversary of Deli Daydreams with a sold-out show in Whelans as well as releasing his first single of the year ‘Flu Shot’. The track shows the rapper doing what he does best with quirky rhymes and rhythms in between brass combo tones and melodies that are fast becoming his signature. The accompanying music video is superb, featuring Kojaque alongside some of his Soft Boy comrades including Kean Kavanagh and Wastefellow in a musical production-esque setting that starts off on the familiar surroundings of a Dublin Bus and ends on a brightly lit stage.

Don’t Know How To Keep Loving You

Julia Jacklin‘s new album Crushing saw release last month and while any song from it could merit a spot on this list, ‘Don’t Know How To Keep Loving You’ feels really special. The track is chillingly honest with Jacklin acknowledging the confinements that come with the comforts of long term love and the trappings and limitations it can place on you as an individual, “don’t know how to keep loving you, now that I know you so well.” It’s a soul-bearing song and a true high-point of the album.

Having made one of the albums of 2018 by embracing 15 songs in 15 minutes, the Philadelphia’s new single is a novelty at four minutes running time but loses none of the off-kilter charm that made her a going concern. Only Child is a song that draws from rap, R&B, lullabies and pop, features the hook “You must be the only child because you’re so stingy,” and doesn’t fit into any singular category. Four minutes doesn’t feel enough.

Roy Of The Ravers

My highlight from the Roy Of The Raver’s latest release is ‘1999’ a slow-rolling acid romp that builds and builds into an almost euphoric French house synth rush to match its 13-minute running time. Epic.

Fehdah’s ‘Saharakungoh’ is a glamorous blend of house and afro-soul. Self-produced and arranged herself, the track demonstrates how much her talents as a producer have evolved since we last heard from her in 2017. There are new electronic elements there in the trapped high-hats and jittery synths but there are also traces of earlier material in the tight backing vocals and melodies; it feels like a real fusion of a mix of styles and influences, past and present. Her new EP is due for release later this year and we can’t wait to hear it.

Jessie Ware is at her best when flexing her soulful voice against lush dance arrangements. ‘Adore You’ co-produced by Joseph Mount is on the softer end of that spectrum.

Mango X Mathman’s first track of the year is here with ‘No Surrender F.M.’. The duo have been hard at work as of late finishing up their debut album, Casual Work, due out later this year. ‘No Surrender F.M.’ isn’t an album cut, but it’s a pirate radio-inspired banger that works on its own terms, call-ins and all.

No. 1 Symbol Of Peace

The latest single from Irish duo Tebi Rex is their strongest yet. It’s a song that’s buttressed on a deep bassline and trap production that is about how “most bad people don’t see themselves as bad people”. That is to say, that the subject of the song is about people who craft their own narrative in the image they want to be seen as. Catch them at Dublin Is Sound in April.

‘Just My Luck’ is the latest single from Dublin based artist Nealo. The track was written from the perspective of someone losing their partner because of alcohol use, and Nealo’s vocals come through with so much in the way of warmth and clarity in that light. The instrumental was written and recorded by Irish instrumental group INNRSPACE (comprised of Uly, Fiachra Kinder and Adam Garrett) and it is pure smooth nu-R&B cut. The lyrics stand out as having a real human edge and a universality working in tandem with his narrative style, and Molly Sterling’s vocals add a real undercurrent of intimacy to that.

Cuz I Love You

‘Cuz I Love You’ is the second and title track taken from Lizzo‘s upcoming album due out in April, following last month’s ‘Juice‘. It’s a belter from the get go with Lizzo showcasing prolific vocals and a big band Motown sound. The music video has a sure Hollywood glamour to it and sees the singer at a church altar surrounded by men crying into the camera. We’re here for it.

Since the English musician Steven Wilkinsons joined Warp Records’ roster, he has released consistently superior music, whether it’s the beat-chopped beauty of 2009’s Ambivalence Avenue or the soulful funk and the soft-focus folktronica of recent releases. ‘Curl’, a single from his forthcoming album Ribbons is in the latter camp, a comforting lilt that harks to a calming pastoral walk.

Gough’s ‘Breakfast’ boasts lo-fi hip-hop beats and electronic brass lines, complemented by Gough’s hook-filled rhymes, “bridges to burn, tables to turn, work hard while you’re young till’ you crash and you burn”. His voice is deep and smooth and is contrasted completely by the syncopated bass line rhythms. The whole song is dripping in confidence.

The track’s genesis was a hook written on a bus home from Longitude in 2016, later rediscovered and repurposed with bouncy, groovy production and we’re glad it got this second lease of life.

Irish electronic music has been united in North and South in its international breakthrough status over the last few years as names like Bicep, New Jackson, Krystal Klear and Or:la are among the brightest names in dance music. Not far behind is Hammer, the Belfast producer Rory Hamilton who has been quietly releasing quality roving house music with melodic intent. ‘L’Orange’ is his latest peak.

Our favourite from Broken Social Scene’s latest EP Let’s Try The After. ‘Boyfriends’ is lush with the upbeat indie guitar riffs and romanticism that made the group popular to begin with.

Spiritually, ‘Aruba’ picks up where Royal Yellow’s last single, ‘Hazeldene’, left off. O’Brien alternates lush vintage sounds, like the wind/strings samples in song’s chorus, with swung hip-hop grooves in the verse sections. Sweet played against hot. The same contrast is spun out in O’Brien’s vocal delivery. At first taut and tense, gradually becoming softer and sweeter. By the time the chorus rolls around O’Brien’s soprano delivery is almost whispered, lingering in the high end of the mix. It’s between these two worlds, gramophone nostalgia and lo-fi hip-hop, that Royal Yellow’s music thrives.

It’s been three years since ELLLL released her EP Romance and the Cork native is finally back with some new music. ‘Febreeze‘ opens with sounds of tweeting birds before they’re joined by a rising bass line and analogue synths. The Cork hailing producer is now based in Berlin and this release is accompanied by a a G.E.O. remix that we like a lot too.

Former Ratking rapper came back with a once-off track, and ‘Cheat Code’ exemplifies Wiki’s style, with its 8-bit ripples and dense atmosphere, Wiki adds to the city’s underground rap credentials.

One of the slower burner’s from Eoin French’s second LP. ‘On & On’ is our pick purely because of how close it gets you to French’s own vocals. As grandious as Far Out Dust is sonically, it’s impossible to forget just how good a singer Talos’ frontman is underneath all the production.

The newest track from the DJs and producers set to boss Body & Soul this year. ‘Who’ brings in Estonian ‘winaloto’ rapper Tommy Cash to make it really weird. What we get is an aggressive club track that the Germans are known for about artifice and ego modern life wallows in. It’s genius, we just can’t decide if the video is too, or if it’s one step on the wrong side of gross.

‘Build A Bridge’ is the latest of a string of singles from All Tvvins’ upcoming album Just To Exist, co-produced by James Vincent McMorrow. The songs we’ve heard so far indicate that the band have made a shift from stadium-rock-indebted sounds to a more idiosyncratic electronic pop/rock style and this track is no different; it’s infused with intricate percussion rhythms but its true merits lie in the lyrics, “I build a bridge right over to you, just for the view” and in the choppy vocal sample cut-ups in the tag.

“Bus stop ballads of the last fuck”. Palm knows how to write a line that sticks with you.

Band Tips #1: Getting off the starting blocks with music