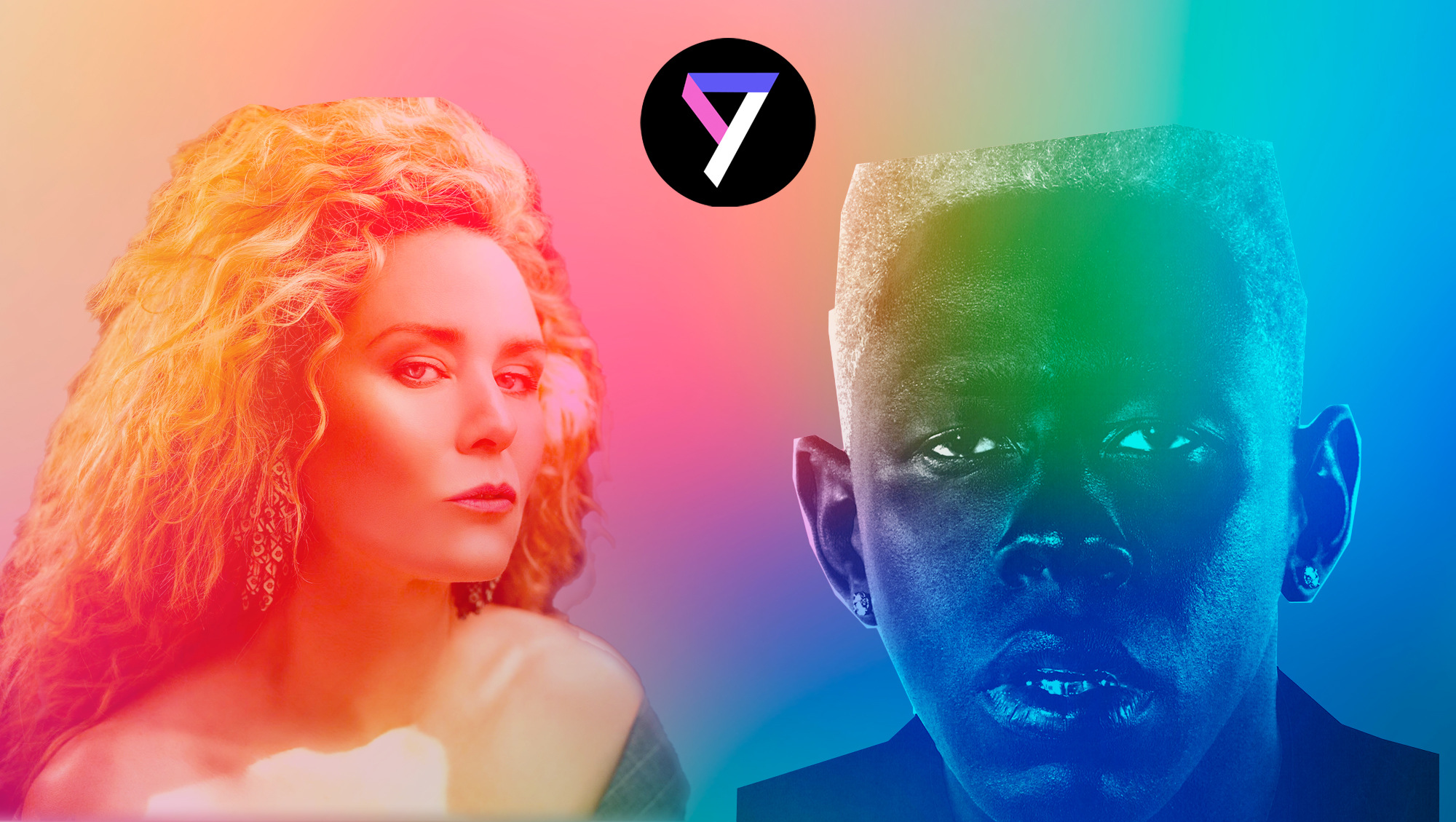 Caribou’s Dan Snaith returns to his markedly funkier side hustle with Sizzling EP, his first release since 2017. Lead single ‘SIZZLING’ reworks Paradise’s 1981 disco floorfiller “Sizzling Hot’ for a new audience with pitched-up vocals and a constant wall of shimmering synth work and a deeply infectious bassline. An early anthem for the summer.

Girl Band‘s ‘Shoulderblades’ is six minutes of blistering noise that begins as if both the instruments and the voice of Dara Kiely coiling and warming up for release. Once it kicks into focus around the 90 second mark with a beat, the band’s trademark scraping guitar and Kiely bringing it towards a beat drop after two minutes before paring back to percussion and Kiely singing about 90s chat show host Ricki Lake and cans of Dutch Gold in his stream-of-consciousness fashion. From there, a strident and hypnotic low-end takes over and it may be the closest the band have come to channeling the techno of Blawan’s ‘Why They Hide Their Bodies Under My Garage’ that they famously covered. – Nialler

For Those I Love‘s debut album For Those I Love is an emotive story of love and loss in modern Ireland and ‘Waterfalls/To Live’ is one of its shining moments. Rave influenced downtempo electronic builds a foundation for a spoken word, a self-referential tale of friendship in Dublin. The death of Burnt Out’s Paul Curran last year plays a major role in the album’s story-telling and ‘Waterfalls/To Live’ is a truly poignant tribute. – Kelly Doherty

Ahead of the release of his fifth studio album, Igor, Tyler The Creator issued a warning for fans to not go in “expecting a rap album” and ‘Igor’s Theme’ is a perfect example of how far Tyler has moved beyond his original tongue-in-cheek spitfire flows. The track is a free-flowing blend of 90s turntablism, jazzy experimentation and vocal dissonance that feels like a statement of intent from an artist at the most interesting time in his career. – Kelly Doherty

Hot Chip‘s seventh album A Bathful Of Ecstasy showcases the well-established act doing what they do best – making oddball electro-pop to dance and think to. ‘Spell’ embodies the act’s tried and tested recipe with infectious repetition and simplistic yet universal lyricism. Combining 80s nostalgia with an earnest pop chorus, ‘Spell’ is an incredibly fun ride. – Kelly Doherty

Skepta‘s fifth album Ignorance Is Bliss might not meet the dizzying heights of predecessor Konnichiwa but there are no doubt gems littered throughout and “No Sleep” is one such success. A loose and playful flow is driven by one of the most unique grime production turns of the year so far and Skepta sounds confident and comfortable. Ignorance Is Bliss may lack the introspection of his previous work but ‘No Sleep’ is the sound of Skepta transitioning over to mass audiences whilst still maintaining the heaviness of his legacy.- Kelly Doherty

Mark Ronson’s Late Night Feelings is a masterclass in exactly how to do a collaborative album. With a line-up of carefully selected female vocalists lending vocals to Ronson’s melancholic and understated but polished productions, Late Night Feelings is bound to bear a set of moderate hits for the pop producer. ‘True Blue’ is one such example with the distinctly emotive voice of Angel Olsen driving a dreamy electro-pop love song that perfectly marries Olsen’s lo-fi leaning indie style with Ronson’s pop to make for a memorable, stand-out track. – Kelly Doherty

‘LesAlpx’ marks a successful return for producer Sam Shepard aka Floating Points. A constantly building, techno leaning composition, ‘LesAlpx’ is a tightly-wound journey that threatens to explode at any point but never quite does. – Kelly Doherty

It’s good to have the enigmatic Jai Paul back in action with two surprise new singles and a formal release of 2013’s leaked album Leak 04-13 (Bait Ones). B-side ‘He’ is one of the first new sounds we’ve heard from Jai Paul in over seven years and it makes for an intriguing return. Lush R&B vocals make way for experimental instrumentation that veers between gently ebbing synthesizers and a reverb-heavy, somewhat obtuse beat. It’s a raw and exhilarating affair and it’ll be interesting to see what’s the come from Jai Paul next. – Kelly Doherty

Thom Yorke‘s is back with his first solo release since 2014’s Tomorrow’s Modern Boxes. Album track Impossible Knots is bass-driven that blends indie rock sensibilities with layered ambient textures to create a dreamy atmosphere to get lost in. – Kelly Doherty

‘People’s Faces’ is an emotive ode to finding hope in people even in the darkest of times. Ruminating on societal divisions and hatred, it feels urgent and relevant in a time of political upheaval and anxiety. Powered only by a slow piano riff and Tempest‘s earnest and insightful voice, ‘People’s Faces’ reflects on the best and worst things about what it means to be human. – Kelly Doherty

Blood From A Stone

LA post-punk trio Automatic‘s first song on Stone’s Throw Records is a sleek electronic-tinged affair that embraces disaffection. Sultry vocals and shuffling, self-restrained instrumentation work together in a way that exudes coolness and is over far too soon. – Kelly Doherty

The Irish spoken-word & R&B artist returns with a sharp new single. There’s a real experimental R&B edge to this one, hear mostly in the vocals. Dunleavy’s love affair with contemporary electronica is crystal clear – some very icy synth tones give ‘Better 4 U’ a real edge. The visuals, shot mostly around the Dublin coastline, are superb. – Luke Sharkey

Bantum and God Knows have started establishing themselves as one of Ireland’s strongest collaborative teams and ‘Strongest Thing’ is another slice of this success with extra help from Ben Bix. God Knows’ distinctive laidback flow bounces off Farah Elle‘s more urgent vocal performance. The production is a unique combination of slowed down breakbeat sounds and reverb-drenched guitar riffs making for a track that stands out as different to anything else being released in Ireland today. – Kelly Doherty

‘Real’ is a song that you will have to listen to a few times. There are just so much interesting components to this song without it being overpowering. AMA uses some very interesting samples in the song and manipulates them to fit her avant-garde R&B sound. AMA uses this song to discuss the frustration of trying to reach out to someone close to you yet they refuse to let their guard down, she told Paper magazine in an interview. Her vocals further push this frustration she feels as she bounces between smooth notes over to harsh staggered chorus. – Donal Corrigan

Get Down (With My Love)

After originally appearing in slightly different form last year, The Juan Maclean‘s ‘Get Down (With My Love)’ reappeared last month in bolstered form. Nancy Whang’s vocals still retain that same air of cool which helped define the DFA sound while the rubbery disco synth basses and overt pop sensibilities feel fresher than ever. – Luke Sharkey

Smoko is three solid minutes of raucous garage rock fun from the self-proclaimed “shed punk” band, The Chats. ‘Smoko’ has been a viral hit for Australian trio and it’s easy to see why. Dripping in irreverent irritability, it’s an anthemic foot-stomper demanding to be left alone for a minute and who can’t relate to that? – Kelly Doherty

‘Pak It In’ is a smooth slice of lo-fi bedroom pop. Uly’s soulful vocals and upbeat melodies make for a feel-good moment and another promising cut from the Dubliner.

One day we may just be disappointed with a new Róisín Murphy single, who’s been an absolute roll in terms of once-off releases over the past couple years, but that day still seems a million miles off when listening to ‘Incapable’. Murphy’s lyricism takes the spotlight here like a duck to water. The lilt on second couplet “It’s gone stone cold and you know we should have got it together” won me over straight away. There’s been intangible psychedelia to Murphy’s lyrics and vocals on her recent material. As if her voice floats into the mix from some kaleidoscopic ether. – Luke Sharkey

To celebrate the Toronto Raptors’ first NBA title, Drake released two celebratory tracks, the stronger of which is relatively stripped back ‘Omerta’. ‘Omerta’ showcases just how good Drake can be when gets back to rap basics teaming a meandering but relentless flow with unshowy production. With jabs at Pusha-T harking back to one of last year’s most blown up rap beefs, ‘Omerta’ pulls Drake back from his role as pop culture darling and reminds us of just why he’s so successful. – Kelly Doherty

A fluid piece of instrumental jazz, ‘Crushing Lactic’ is a cacophonous experience. Layers of sound blend together throughout toward a growing sense of urgency driven by syncopated brass instrumentation. – Kelly Doherty

The water in Australia must produce fantastic indie rock. Bonniesongs joins the likes of Courtney Barnett and Julia Jacklin in composing some of the most sincere and compelling guitar music out there right now. The artist, originally from Ireland, shifted continent and scenery sometime ago. ‘Ice Cream’ is disaffected and at times, disorientating. There’s a slight dissonance in the fuzz on Bonnie’s guitar, skewing the harmony – sounding in loose tandem with the warble on her high falsetto. – Luke Sharkey

‘Morning’ is the newest track to be released by the Dublin garage pop/indie band, Squarehead, from forthcoming album High Time to be released on September 27th. The song is a laid back piece almost giving the impression of an Irish answer to someone like Yellow Days, Boy Pablo or debut LP era Mac DeMarco. The riff is a standout piece in the song with a smooth and simple piano that sets the song up with a nice rhythm. The guitar bounces off a simple synth melody, showcasing exactly how garage and pop can come together. – Donal Corrigan

The sad and sudden passing of producer Phillipe Zdar coincided with the week of release for two albums he was involved in that both end up represented on this list. Hot Chip’s A Bathful of Ecstasy and a new album Dreems, from Zdar’s own Cassius project are unfortunately timed examples of his work. ‘Nothing About You’ is an infectious dance track, that demonstrates Zdar’s sensibilities for penning tracks for the dancefloor that brimmed with pop charm. Featuring vocals from Portugal. The Man’s John Gourley, ‘Nothing About You’ channels the electro-synth pop of a band like !!! into Cassius’ own individual sonic imprint. – Niall Byrne