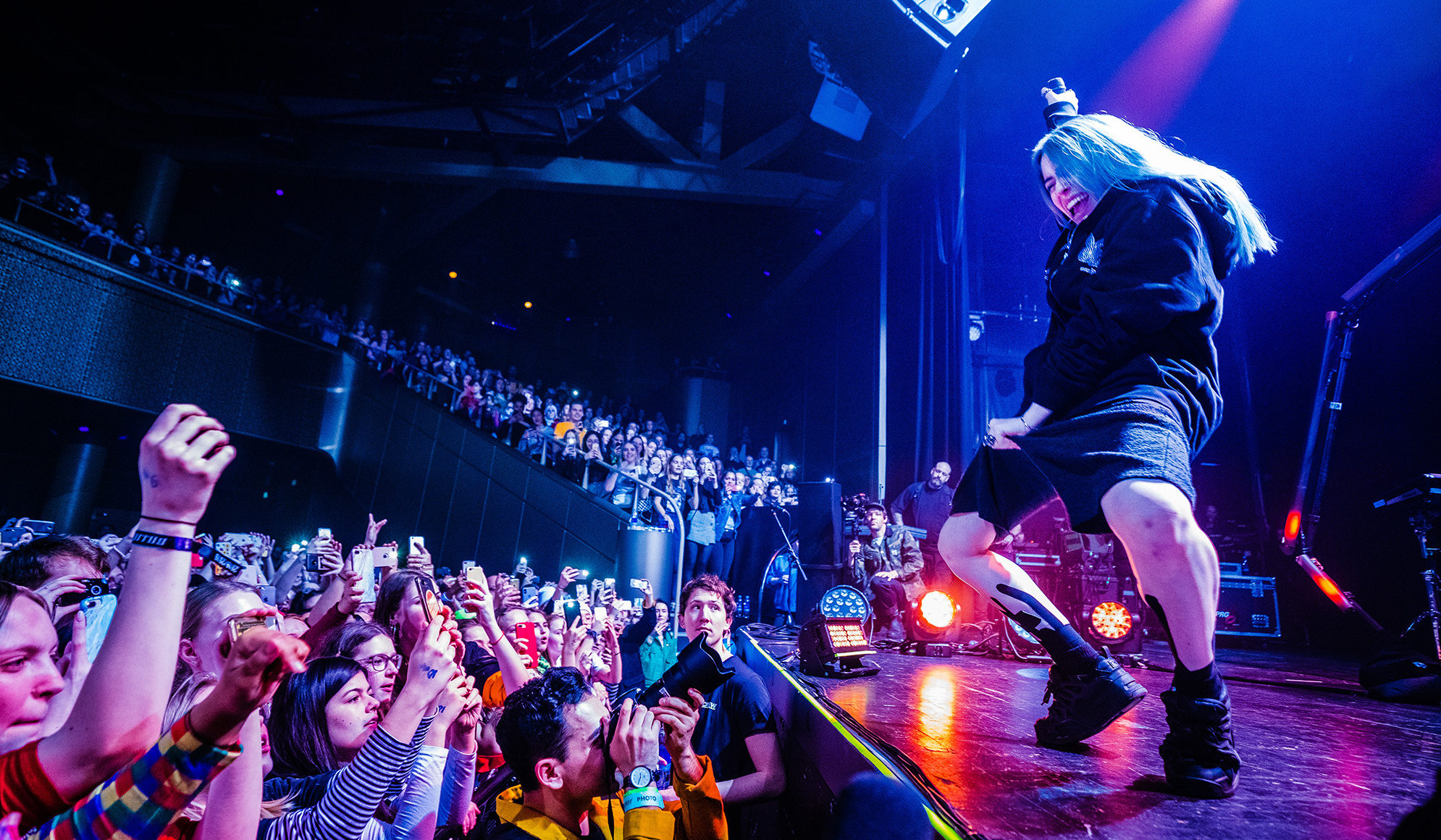 Irish music criticism must be above sucker punches and blind loyalty

It’s been almost two years since Billie Eilish first piqued our attention and she’s done a good job of maintaining it ever since.

Unlike some of her contemporaries that came to prominence around the same time such as Maggie Rogers or Sigrid, the 17-year old has paved her own way down a distinctive path over the past couple of years with idiosyncratic tracks unique to her and a general air of noncompliance when it comes to anything celebrity related.

Her latest single ‘Bury A Friend’ is weird and jarring and its music video is the stuff of nightmares, more Marilyn Manson than Monroe (to be avoided by anyone suffering from trypanophobia). She contradicts just about all of the predefined characteristics of your everyday pop star and yet for all of her recusancy and unwillingness to conform, she exited 2018 as one of the largest streaming artists in the world.

So we were curious to see what Billie’s live show would be like. In Milan, the 3000-capacity music venue Fabrique, there is tangible excitment in the air for her arrival. A giant LED spider with disco balls for eyes bears an eerie resemblance to Aragog from Harry Potter and serves as the centrepiece of the stage. He towers over a humble two-piece band set up, which will later be manned by Finneas, Eilish’s older brother with whom she writes and records her material, and a drummer. Finneas is credited as the only producer and co-writer on Billie’s upcoming album When We All Fall Asleep, Where Do We Go? which is a considerable feat when most pop songs involve five+ writers at a time, let alone the myriad of producers who are recruited to lend two cents.

When we first wrote about her, we mentioned that Billie wasn’t old enough to drive yet (she still isn’t) which is something she has in common with a lot of her Milanese fans at this gig. Teenagers with blue hair and piercings bearing an uncanny resemblance to the headline act dominate the venue and parents can be seen standing further back. As the lights dim, the spider comes to life through an impressive light show that travels one bulb at a time through its legs and arms until Billie eventually appears at its crown, rendering pure hysteria in the room. The opening synths of ‘My Boy’ trigger near pandemonium as a sea of iPhones are raised into the air, where will unfortunately (and somewhat impressively) remain for the remainder of the gig.

After the high energy opener, ‘Lovely’ and ‘idontwanttobeyouanymore’ feel like strange follow ups and I worry for a moment that Billie will struggle to sustain the interest of the now hyped up audience with slower numbers, but I need not have worried. Where the slower songs lose tempo, they gain in production value with new and improved arrangements and far richer soundscapes than we’ve heard on the recorded versions. These new arrangements render disinterest impossible.

It’s a remarkably well-considered and curated show and yet none of it feels staged or repetitious, which is sometimes the case with big tours. Intervals in-between songs are made up of glitchy mashups of the tracks coming later in the set, which makes it feel like we’re part of a spinning game wheel deciding what song comes next. Snippets of classics like ‘It’s A Hard Knock Life’ feature here too, and Finneas habitually hops down from his keyboard complex and carries out choreographed dance moves with Billie.

It’s several songs in, when she’s performing the Vince Staples remix of ‘Watch’ that she gets distracted by a casualty in the front row and demands security tend to a fainted girl, and a compassionate dialogue about caring for your neighbour ensues, “you guys are way more important than I am – if you see someone beside you who doesn’t look ok, take them outside. I’ll still be here when you get back”.  As role models and their ethos go, this is a good one.

It’s evident from the get go that Billie is an interactive and natural performer. In ‘Bury A Friend’, she omits the word “scream” in the second verse and invites different sides of the audience at a time to scream out loud instead, while in ‘You Should See Me In A Crown’ she commands a near mosh pit in the centre that sees worried expressions pass between security guards.

The gig is successful in many ways but in particular, in showcasing the many different sides of the singer’s eclectic personality. ‘Party Favour’ is fun and light, while the exquisite ‘Six Feet Under’ leaves several people drying their eyes. Before she launches into ‘when the party’s over’, she makes a short speech about the prevalence of social media and requests the crowd to be present for a moment and lower their phones (few comply) to simply absorb the music as it is right now. It’s moments like these in the set that remind you of Eilish’s sheer and raw talents as an artist, gimmicks aside. For all the mechanical contrivances and choreography that elevate her performance throughout the show, she can also standalone as a stunning and emotive vocalist with an ability to silence even the most prolific whisperers at the back of the room.

‘Bellyache’ is one of the songs that started it all two years ago, and it feels like the song the crowd are waiting for. Eilish has her work cut out for her in being heard over the sea of voices singing her lyrics back to her to which she eventually succumbs, taking to conducting the audience rather than battle over them.

When we wrote about Billie back in 2017, we said that we were yet to see the best of her and we were right – but we have a feeling that her best will surpass itself and that’s something worth sticking around for.

Billie Eilish’s new album When We All Fall Asleep, Where Do We Go? is out March 29th.

Irish music criticism must be above sucker punches and blind loyalty