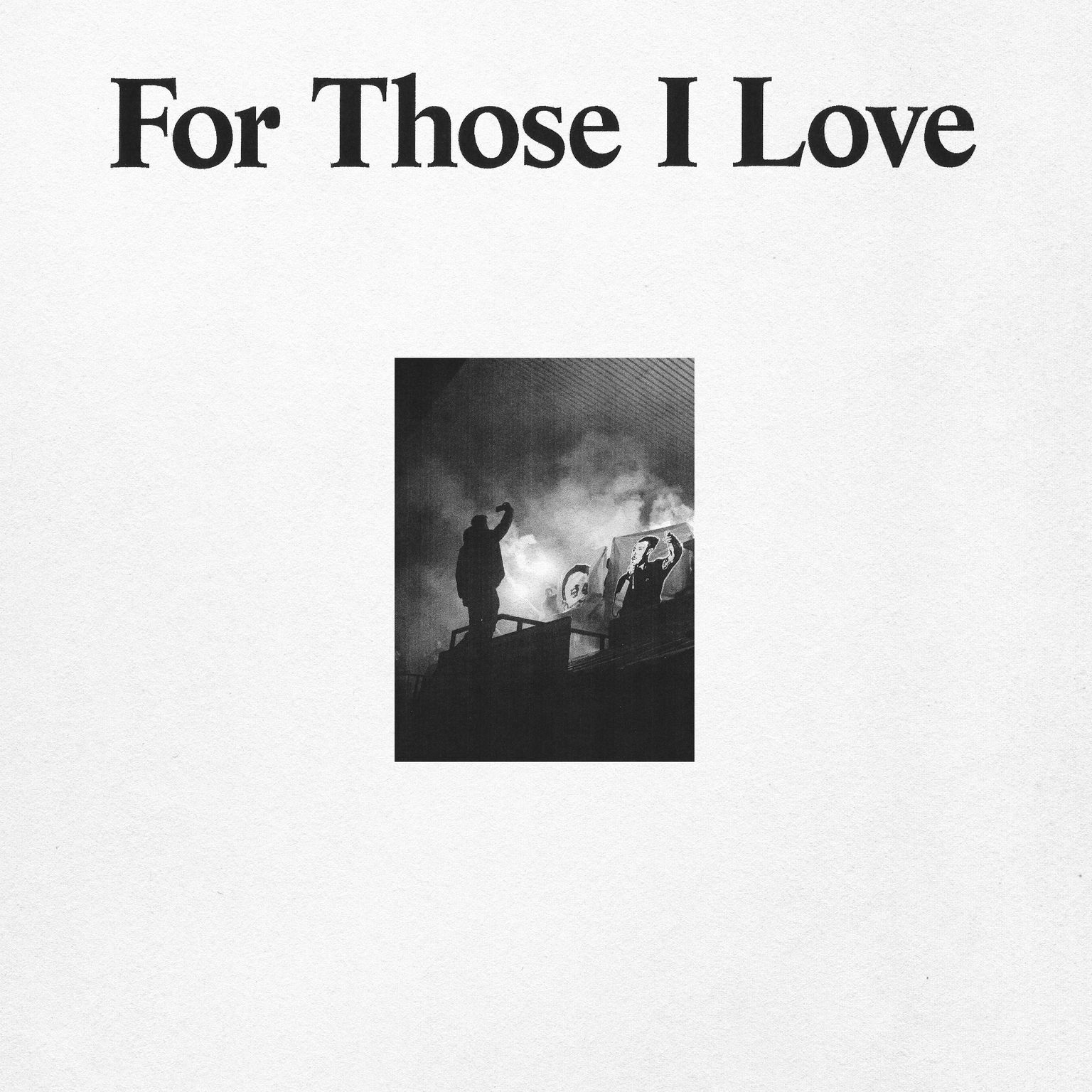 
When Dubliner David Balfe first released For Those I Love, the album dedicated to his friends and particularly the passing of Paul Curran, it was never intended to be anything more than a Bandcamp release.

But the album’s fierce narrative of grief, pain and coping with loss and loss of hope in the wake of a friend’s death is so palpable, so real and so expressive, that the record is deservedly getting a full and critically-appreciated release on UK label September Recordings (run by Adele’s manager Jonathan Dickins) right now with five-star reviews across the board

While the content of the record has been much discussed here and elsewhere (I’d recommend a read along of the lyrics), this article is going to focus on the production of the record, namely the samples that since cleared by the label, have allowed the album to be released commercially.

As well as audio taken from video recordings made by Balfe, Curran and friends (either as the band Burnt Out, the band Plagues or just generally hanging out in Coolock) alongside personal Whatsapp messages throughout, are also a lot of references to other music that inspired Balfe – The Streets, The Blaze, this Mount Kimbie ‘You Took Your Time’ video, Whipping Boy, A Lazarus Soul and Balfe’s musical peers Pamela Connolly of Pillow Queens, Gavin White of White Collar Boy and James McGovern of Murder Capital.

People have asked me about the ‘crying on the couch to When We Were Young’ line. Although it’s assumed it’s reflecting on past days, it’s actually a reference to When We Were Young by the great @WhippingBoyBand . Still gives me a lump in my throat. #TimsTwitterListeningParty

Balfe’s sonic talent is evident across the album’s nine tracks – drawing from euphoric rave, UK garage, classic folk, soul and trad as it creates a swirling heady mix of music for Balfe’s anger, frustration and searing pain to be conveyed.

So let’s look at the samples on each track. A Spotify playlist of the samples and influences are here.

‘(No One Knows Me) Like The Piano’ by Sampha

The first sample on the record comes from a song with a similar theme to the For Those I Love record. “(No One Knows Me) Like The Piano” is a devastating song by Sampha about the passing of his mother, and the piano that occupied her home since Sampha was three. The piano would go on to form the bulk of his album Process. Balfe uses a loop of the piano tones as the opening bars on the record to set an evocative picture of his friend Paul Curran, later also used in refrain on the last track ‘Leave Me Not Love’.

‘Why Do Fools Fall In Love?’ by The Happenings

The line “I have so many doubts” from the 1967 song from the New Jersey band The Happenings is first heard at 1:12 on the opening track on the album.

The faraway synth line first heard clearly at 2:02 and then throughout on ‘I Have A Love’ is actually the brass melody on this 1981 track with effects.

The “And I need love” line in the chorus of this song is effects-processed as the hook here.

‘Royal Canal’ as recorded by The Clancy Brothers

A Clancy Brothers live album is the origin for the line “I think you may all have heard of our poet, at the end of the song (4:47)” a clear reference to Paul Curran’s reputation as a poet. In the live recording, the Clancy brothers are talking of Brendan Behan, who has recently passed at the time of recording and spent time in prison for “Anti British activities” which overlooked the Royal Canal – “they say in Dublin, the smell of the Royal Canal is one of the sights of the city.”

‘Everything I Own’ as recorded by Barbara Mason

While Bread recorded a version of ‘Everything I Own’ in 1972, it’s the Barbara Mason version of the song which is sampled throughout ‘To Have’ – in the line “Just to have you … back again”, which appears at 1:14 in the original.

3. To Have You – The second audio recording at the start of this track still fills me heart and breaks it
It’s from when we were filming Dear James. We made smoke bombs from tin foil and ping pong balls. My Da was saying it would never work. But it did. I loved it.

‘Love Is Kind’ as recorded by The Clancy Brothers

Another Clancy Brothers song is heard on the outro of ‘Top Scheme’.

4. Top Scheme – Top Scheme now. The synth sound in this track is the same I made and used in a track with an old project I did with Pamela from @PillowQueens called Mothers & Fathers. Also all made in that shed.
I miss those days. #TimsTwitterListeningParty

‘Hit Then Run’ by Jammz

This UK grime track is sampled at the very start of ‘The Myth / I Don’t’ with the “Wait!, Yes” line heard on the original at 1:35.

‘You’re The One For Me’ by The Edwards Generation

As far as I can make out the main vocal hook used on ‘The Myth / I Don’t’ comes from this song albeit chopped and screwed. The vocal tone has a classic soul vibe that is very Dilla-esque.

‘The Shape Of You’

“The Tracks of My Tears” performed by Smokey Robinson

‘Tracks Of My Tears’ is a very well-known song so fair play to whoever cleared the main chorus sample for the For Those I Love record. It appears at 1:04 on ‘The Shape Of You’.

‘She Won’t be Gone Long’ by The Sentiments

The Sentiments’ California Soul 2018 song is featured throughout ‘Birthday / The Pain’ with the lines “I keep giving up on love”, “whispering words of freedom” and “keeps on walking away / running away” used alongside the song’s bright brassy melodies.

“There’s Never Been No One Like You” by Kenix feat. Bobby Youngblood

The 1980 disco classic gives the For Those I Love song both its title and its main sample.

‘You Live’ / ‘No One Like You’ is a song that also namechecks a lot of Balfe and Curran’s friends, whether they are friends who went to see Shelbourne FC together as well as the players. It also namechecks the aforementioned local music artists – Pamela Connolly of Pillow Queens, Gavin White of White Collar Boy and James McGovern of Murder Capital.

A Lazarus Soul, The Blaze, Mike Skinner, Vanessa Carlton, Disorder by Joy Division, The Pogues are mentioned alongside writers and poets George Moore, Keats, John B Keane and the 2015 film Catch Me Daddy. All are listed of as they are influences of Paul Curran’s.

‘Leave Me Not Love’

As a refrain of the album’s opening song ‘I Have A Love’, ‘Leave Me Not Love’ uses the same Sampha and Sonya Spence samples, along with two additional others.

‘The Sweetest Pain’ as recorded by Dexter Wansa

‘Cryin’ Like A Baby’ as performed by Jackson C. Frank

It’s fitting that the album would close with a sample from Jackson C. Frank, who Balfe said on Tim’s Twitter Listening Party last week, was an act that both Balfe and Curran loved. Curran had a Jackson C. Frank tattoo as seen below.

There’s also a reference to the Burnt Out song ‘Dear James’, which both Balfe and Curran were in.

The album ends on a reimagining of Cryin Like A Baby by the wonderful Jackson C Frank. I’ll keep private the significance this track holds for me, but my best mate Paul, who this record is about, had a beautiful portrait of Jackson on his forearm.#TimsTwitterListeningParty pic.twitter.com/6zBFnUJWLG

9. Leave Me Not Love – This is a reference to the great 19th century author and musician Sydney Owenson. There’s a great Lyric feature called ‘The Wild Irish Girl and her Harp’ with a version of it on it. #TimsTwitterListeningParty