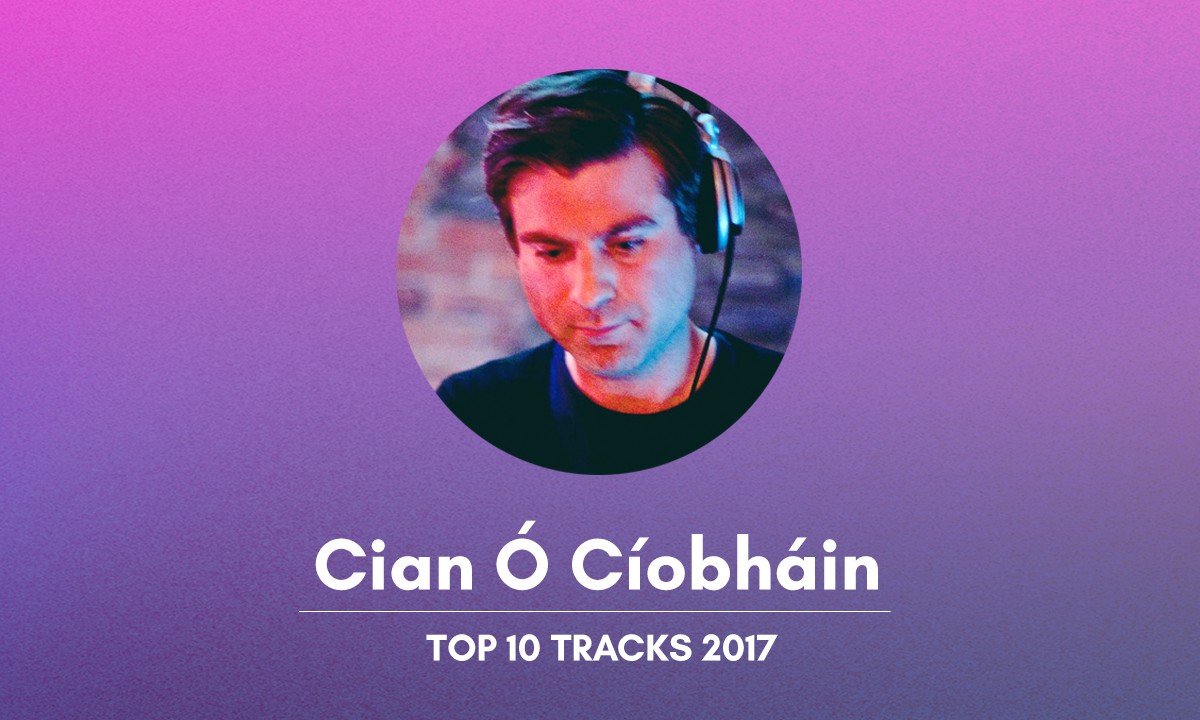 Cian Ó Cíobháin is the presenter of An Taobh Tuathail five nights a week on Radio na Gaeltachta and is a sometime wedding DJ too. (read about his love for cassette tapes here ).

See all the guest selections of 2017.

This twenty minute track that takes up the entirety of Side 1 of The Jimmy Cake’s epic 2017 album on the mighty Penske label is one to revel in. Stick it on, don’t skip, just let it unfurl. Lose yourself in that brooding, John Williams-does-Sci-Fi synth intro, the wonky psychedelia, the trance-inducing tribal drumming that unexpectedly merge out of nowhere and that balls-out warehouse techno crescendo. Superlative stuff from the consistently inventive Dublin band.

Phil Eleverum’s 2017 record ‘A Crow Looked At Me’, which documents his response to the death of his wife from cancer is one of this year’s most heartbreaking listens and this requiem in particular touches every nerve.

I honestly didn’t know what to make of this when I first heard it. Jean-Michel Blais opens with a pretty piano solo that wouldn’t sound out of place on a Nils Frahm recording. Soon producer CFCF puts this through the ringer with a hyper-glossy, EDM-style makeover. This is where the worlds of neo-classical and neo-trance collide. It shouldn’t work, but to their credit, they merge these unlikely bedfellows with aplomb.

I picture Ariel Pink as the kind of guy that could pretty much accept any kind of musical challenge. Dare him to compose a song about a long-forgotten cult sixties songwriter, whilst incorporating nods to ‘Light My Fire’-era The Doors and Ramones bubblegum pop. No bother, he’ll do it. He’ll even add some cheerleader-style chants to make the chorus even more exhilarating. Not only has he managed to connect all these dots with ease, he’s also delivered one of 2017’s most rousing pop songs. Altogether now: “He was a Tinseltown tranny, the mayor of the sunset strip”.

Hands down the most euphoric dancefloor tune of the year. New York early-80s disco looped, tweaked, filtered and re-rubbed until it explodes into that hands-in-the-air crescendo so beloved of clubbing lore. Yes, THIS is the moment you’ve been waiting for all night long!

n 2017, Kaitlyn Aurelia Smith released her second album, an extraordinary record, while experimental in nature, still manages to retain its core pop sensibility. This thrilling alchemy that merges both experimental and pop music is a rare talent that only true music prodigies possess. ‘A Kid’ is the kind of out-there, bewitching, psychedelic pop song that Animal Collective have consistently delivered, music that is structured in a way that’s impossible to predict what might happen next, but with a spectacular pop pay-off. Don’t forget, this is only her second long-player. Who knows what memorable works she’ll bestow upon us in the years ahead?

This originally came out in 1981, but it was nigh impossible to locate until the exemplary Foom label re-released it recently (which qualifies it as a 2017 discovery for me). Peter Gordon is a much revered New York experimental composer and musician, who has music connection with the ilk of Arthur Russell, Laurie Anderson and The Flying Lizards and who was also an influential figure on DFA’s James Murphy. Recently Peter tweeted my show to share that this particular piece of music was composed in Dún Chaoin in west Kerry, overlooking the Blasket Islands. I was listening to this entrancing, hypnotic, motorik masterpiece for weeks before I realised this and would never have conceived it was created so close to where I grew up. Regardless of any links to my homeplace (’twas far from condos where I was reared), this is one of the most riveting wisps of music I heard all year.

After the Japanese producer’s recent battle with throat cancer, he returned with one of the most poignant albums of the year. I can’t claim to understand the science of music and why a particular melody can instantly reach inside you and shake you to the very core and I don’t know if Sakamoto can explain this either. But he certainly knows how to create deeply emotional music. As soon as you hear the opening twenty seconds of this, I guarantee you’ll stop whatever you’ve been doing. Transcendental stuff.

The Feelies – In Between

Stunning title song from one of the year’s most assured and confident records, courtesy of New Jersey’s legendary The Feelies. This is taken from an album that somehow manages to sound both laidback and intense. The rhythm propels me to daydream of a scene straight out a Richard Ford novel. Driving on a wide open road on a hot, sunny day, cedar trees whizzing by, as a dog (with a penchant for early R.E.M) hangs out the window, tongue lolling with glee, its nostrils abuzz with the stereoscopic bombardment of summer’s fragrances.

New York-based producer and modular synth enthusiast Max Ravitz (Patricia) is a man driven by the conviction that music should stand for itself and insists that we shouldn’t dwell too much on the background or biography of the composer. He places higher regard on a how each individual listener might personally experience a piece of music. Seeing that this particular listener tends to obsess over context and creating links between how a piece of music might connect with other music, art, books, dreams, poetry, I’ll hold my whist on this one, so I won’t colour your pre-conceptions with my own personal observations. The only thing I do ask is to listen to it in one sitting. No skipping. Totally immersed.

See all the guest selections of 2017.