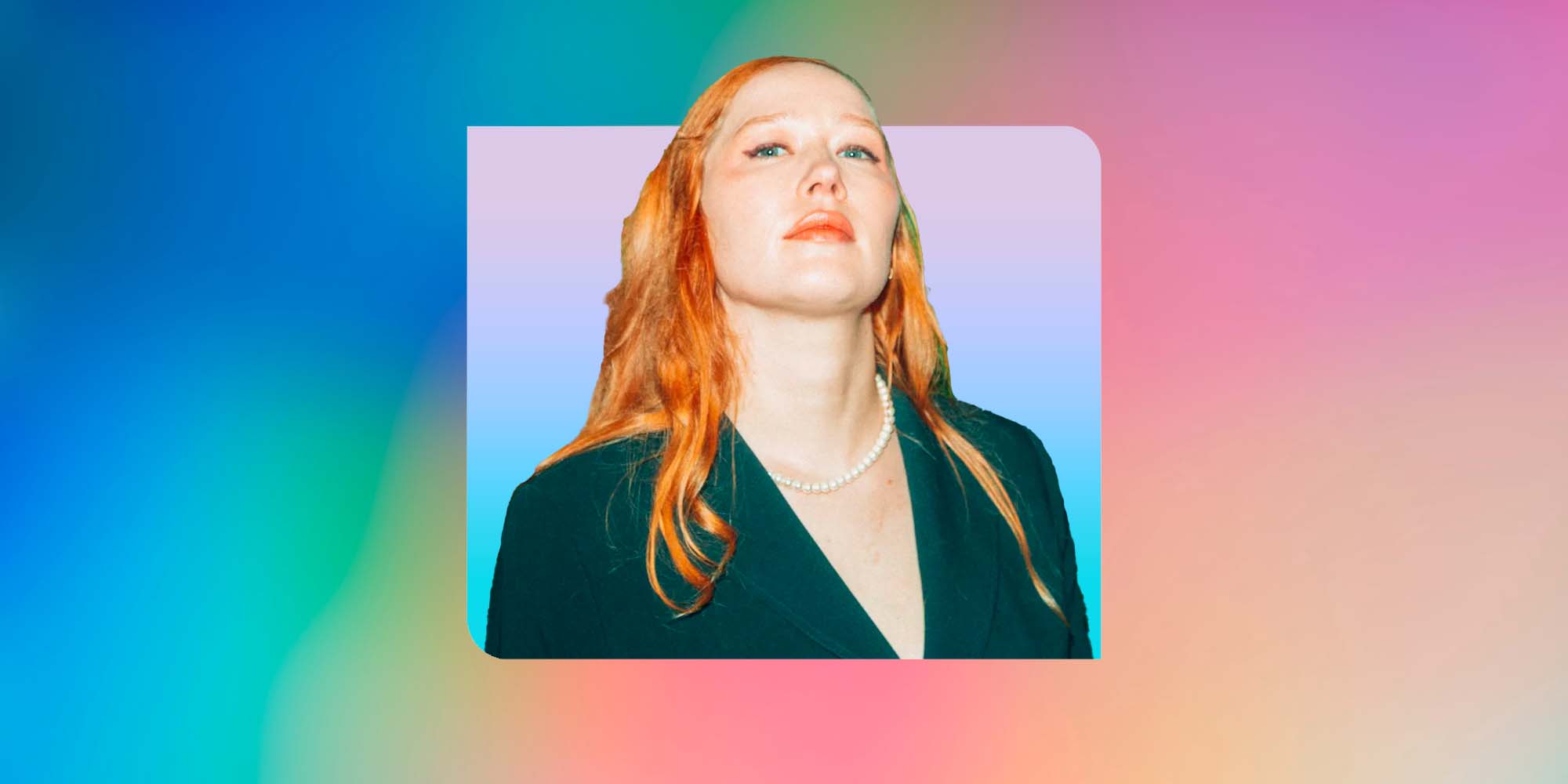 From the gorgeous album The Distance Between Heart and Mouth released last week from Cork-based artist Elaine Howley on Belfast Touch Sensitive Records.

After ‘Silent Talk’, ‘To The Test’ finds a hypnotic pocket of rhythm for Howley to sing over – it’s simultaneously expoerimental folk, and soul, a unique place to arrive.

The Distance Between Heart and Mouth came from an audio diary Howley was keeping on a 4-track cassette machine during 2019 and 2020.

The album is on Bandcamp.

From In the Beginning, Vol. 2, a collection of music made by old pals of producer Madlib and Declaime aka Stones Throw Californian artist Dudley Perkins rapping between 1993 and 1996 when they both lived in Oxnard, California, comes this easy across the ages classic-sounding rap track.

Be Careful With Yourself

There’s a vulnerable honesty to Julia Jacklin’s new song ‘Be Careful With Yourself’, from her third album Pre Pleasure. The Australian singer-songwriter has often been able to put the listener into the shoes of the narrator, whether it’s articulating the pressure felt to shake off a breakup, recounting the actions of a toxic ex that results in being kicked off a plane, or worrying if that nude perhaps that same ex has will be used against you.

‘Be Careful With Yourself’ is no different in its similar abilities, but the mood is different, and all together more hopeful.

The song finds Jacklin gently asking of a partner to look after themselves, to keep doctors appointmеnts, to stop smoking and drive to the speed limit. This isn’t a relationship that has resorting to nagging, it’s a loving one that Jacklin wants to last, hence the requests to stick around – “I’m making plans for my future and I plan on you being in it”.

There is a healthy encouragement to remain open and talk, despite Jacklin’s admission that “I know you were raised by the church and encouraged to keep it all.”

It’s a love song grounded in the familiar and every day, that also echoes in its final verse, the absolute vulnerable dependency of a relationship – “From now on, in you I put all my trust / Now that I know there’s nobody coming to save us.”

In putting together one of the recent release roundup, I came across the music of Chicago artist Claudia Ferme, AKA Claude, and this sumptuous slice of dream-pop music, hitherto unknown to me.

An excellent debut album is called a lot’s gonna change.

The presence of Atlanta duo Earthgang and Pharrell on this track alerted me to the existence of Houston rapper Tobe Nwigwe, a supremely prolific artist it turns out, who is doing exciting big things with music and visuals.

There’s a fine line in interestingly choreographed music videos with style to watch.

See the 2020 New York Times article: Tobe Nwigwe Never Planned to Go Viral. Then He Rapped About Breonna Taylor for an intro.

The Moscow-born artist Ivan Solimani Leznhev is a young singer-songwriter who “soulfully blends early psychedelia, glam and indie rock” on a debut album called Brand New Power out today on Erol Alkan’s Phantasy Sound. ‘Cold Wind’ is a beaut of an intro to it.

Listen to our podcast episode about Beyoncé’s Renaissance.

Kieran Hebden doesn’t stop does he? As heard on recent live sets, this track is one of those indecipherable ones that popped up on Spotify and Bandcamp, but it’s the track with the vocal break that goes “i’ve got feelings.”

The Chicago duo of Julien Ehlrich and Max Kakacek aka Whitney are evolving their sound in a fresh way as heard on songs like ‘Memory’, the latest track from their album Spark, due September 16th on Secretly Canadian.

The lyrics of ‘Memory’ illustrate someone processing and eventually accepting their fear of death. Halfway through writing the song our bandmate Will Miller sent along the chords for what would become the outro of the song without ever hearing “Memory.” It was one of those harmonious moments where two separate ideas somehow fit together immediately. The final third speaks to the afterlife in a way we wouldn’t have been able to match with words.

The Kildare 24-year-old, DIY slouch rock musician Aaron Corcoran aka Skinner (DOI: I manage the artist) follows up his recent “weird disco” song of new wave and post-punk stripes single ‘The Slump’ with a song inspired by the Al Pacino film Dog Day Afternoon, ‘Dog Daze’, out on Faction Records.

‘Dog Daze’ brandishes saxophone angular guitar shapes to underscore the main character’s boiling over frustration and interpolates some of the movie’s dialogue in the lyrics.

What a trio! From the album Cheat Codes, comes this posthumous MF DOOM-featuring track.

The duo of Laura Quirke and Claire Kinsella aka Lemoncello released the first single from since their 2020’s Oil And Water EP, and it’s a gorgeous unfurling folk song across five and half minutes.

“An ode to the cyclical nature of love and life. A reminder that in order to be free, we must at once let the past go while knowing it’s what has given us the resilience to march on.”

A Lemoncello debut album is on the way soon.

‘Loving Girl’ is a simple song, with a simple desire from EFÉ’s forthcoming EP VITAMIN – C out on Wednesday August 3rd via Platoon. It includes previous singles ‘KIWI’ and ‘LIME’.

“‘Loving Girl’ is about the juxtaposition between pleasing other people and yourself. It’s about finding a middle ground while wanting to be liked and seen as this ‘loving girl’. I started creating the song as a joke, so it was actually like 90% freestyle. I feel like it really captured my headspace at that time – feeling disconnected from people because of miscommunication and trying to figure out how to be loved. It ties in with ideas of co-dependency and struggling with feeling like you can’t depend on yourself – that you need someone to make a great song or art, or to be in a relationship. That is why it was so important for me to include the song in the EP, as it was me challenging myself and depending on my ideas.”

Polish mutant techno vocal artist Martyna Maja aka VTSS has already made us scream and been incredibly annoying this year and the latest track ‘Body Mind Hell’, drawn from the forthcoming EP Circulus Vitiosus out 16th September on Ninja Tune, is as corporeal as her DJ sets get. It’s also a lot, a lot of fun.

Nation Of Language’s Aidan Noell & LCD Soundystem’s Nancy Whang team up for a cover of Detroit techno classic from A Number Of Names, with production and mixing by Nick Millhiser of Holy Ghost!.

Edge Of The Edge

Built on a sample of the 1963 song ‘Denise’ by Randy & The Rainbows, Panda Bear and Sonic Boom’s ‘Edge Of The Edge’ is the lilting and open-hearted latest from their forthcoming album, Reset out on August 12th on Domino.

The Dublin four-piece indie band Still Blue are one of my favourite new Irish discoveries of 2022.

The music that vocalist/songwriter Nicole Lyons, lead guitarist Ruairi Forde, bassist Noelle Duffy and drummer Gregory Kearns make caught my ears with their great second single, the melodic indie track ‘Whatcha Gonna Do’ in March, and I invited them along to showcase at Output in Belfast the next month.

The band’s new single ‘Ladybird’, a track that was written in the deepest recess of lockdown that “speaks on feelings of isolation and the longing for human connection.”

‘Backwash’ was aired in recent Dublin Gilla Band residencies and gigs, and feels like the Dublin band are injecting some new sounds into their trademark, it’s a bit more wobbly and rhythmic than usual, without losing the identity they have established.

Look away now, if it’s subtlety you’re seeking, as I. Jordan (FKA India Jordan)’s new track is a blare of sirens and fizzy sherbert beats.

“Hey Baby is a fun club track that doesn’t take itself seriously! I’ve been playing it in clubs and festivals for the last year and it’s always gone down a treat” they comment,” says Jordan.

After a recent show at the Bello Bar, the North Carolina singer and guitarist Jake Xerxes Fussell has been announced to return to Dublin for a show at Whelan’s this October.

Fussell’s music is informed from his time with his father Fred C. Fussell, an Alabama folklorist, curator, and photographer who took his son on the road while he was recording blues and folk songs and musicians.

In January, Fussell released his fourth album of bluesy folk music entitled Good & Green Again, and this lilting folk tune is off it.

Fred’s fieldwork took him, often with young Jake in tow, across the Southeast documenting traditional vernacular culture, which included recording blues and old-time musicians with fellow folklorists and recordists George Mitchell and Art Rosenbaum (which led Jake to music) and collaborating with American Indian artists (which led Jake eventually to his graduate research on Choctaw fiddlers..