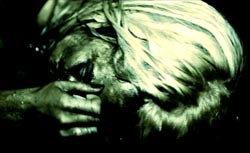 If you’ve been following the latest music video viral whodunnit?, you’ll know all about two mysterious Youtube videos that hit last month from someone calling themselves iamamiwhoami. The two teaser clips featured ill-boding electronic music, limbs flailing from forest trees, something gross bubbling out of what looks like a duck’s arse (disclaimer: I’ve never examined a duck’s arse), a blonde woman covered in black goo licking bark (naturally), an owl and other weird shit (watch them after the jump).

Guesses for who the artist was included The Knife, Goldfrapp, Christina Aguilera and MGMT. This morning another clip debuted. Tagged with keywords like “foetus”, “amniotic fluid” “umbilical cord”, um “cream gateau” and featuring more footage of the woman in a foetal position and a whale, I’d say this mystery is about to reveal itself over the next week or so.

For the record, I think it’s more likely to be The Knife cohort Planningtorock or San Fran’s oOoOO or The Golden Filter (though they’re already on a viral tip). The Goldfrapp guess is most popular at the moment thamks to a fake twitter account by a PopJustice forum member (and they’ve featured owls before) but it feels too dark for them, especially after hearing ‘Rocket’ but there’s also a case for Christina Aguilera (who apparently worked with Goldfrapp on some songs) and also this image on a Sony BMG site suggests so. Damn, did I just get swindled into posting about Christina Aguilera? What do you think? Hopefully it’s someone completely random.

The best entries in the Rubberbandits drawing competition