Here’s a roundup of all the Record Store Day Ireland activity for April 20th so far. If you’ve anything to add, leave a comment below. Record Store Day is the opportunity to celebrate music and the places that facilitate not just the purchasing of music but the sharing of ideas and information, where friendships are made, where bands are formed, where music is played, where that song you’ve never heard before stops you in your tracks and you must know what it is. Record Store Day is about music people not limited edition exorbitantly priced 7″ singles. Show some love.

First up, a full list of records stores participating in Ireland and the list of special releases available worldwide.

Elastic Witch will have lots going on on the day but before that Gib Cassidy will be releasing one of the best albums of the year so far on vinyl on the first release on Elastic Witch Records – I Am The Cosmos‘ Monochrome. Limited to 250 copies only and for sale in the shop.

There’ll be an I Am The Cosmos launch gig in Twisted Pepper that night alongside Floating Points, Lasertom, Frank B & more. Elastic Witch will be running things in the Twisted Pepper café alongside that with DJ sets from Toby Kaar, TR One, Skinny Wolves, Darren McCreesh (Strange Passion), Mici Durnin (Maximum Joy) and Gib Elastic Witch with more to be announced. Overhead The Albatross, Bouts and Stop All The Clocks will also be playing from 8pm.

Live in the shop that day will be Tieranniesaur, Sea Pinks, Squarehead, Jennifer Evans, No Monster Club, The #1s with Cillian McDonnell, Elastic Witch DJs and myself playing records. Event page.

Tower Records will host a bunch of live performances next door to their Wicklow Street shop in Madison where the nightclub will turn into a live venue from 1pm til 9pm on the day. Bands lined up include: The #1’s, Owensie, Blink Yackety, Gyspy Rebel Rabble, The Urges, The Hot Sprockets, The Eskies, Sweet Jane, Ghost Estates, Twilight Sad and more. Under 18s will be able to stay until 6pm. Wristbands for entry can be got at the main counter in Tower next door.

Soundcellar will be doing something for the day too. Event page. 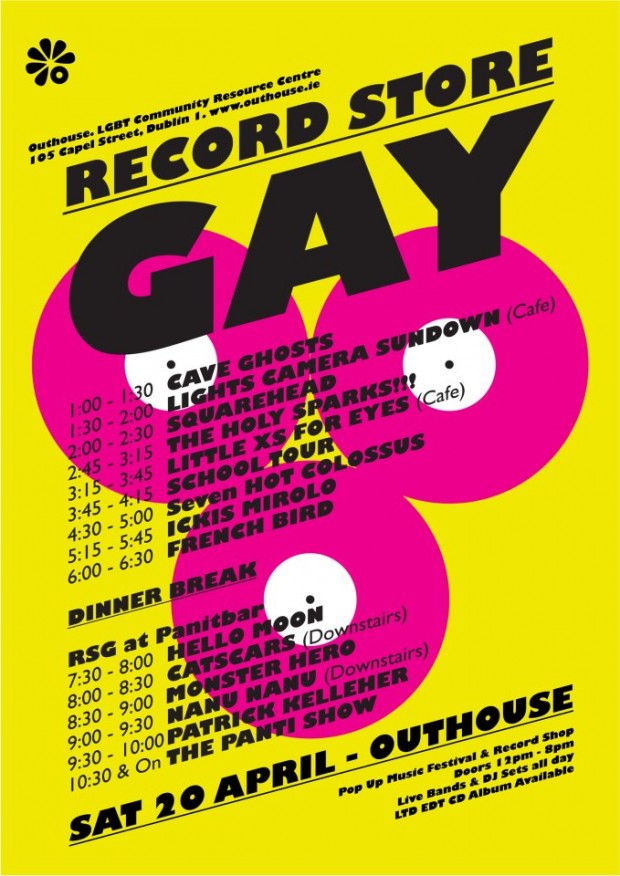 Record Store Gay is back for a second year to raise money for Outhouse, the LGBT community and resource centre. Last year’s compilation featured live bands covering gay anthems and a mini day festival in Outhouse too so expect the same deal this year. Bands lined up include Patrick Kelleher, Hello Moon, The Holy Sparks!!!, Cave Ghosts, Ickis Mirolo & Margie Lewis, Squarehead , September Girls, French Bird, Seeping into Cinemas, Lights Camera Sundown, I Heart The Monster Hero, Nanu Nanu, little xs for eyes, Catscars and School Tour. The festivities will continue later at Panti Bar on Capel Street where some of the bands will perform before The Panti Show starts that evening. Free in. Here’s a trailer of some proportions and Paddy Kelleher covering ‘In Your Eyes’ (on the comp he covers ‘Smalltown Boy’).

Across The Line has a guide to things happening up north. (ignore the Road Records bit though)

DJs including Toby Kaar and Vicky ‘Black Sun’ Langan in Plugd Records from 11am.

The Black Mariah and Plugd Records are bringing Demdike Stare to Cork for a show in the Triskel as part of Record Store Day. There will also be more events/acts announced, playing in the rest of the building. Tickets.

Bell, Book & Candle/Wingnut Records – DJ sets from Community Skratch crew. Turntable/scratch workshops. A Swap Meet in the shop, where anyone can bring their CDs and tapes and vinyls and barter them with others. Cake and Coffee sale with a twist – Local heavy metal bands Ilenkus and Them Martyrs will be out in their aprons serving coffee and blowing up balloons. The cakes that will be on sale will have band and label logos expertly designed on them. The money raised will go to funding a special Wingnut Records split 7inch release later in the year.

Wingnut – An acoustic set from Windings.

Ghost Estates and Twinkranes will release a split 7″ release for the day. It’s a limited run of 250 and will feature a track each ‘In Waves’ and ‘The Wizard’ respectively. There will be a launch gig on the Friday April 19th in the Button Factory for it.

Funeral Suits are releasing their debut album Lily Of The Valley for the first time on vinyl on the day.

The Hot Sprockets are releasing ‘Soul Brother’ on the day on 7″ and doing a launch gig that night in Whelan’s with support from Cry Monster Cry and Markas Carcas. €10 in.

The Statics will release a the Hidden Pigeon EP on the day in at Tower Records, Free Bird Records and Elastic Witch. There will be a launch night in The Thomas House that night. Listen to the band on Soundcloud.

Jai Paul’s LP is leaked on Bandcamp – What is going on?