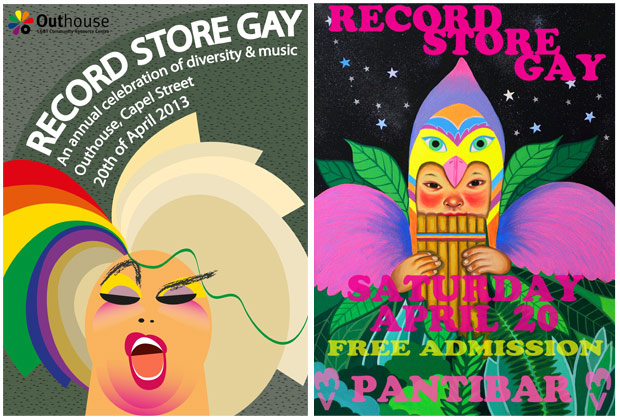 Our LGBT brothers and sisters are the focus of lots of attention at the moment, between retrograde homophobic attacks and the constitutional amendment to extend rights to same-sex couples. With important steps towards progress, there are still steps backwards. Being a young person is hard enough, being one who is seen as different from the majority is even harder. Which is why places like Outhouse are really important. The Capel Street centre in Dublin city offers support to the LGBT community. Last year 25,000 people visited the centre for advice.

And just how Record Store Day is really about community so is the work of Outhouse, often it’s the first point of contact for a young gay person outside their circle. And Record Store Gay is a celebration of both communities coming together to raise money, to celebrate diversity, offer support and have fun.

Kicking off at noon on Saturday, all the bands featured on this compilation (like last year) will be playing Outhouse until 8pm and later on, in Pantibar in the name of Record Store Gay. There will also be popup record stalls on the premises. Donations are encouraged.

Each of the bands have covered a song associated with the gay community or a song by a gay performer. Highlights include Patrick Kelleher covering Bronski Beat’s ‘Smalltown Boy’, Squarehead reworking Madonna’s ‘Material Girl’, Cave Ghosts sweetening Robyn’s ‘With Every Heartbeat’, Ickis Mirolo & Margie Lewis doing The Human League’s ‘Don’t You Want Me’, Little xs for eyes making over ‘Bette Davis Eyes’, Nanu Nanu turning in a version of ‘Relax’ and much more.