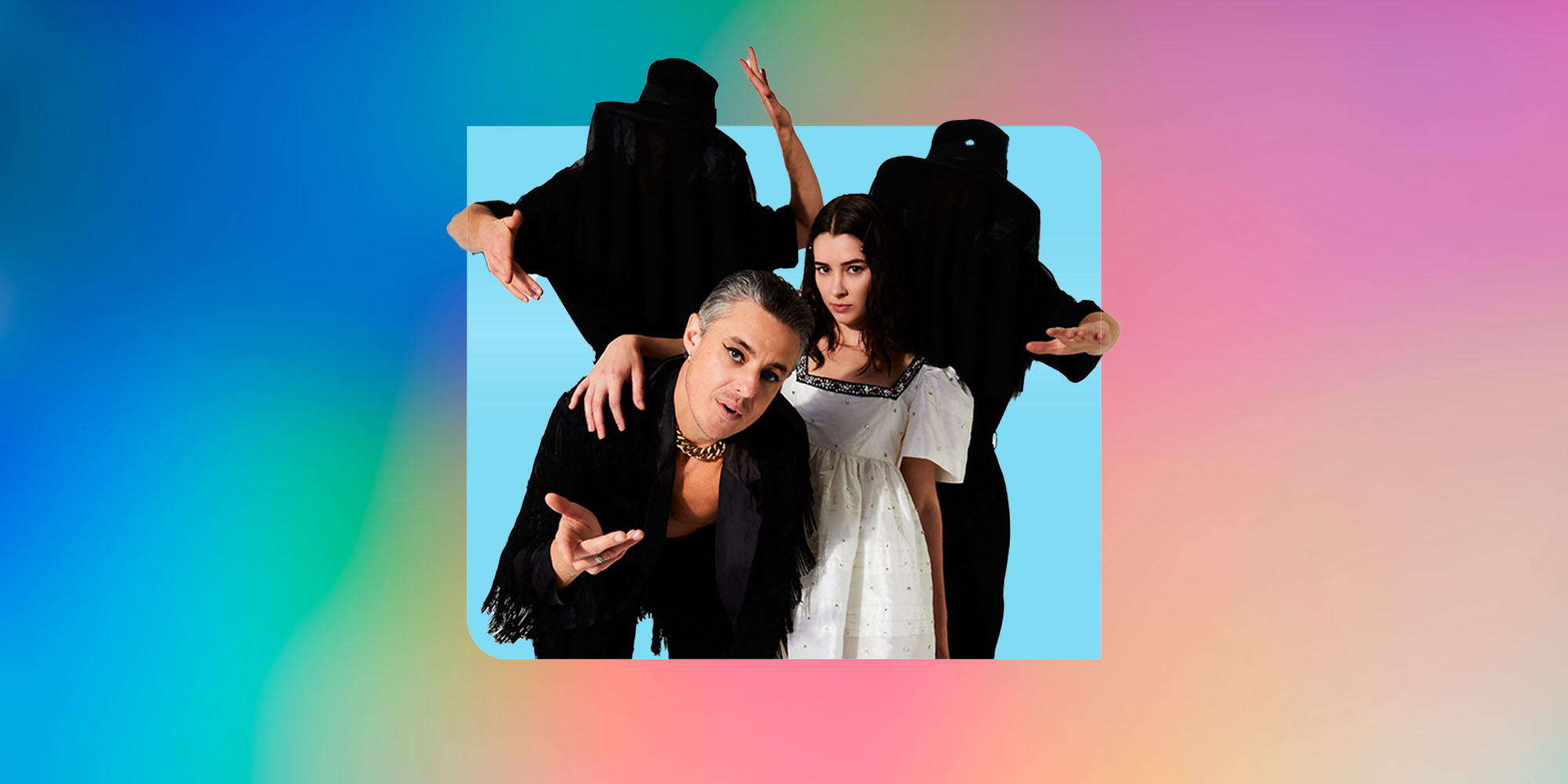 Nialler9’s favourite songs of June 2022, all in one place. See the Spotify playlist at the end of the article.

Yeah so what if it came out a few months ago, ‘Holiday’ is my song of the summer, and Confidence Man are my band of the summer, from their recent late-night Vicar Street show to the Glasto set.

The band’s fizzy electronic pop is anchored by Janet Planet and Sugar Lips. The band’s second album TILT moved them from a novelty act to proper festival buzzers complete with an arsenal of dance moves and upbeat bops with hooks galore.

We really can’t wait for a new album from Australian song bopper Julia Jacklin, as she’s one of our favourite songwriters around these parts.

Pre Pleasure is the new album, out on August 26th via Transgressive Records, and the effervescent ‘I Was Neon’ follows on from ‘Lydia Wears A Cross’.

“I first wrote ‘I was neon’ for a band called rattlesnack, a short-lived much loved 2019 side project that I played drums in. I rewrote it for my album in Montreal, during a time when I was desperately longing for a version of myself that I feared was gone forever. I was thinking of this song when I made the album cover, this song is the album cover really.”

LA singer-songwriter and excellent guitarist Madison Cunningham impressed in a live show in Dublin in May and she’s due back again soon. ‘Hospital’ is an ultra-meldic country-tinged rock track that reminds me of early St. Vincent.

A second album Revealer is due out on September 9th.

Hot Chip have a new album, their eighth, Freakout/Release out on August 19th.

Warmduscher’s Clams Baker is the vocalist with Sworn Virgins.

Alela Diane is one of my favourite American folk voices, since the 2009 album To Be Still.

It’ll feature on her first album in six years

“‘Paloma’ was written down in Mexico during a violent thunderstorm that took out the power for a few days. It is a musing on the volatility of the systems we build, and the knowledge that nature always gets the last word.”

From the Belfast band’s album out in June entitled Living Isn’t Easy on First Taste Records, ‘Chromo Sud’ is a nine-minute track that is chiefly concerned with the Irish housing crisis.

Superb alt-pop smarts from the Dublin artist Anna Leah. ‘I Wonder’ has charming indie undulations and rock dynamics and recalls our gal Julia Jacklin in the best possible way – keeping the vocal front and centre no matter what’s happening.

Add the song on Spotify and add Anna on Linktree.

“Is this the biggest track of the summer?”

That is the email headline that Phantasy Sound piqued by interest with in their mailout.

It’s not, but if you were looking for a track that recalls the indie-sleaze electro-clash, synth-falling-down-a flight-of-stairs then you’ve found the boss level. It’s the sonic boom breakdown that is divisive.

It’s been played out currently by HAAi, Daniel Avery, Gerd Janson and eh, Mel C so you know, it’s catching. I heard Peggy Gou play it at Forbidden Fruit too.

I. Jordan (formerly India Jordan) is here to melt your mind on a big neon dance track that sounds like it’s trying to bring a cheesy 80s TV song undercover into the DJ booth.

About the name change, they say – “It felt heavy carrying around “India Jordan” when it really doesn’t resonate with me anymore.”

The artwork features a photo by El Hardwick, and is representative of this change, focusing on their hair, tattoos and an “J” signet ring Jordan gifted to themselves to celebrate the name change.

“As a trans person I’m forever changing. Being visible in the image without directly showing my face allowed me to avoid capturing something I might feel unconnected to in a few months time, but still shows off parts of my trans-ness”.

Gone In A Minute

Zaska is back with his pal J Smith for this gorgeous slice of neo-soul about climate change. The song is to feature on his upcoming album A Better Way, out on UK label edbl recordings, to be released in the Autumn.

“It’s a song about how fragile and vulnerable Mother Nature is, and that if we’re not careful it’ll be gone. But it’s not all gloom and doom. There’s a positive message that we can get together and do something about turning it around.”

‘Sunset’ reunites the Clare musician with Dublin singer-songwriter Ailbhe Reddy (as they previously collaborated on 2019’s album L.O.S.S.) and announces the start of album three for the artist, entitled I’m Here Now, which will be released on Friday 9th September 2022.

‘Sunset’ is the opening track from the album, and it sets suspended synth chords to Reddy’s vocals that speak of underlying turmoil and relationship breakdown – “If you can’t even look at me / then just stare at the sunset / I know it’s getting late / you don’t have to go yet.”

There’s nothing new at play on ‘Don’t Press Me’, a preview track from Dry Cleaning’s forthcoming second album Stumpwork, out October 21st on 4AD.

Apart from maybe the whistling, its short two-minute running time, and the fact it’s about the pleasure of gaming, “and the enjoyment of intense and short-lived guilt-free experiences”.

“The words in the chorus came about because I was trying to write a song to sing to my own brain, ‘You are always fighting me / You are always stressing me out’.”

Lead track ‘Miracle Mayhem’ is reminiscent of Justin Strauss, Marcus Marr and Joe Goddard’s Extra Credit project while B-side ‘Where We’re At’ is squelchy electro in the style of Boot & Tax, all swirling synths and floaty vocals, over shape-shifting beats. Fun is their ethos and there’s a lot to be had here with these tracks.

Cash In Cash Out

Oof, Pharrell is back on the rap banger tip.

Belfast producer Jordan Nocturne and Meath electro-pop artist Christy Leech aka Le Boom teamed up on a new release on revered German electronic label Permanent Vacation. It’s all acid-tinged tension-filled electronica with a full acid version on the flip of the three-track release.

Following on from April’s song ‘Inhaling’ and news of a deal with big indie MNRK, Dublin artist Ailbhe Reddy has released a new single in June entitled ‘A Mess’.

A rollocking insistent fuzzy rock song, ‘A Mess’ finds Ailbhe in her most sonically-full mode yet on a song about repeating relationship mistakes and feelings of inadequacy.

“‘A Mess’ is about not feeling good enough in a relationship and examining old patterns and habits. It’s about feeling fed up of going around in circles, while focusing on a throw away comment that ‘no wonder it was such a mess’.”

A super impressive indie-pop ditty from Dublin alternative band No Photos who have released their self-titled debut album last month. The vocals are Ailish By Myself, and rapper Zach Okay.

I previously featured ‘Every Single Day’ From the band, who apparently only formed in November last year.

Anna Mieke is the Wicklow songwriter and multi-instrumentalist is looking ahead to the release of a second album after 2019’s Idle Mind with the release of her first single in two years.