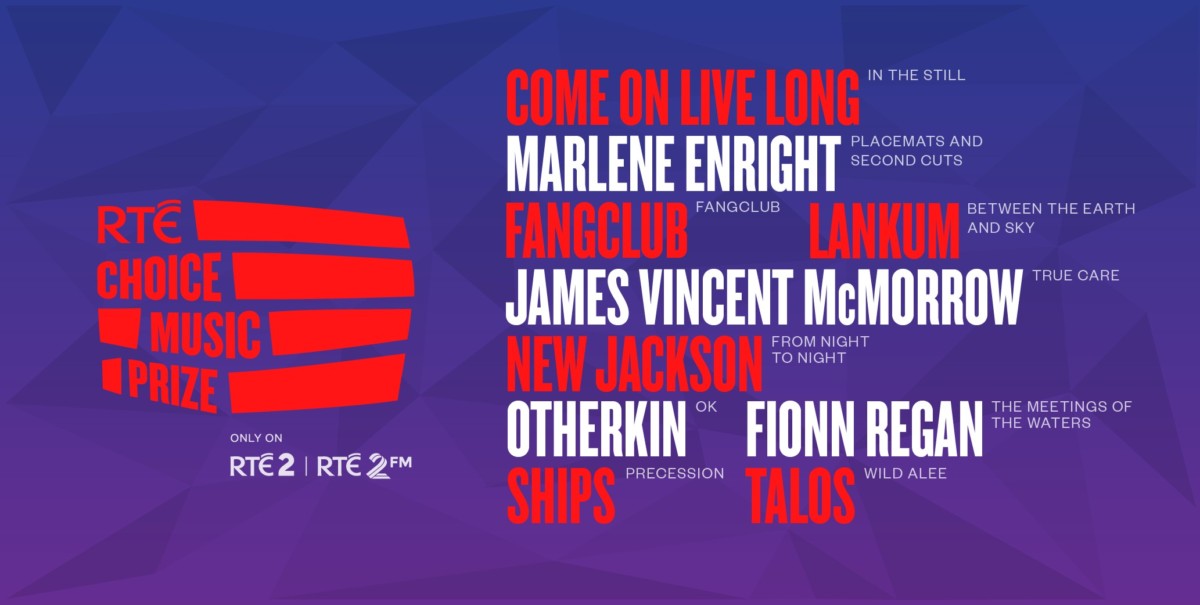 The RTÉ Choice Music Prize have announced the 10 albums shortlisted for Irish album of the year today as revealed on Tracy Clifford’s 2FM show by Choice chairman Tony Clayton-Lea.

The winning album will be revealed at Vicar Street on March 8th after a judging panel deliberation.

The 10 albums shortlisted by the judges for Irish album of the year are:

A very strong list this year. Great to see Ships, Talos, Come On Live Long, Marlene Enright and New Jackson in there – many of which were featured in my Irish albums of the year. We live in a deluge of new music so for those albums to get even to judge’s ears now is no mean feat, not least make an impression. Independently-released albums have to swim upstream and rely on sites like this, word-of-mouth and hard graft to make a lasting impression beyond the week of release in the first place.

Missing from the list? Northern Irish acts didn’t get a look in once again. The NI Album of the Year from Joshua Burnside doesn’t feature, nor does the brilliant debut album from Bicep or And So I Watch You From Afar most notably. It seems the NI / ROI divide remains even if it has certainly improved in recent years.

2017 wasn’t a year that many Irish major label acts released an album save for U2, Van Morrison, Niall Horan, The Coronas and The Script. The Script was pretty much panned across the board and U2’s Songs Of Experience received mixed reviews. It’s December release date may not have helped.

One notable act whose huge success didn’t translate to a Choice Music Prize nomination? Picture This. They may be able to sell out big venues all over the country but this award is for album alone and the critics didn’t pluck for the Kildare boys.

No room for trad acts like Cormac Begley or Martin Hayes and Damien Dempsey fell short of the judges.

About the Choice Music Prize

The winning act will receive €10,000, a prize fund which has been provided by The Irish Music Rights Organisation (IMRO) and The Irish Recorded Music Association (IRMA). All of the shortlisted acts will receive a specially commissioned award. RAAP, Culture Ireland & Golden Discs are also official project partners.

The shortlist for the RTÉ Choice Music Prize – Irish Song of The Year 2017 will be announced on Wednesday 31st January 2018. A special event featuring exclusive performances from both Album of the Year and Song of the Year nominees will be held in Dublin’s Tramline venue that evening.

Tickets for the Choice Music Prize live event on March 8th in Vicar Street are available from Ticketmaster and priced €28 plus fees.

RTÉ 2FM will celebrate the announcement of the shortlist across its schedule throughout the day with All Irish Music All Day from 6am to midnight. Louise McSharry will present a two-hour special programme on this year’s RTÉ Choice Music Prize, Irish Album of the Year 2017 shortlist from 8-10pm this evening. RTÉ 2FM will continue to mark the announcement of the shortlist this week and beyond through a mix of airplay of tracks from the shortlisted albums, interviews with this year’s shortlisted artists and live performances.

As part of the partnership with RTÉ, the event will be broadcast live on RTÉ 2FM in a special four-hour extended programme from 7-11pm and on RTÉ2 as part of a special RTÉ Choice Music Prize TV programme, approximately one week later.